Does Josephus prove a historical Jesus? (The following is part of a 30+page rebuttal to the material in Bart Ehrman’s book Did Jesus Exist? 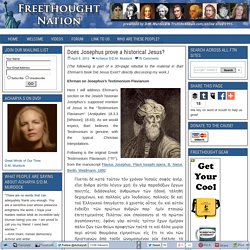 Directly discussing my work.) Ehrman on Josephus’s Testimonium Flavianum Here I will address Ehrman’s section on the Jewish historian Josephus’s supposed mention of Jesus in the “Testimonium Flavianum” (Antiquities 18.3.3 [Whiston]; 18.63). As we would expect, Bart believes the Testimonium is genuine, with the typical Christian interpolations. Following is the original Greek Testimonium Flavianum (“TF”), from the manuscript Flavius Josephus. Ehrman (59-60) provides a translation of the TF from “the best manuscript of Josephus”: At this time there appeared Jesus, a wise man, if indeed one should call him a man. If that passage in its entirety doesn’t sound like a breathless Christian advertisement, I don’t know what does! Bart Ehrman caught in lies and libel? In Did Jesus Exist? 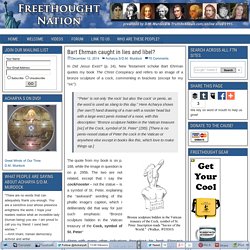 (p. 24), New Testament scholar Bart Ehrman quotes my book The Christ Conspiracy and refers to an image of a bronze sculpture of a cock, commenting in brackets (except for my “sic”): “’Peter’ is not only ‘the rock’ but also ‘the cock’ or penis, as the word is used as slang to this day.” Here Acharya shows (her own?) Hand drawing of a man with a rooster head but with a large erect penis instead of a nose, with this description: “Bronze sculpture hidden in the Vatican treasure [sic] of the Cock, symbol of St.

Peter” (295). The quote from my book is on p. 168, while the image in question is on p. 295b. Along with many other indications throughout his book, Ehrman’s conflation of the quote on p. 168 with the image on p. 295b suggests he did not even read my book but evidently farmed it out and the other works he is critiquing to assistants. Because Ehrman apparently didn’t read my book, he also didn’t notice the citation of Barbara G. Further Reading. The phallic ‘Savior of the World’ hidden in the Vatican. In the first edition of my book The Christ Conspiracy: The Greatest Story Ever Sold (1999), I included a chapter entitled “The Bible, Sex and Drugs” (275-295), at the end of which I provided a line drawing of a bronze, rooster-headed bust with a phallus for a beak. 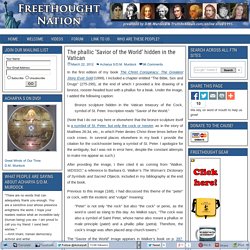 Under the image, I added the following caption: Bronze sculpture hidden in the Vatican treasury of the Cock, symbol of St. Peter. Inscription reads “Savior of the World.” (Note that I do not say here or elsewhere that the bronze sculpture itself is a symbol of St. After providing the image, I then cited it as coming from “Walker, WDSSO,” a reference to Barbara G. Previous to this image (168), I had discussed this theme of the “peter” or cock, with the esoteric and “vulgar” meaning: BART EHRMAN AND THE QUEST OF THE HISTORICAL JESUS OF NAZARETH - Amazon.co.uk. "ONCE UPON A TIME... 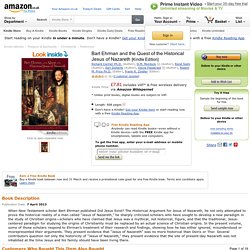 "BART EHRMAN AND THE QUEST OF THE HISTORICAL JESUS OF NAZARETHEdited by Frank R. Zindler and Robert M. PricePublished by American Atheist Press 2013Review by Tim Campbell Once upon a time there was a man named Jesus who lived in Nazareth in Galilee. Or maybe not. I was raised in a religious home (Roman Catholic) and even when I began my journey away from religion (I am now an atheist and do not believe in tribal gods), my inclination was to accept the dogma that there was at least a historical Jesus. However, there has been a wave of predominantly atheist or agnostic scholars who have looked at the Bible and at other sources and have concluded that not only was the magic Jesus the product of imagination, so too was the historical man!

Professor Bart D. Nope. I reviewed that book and found BE's arguments to be compelling, but I did think that his conclusion was simply a bit too certain. Gauntlet laid down; challenge accepted! IF DJE was Round One, B.E. And that's it. Did Jesus Exist?: The Historical Argument for Jesus of Nazareth - amazon.co.uk. "Did Jesus Exist? 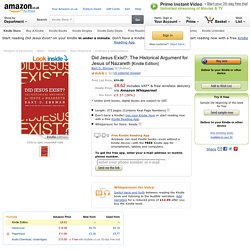 " is a book by Bart Ehrman, a New Testament scholar and out-spoken agnostic-atheist. Despite his private ideological leanings, Ehrman does believe that Jesus was a real historical person, and that the NT contains reliable traditions about him. To simplify somewhat, Ehrman's Jesus is the Jesus of the Gospel of Matthew, but even more Jewish and without the miracles. Thus, Ehrman actually has a rather "conservative" view of Jesus. To psycho-analyze an author you've never met is a risky business, but personally I suspect that Ehrman (a former evangelical Christian) still feels some kind of psychological connection to the Bible in general and the Gospels in particular.

As the title makes obvious, Ehrman's book is a polemic against a group of authors he dubs "mythicists", who claim that Jesus never existed. Personally, I consider Ehrman's book to be a very mixed bag. On other points, I believe Ehrman's arguments are much weaker.