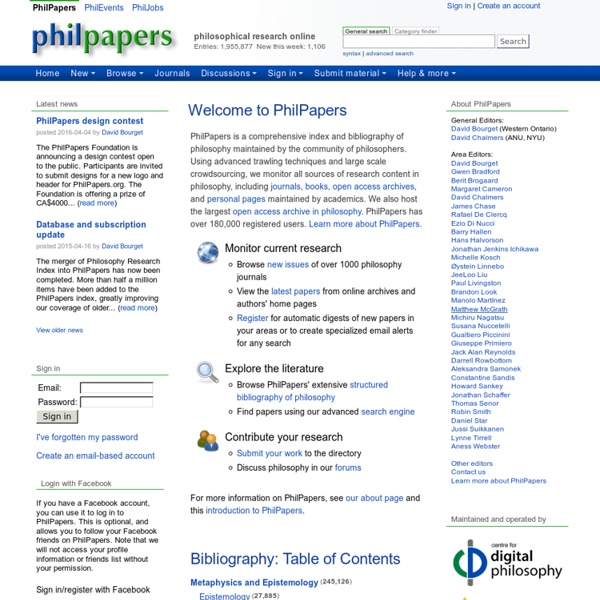 Philosophical Powers: Philosophy Action Figures Philosophical Powers has moved! Update your links to the 'new' URL: files.nyu.edu/iav202/public/powers/powers.html. I had a little extra time on my hands the summer after my first year as a graduate student in Indiana University's prestigious philosophy department, so I decided to take on a project that would blend two of my greatest interests--or rather, one of my petty distractions and my greatest interest, which are philosophy and toys, respectively. I wanted to do something that would bring a discipline that is often seen as difficult, esoteric, and even irrelevant, into new light--especially in the eyes of young people.

Graphing the history of philosophy « Drunks&Lampposts A close up of ancient and medieval philosophy ending at Descartes and Leibniz If you are interested in this data set you might like my latest post where I use it to make book recommendations. This one came about because I was searching for a data set on horror films (don’t ask) and ended up with one describing the links between philosophers. To cut a long story very short I’ve extracted the information in the influenced by section for every philosopher on Wikipedia and used it to construct a network which I’ve then visualised using gephi

Janell Burley Hofmann Download a Copy of the Contract Here Dear Gregory Merry Christmas! You are now the proud owner of an iPhone. Hot Damn! Mashups at GoodBlimey – Home to 2,748 mashups! Here are 2,748 mashups for you to enjoy. A mashup combines one song into another song which can change the meaning or mood of either songs into something entirely unique and fun. Use this collection of mashups at parties and events, or for your own personal pleasure. Learn more about mashups at Wikipedia » As heard on Colin Murray’s “The Black Hole” show on the BBC’s Radio 1.

Intro Gendlin, E.T. (1997). A process model. New York: The Focusing Institute. Recent articles by Gendlin not yet added to the Library Gendlin, E.T. (2013). Glossary of philosophy A glossary of philosophy. A[edit] the position that in a particular domain of thought, all statements in that domain are either absolutely true or absolutely false: none is true for some cultures or eras while false for other cultures or eras. The 37 Best Websites to Learn Something New Forget overpriced schools, long days in a crowded classroom, and pitifully poor results. These websites and apps cover myriads of science, art, and technology topics. They will teach you practically anything, from making hummus to building apps in node.js, most of them for free.

Kurt Vonnegut explains drama I was at a Kurt Vonnegut talk in New York a few years ago. Talking about writing, life, and everything. He explained why people have such a need for drama in their life. He said, “People have been hearing fantastic stories since time began. The problem is, they think life is supposed to be like the stories. Let's look at a few examples.” Filosofía para Niños The US philosopher Mathew Lipman, created Philosophy for Children in 1969, and nowadays more than 50 countries from all continents has applied its program. The goal has nothing to do with trying to convert these children and teenagers into professional philosophers, but instead, its aim is to develop and preserve their critical, creative and caring thinking and attitude. The program is based on:

Process philosophy Process philosophy (or ontology of becoming) identifies metaphysical reality with change and development. Since the time of Plato and Aristotle, philosophers have posited true reality as "timeless", based on permanent substances, while processes are denied or subordinated to timeless substances. If Socrates changes, becoming sick, Socrates is still the same (the substance of Socrates being the same), and change (his sickness) only glides over his substance: change is accidental, whereas the substance is essential. Therefore, classic ontology denies any full reality to change, which is conceived as only accidental and not essential. This classical ontology is what made knowledge and a theory of knowledge possible, as it was thought that a science of something in becoming was an impossible feat to achieve.[1] History[edit]

Cult Films Directors with Cult Status: Ed Wood Oft-maligned Ed Wood has generally been regarded as the worst Hollywood film-maker of all time - and therefore has a number of classic cult films in his filmography. His directorial debut film was titled Glen or Glenda? (1953) (aka I Changed My Sex, I Led Two Lives, The Transvestite, or He or She) - about cross-dressing, with Wood starring as a transvestite struggling with his addiction to angora, and Bela Lugosi as the narrator. Evolutionary Pragmatism A Discourse on a Modern Philosophy For the 21stCentury By Stuart A. Philosophy Mission: Develop thrivable agents and a flourishing network to co-create a more thrivable world. We work with a 5 point model, considering the individual, their environment (at many scales), the social interactions involved, the feedback and metrics to enable adjustment of the course, and the conditions for creativity. Thrivable Elements Creative

25 Things Writers Should Stop Doing I read this cool article last week — “30 Things To Stop Doing To Yourself” — and I thought, hey, heeeey, that’s interesting. Writers might could use their own version of that. So, I started to cobble one together. And, of course, as most of these writing-related posts become, it ended up that for the most part I’m sitting here in the blog yelling at myself first and foremost. That is, then, how you should read this: me, yelling at me. If you take away something from it, though?