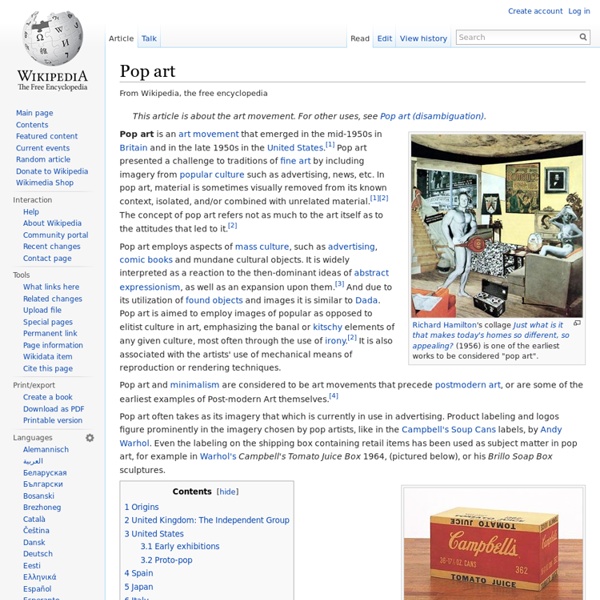 Pop art is an art movement that emerged in the mid-1950s in Britain and in the late 1950s in the United States.[1] Pop art presented a challenge to traditions of fine art by including imagery from popular culture such as advertising, news, etc. In pop art, material is sometimes visually removed from its known context, isolated, and/or combined with unrelated material.[1][2] The concept of pop art refers not as much to the art itself as to the attitudes that led to it.[2] Pop art employs aspects of mass culture, such as advertising, comic books and mundane cultural objects. It is widely interpreted as a reaction to the then-dominant ideas of abstract expressionism, as well as an expansion upon them.[3] And due to its utilization of found objects and images it is similar to Dada. Pop art and minimalism are considered to be art movements that precede postmodern art, or are some of the earliest examples of Post-modern Art themselves.[4] §Origins[edit] Eduardo Paolozzi. §United States[edit]

Andy Warhol Andy Warhol (/ˈwɔrhɒl/;[1] August 6, 1928 – February 22, 1987) was an American artist who was a leading figure in the visual art movement known as pop art. His works explore the relationship between artistic expression, celebrity culture and advertisement that flourished by the 1960s. After a successful career as a commercial illustrator, Warhol became a renowned and sometimes controversial artist. The Andy Warhol Museum in his native city, Pittsburgh, Pennsylvania, holds an extensive permanent collection of art and archives. It is the largest museum in the United States dedicated to a single artist. Warhol's art encompassed many forms of media, including hand drawing, painting, printmaking, photography, silk screening, sculpture, film, and music. Early life (1928–1949) In third grade, Warhol had Sydenham's chorea (also known as St. As a teenager, Warhol graduated from Schenley High School in 1945. 1950s 1960s Campbell's Soup I (1968) Attempted murder (1968) 1970s 1980s

Pierre Restany Pierre Restany (24 June 1930 – 29 May 2003), was an internationally known French art critic and cultural philosopher. Restany was born in Amélie-les-Bains-Palalda, Pyrénées-Orientales, and spent his childhood in Casablanca. On returning to France in 1949 he attended the Lycée Henri-IV before studying at universities in France, Italy and Ireland. From their first meeting in 1955, Restany maintained a strong tie with Yves Klein (to whom is attributed Klein-blue). Conceptions of New Realism / Nouveau Realisme[edit] In 1960 Pierre Restany created the idea and coined the term "Nouveau Réalisme"[1] with Yves Klein during a group show in the Apollinaire gallery in Milan. Pierre Restany died in Paris in 2003 and is buried in the Montparnasse Cemetery. See also[edit] Bibliography[edit] Pierre Restany. References[edit] Sources[edit] External links[edit]

Origin Roy Lichtenstein Roy Fox Lichtenstein (pronounced /ˈlɪktənˌstaɪn/; October 27, 1923 – September 29, 1997) was an American pop artist. During the 1960s, along with Andy Warhol, Jasper Johns, and James Rosenquist among others, he became a leading figure in the new art movement. His work defined the basic premise of pop art through parody.[2] Favoring the comic strip as his main inspiration, Lichtenstein produced hard-edged, precise compositions that documented while it parodied often in a tongue-in-cheek humorous manner. His work was heavily influenced by both popular advertising and the comic book style. He described pop art as "not 'American' painting but actually industrial painting".[3] His paintings were exhibited at the Leo Castelli Gallery in New York City. Whaam! Early years[edit] Career[edit] Cap de Barcelona, sculpture, mixed media, Barcelona Lichtenstein entered the graduate program at Ohio State and was hired as an art instructor, a post he held on and off for the next ten years. Later work[edit]

Raymond Hains Raymond Hains (9 November 1926 - 28 October 2005) was a French artist and photographer. Biography[edit] Hains was born in Dinard. In 1945, he briefly enrolled in the sculpture course at the École des Beaux-Arts, Rennes and met Jacques de la Villeglé that same year. In the 1950s, together with fellow affichiste Jacques de la Villeglé he started using collage and found, torn posters from street advertisements in creating Ultra-Lettrist psychogeographical hypergraphics. For Documenta X, invited by curator Catherine David in 1997 to return to Kassel, Hains exhibited in a Kassel shop rather than at the Fredericianum and organized a street parade that traveled through the city, led by a larger-than-life-size mannequin of the late Iris Clert, Hains's gallerist and a towering figure in the Paris art world of the 1960s. Hains won the Kurt Schwitters prize in 1997. External links[edit] Raymond Hains : " Mon Encyclopédie Clartés website conceived for the Centre Pompidou exhibition in 2001

Artists Jasper Johns Detail of Flag (1954-55). Museum of Modern Art, New York City. This image illustrates Johns' early technique of painting with thick, dripping encaustic over a collage made from found materials such as newspaper. Jasper Johns, Jr. Life[edit] Born in Augusta, Georgia, Jasper Johns spent his early life in Allendale, South Carolina, with his paternal grandparents after his parents' marriage failed. Johns studied a total of three semesters at the University of South Carolina, from 1947 to 1948.[2] He then moved to New York City and studied briefly at the Parsons School of Design in 1949.[2] In 1952 and 1953 he was stationed in Sendai, Japan during the Korean War.[2] In 1954, after returning to New York, Johns met Robert Rauschenberg and they became long-term lovers. Johns currently lives in Sharon, Connecticut and on the Island of Saint Martin.[9] Until 2012, he lived in a rustic 1930s farmhouse with a glass-walled studio in Stony Point, New York. Work[edit] Painting[edit] Sculpture[edit] Notes

Jacques Villeglé Jacques Villeglé Jacques Villeglé, born Jacques Mahé de la Villeglé (27 March 1926, Quimper, Brittany) is a French mixed-media artist and affichiste famous for his alphabet with symbolic letters and decollage with ripped or lacerated posters. He builds posters in which one has been placed over another or others, and the top poster or posters have been ripped, revealing to a greater or lesser degree the poster or posters underneath. He is a member of the Nouveau Réalisme art group (1960–1963). His work has primarily focused on the anonymous and on the marginal remains of civilization. Villeglé first started producing art in 1947 in Saint-Malo by collecting found objects (steel wires, bricks from Saint-Malo's Atlantic retaining wall).

Robert Rauschenberg Robert Rauschenberg (October 22, 1925 – May 12, 2008) was an American painter and graphic artist whose early works anticipated the pop art movement. Rauschenberg is well known for his "Combines" of the 1950s, in which non-traditional materials and objects were employed in innovative combinations. Rauschenberg was both a painter and a sculptor and the Combines are a combination of both, but he also worked with photography, printmaking, papermaking, and performance.[1][2] He was awarded the National Medal of Arts in 1993.[3] He became the recipient of the Leonardo da Vinci World Award of Arts in 1995 in recognition of his more than 40 years of fruitful artmaking.[4] Rauschenberg lived and worked in New York City as well as on Captiva Island, Florida until his death from heart failure on May 12, 2008.[5] Life and career[edit] Rauschenberg was born as Milton Ernest Rauschenberg in Port Arthur, Texas, the son of Dora Carolina (née Matson) and Ernest R. Canyon (1959) Death[edit] Combines[edit]

Neo-Dada Neo-Dada is a minor audio and visual art movement that has similarities in method or intent to earlier Dada artwork. While it revived some of the objectives of dada, it put "emphasis on the importance of the work of art produced rather than on the concept generating the work".[1] It is the foundation of Fluxus, Pop Art and Nouveau réalisme.[2] Neo-Dada is exemplified by its use of modern materials, popular imagery, and absurdist contrast. It also patently denies traditional concepts of aesthetics. The term was popularized by Barbara Rose in the 1960s and refers primarily, although not exclusively, to a group of artwork created in that and the preceding decade. See also[edit] Anti-art [edit] Jump up ^ "neo-dada". References[edit] Susan Hapgood, Neo-Dada: Redefining Art, 1958-62.