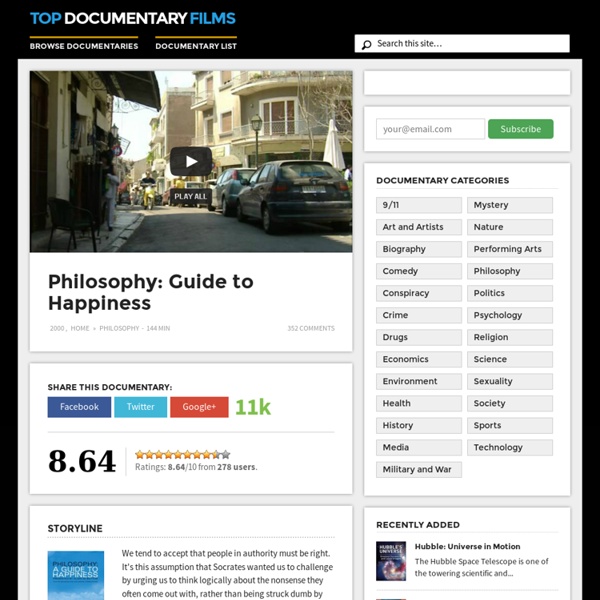 We tend to accept that people in authority must be right. It's this assumption that Socrates wanted us to challenge by urging us to think logically about the nonsense they often come out with, rather than being struck dumb by their aura of importance and air of suave certainty. This six part series on philosophy is presented by popular British philosopher Alain de Botton, featuring six thinkers who have influenced history, and their ideas about the pursuit of the happy life. Socrates on Self-Confidence (Part 1) - Why do so many people go along with the crowd and fail to stand up for what they truly believe? Partly because they are too easily swayed by other people's opinions and partly because they don't know when to have confidence in their own. Seneca on Anger (Part 3) - Roman philosopher Lucious Annaeus Seneca (4BCE-65CE), the most famous and popular philosopher of his day, took the subject of anger seriously enough to dedicate a whole book to the subject.

Cosmos: A Personal Voyage With Cosmos, Carl Sagan and his wife and co-writer, Ann Druyan, brilliantly illustrated the underlying science of his same-titled book, placing the human species within a space-and-time context that brought the infinite into stunningly clear view. The series, which originally aired in 1980 on PBS, has been seen by more than 700 million people worldwide and remains a high-water mark in miniseries history. Sagan lucidly explains such topics as Einstein's theory of relativity, Darwin's theory of evolution, and the greenhouse effect, bringing the mysteries of the universe down to a layman’s level of understanding. The footage in these remastered, seven-DVD or seven-VHS sets is as fresh and riveting as it was two decades ago and is certain to fire the imaginations of a whole new generation of viewers. This is THE GREATEST television series ever.

Introduction to Natural Law - Murray N. Rothbard [This article is excerpted from the first 5 chapters of The Ethics of Liberty. Audiobook versions of these chapters, read by Jeff Riggenbach, are now available for podcast or download.] 1. 208 Nietzsche’s Progeny (1991) - Rick Roderick Download: Nietzsche and the Post-Modern Condition (1991) Lecture 8: Nietzsche’s Progeny Transcript: The last lecture on Nietzsche is quite a challenge since one of Nietzsche’s arguments are there are no “lasts”. There are no last interpretations, there are no last desperate moments, in fact it’s a little remark about history that I might begin this so-called last lecture with.

My First Lie, and How I Got Out of It - Mark Twain Read the collected works of Mark Twain (Samuel Clemens).More E-texts My First Lie, and How I Got Out of It by Mark Twaina.k.a. Samuel Clemens(1835-1910) As I understand it, what you desire is information about 'my first lie, and how I got out of it.' I was born in 1835; I am well along, and my memory is not as good as it was. Heidegger: Thinking the Unthinkable German philosopher Martin Heidegger addressed the central question of human existence full on, by examining how human self-awareness depends on concepts of time and death. His preoccupation with ontology - the form of metaphysical inquiry concerned with the study of existence itself - dominated his work. The central idea of his complex Sein und Zeit (Being and Time) (1927) could be summed up in the phrase 'being is'. Man had to ask himself 'what is it to be?' and only by doing this, and standing back from absorption into objects and other distractions, could he actually exist. For Heidegger, the constant fear of death and the anxieties of life helped man to ask this central question – the mystery of life was intimately linked to the individual's confrontation and consideration of the temporary nature of their own existence.

Taxonomy of the Logical Fallacies How to Use the Taxonomy | Main Menu Acknowledgments: Thanks to David Goodey and Kent Gustavsson for pointing out missing links. The Lost World of Lake Vostok It sometimes seems as if our planet has no secrets left - but deep beneath the great Antarctic ice sheet scientists have made an astonishing discovery. They’ve found one of the largest lakes in the world. It’s very existence defies belief. Scientists are desperate to get into the lake because its extreme environment may be home to unique flora and fauna, never seen before, and NASA are excited by what it could teach us about extraterrestrial life.

What is Stoicism and How Can it Turn your Life to Solid Gold? A few weeks ago, I got a really interesting email from a guy in Norway that said something like, “Hey Mr. MM.. What you are preaching is Pure Stoicism, with a great twist and perception on today’s world … I love it!!” *