Scientists have a plan to make breathable oxygen on Mars for the first time. When it comes to deep-space travel and exploration, oxygen is one of the most important elements in the mix. 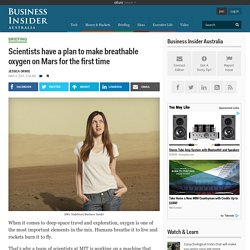 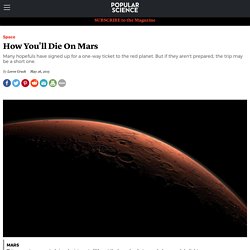 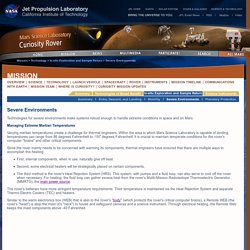 Managing Extreme Martian Temperatures Varying martian temperatures create a challenge for thermal engineers. Scientists are trying to brew oxygen on Mars. The Mars 2020 mission will send a small rover to Mars carrying an instrument that can “brew” oxygen on the Red Planet. 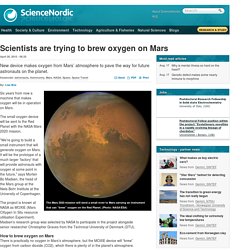 (Photo: NASA/ESA) Six years from now a machine that makes oxygen will be in operation on Mars. The small oxygen device will be sent to the Red Planet with the NASA Mars 2020 mission. "We're going to build a small instrument that will generate oxygen on Mars. It will be the prototype of a much larger 'factory' that will provide astronauts with oxygen at some point in the future," says Morten Bo Madsen, the head of the Mars group at the Niels Bohr Institute at the University of Copenhagen.

Oxygen-Generating Mars Rover to Bring Colonization Closer. NASA's next Mars rover could help humans get a foothold on the Red Planet. 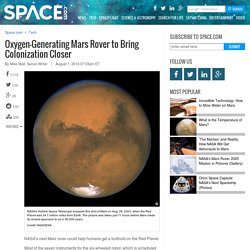 Most of the seven instruments for the six-wheeled robot, which is scheduled to launch toward Mars in 2020, are designed to help scientists identify and sample rocks that may harbor evidence of past Mars life, NASA officials announced Thursday (July 31). What man will REALLY wear on Mars: Nasa reveals 'Tron' spacesuit that will glow so astronauts can be easily spotted. Nasa has confirmed that it plans to send the first astronauts to Mars wearing a radical new 'Tron' spacesuit. 3D printed for each astronaut, the new suit, called Z-2, will allow astronauts to walk on the Martian surface far more easily. 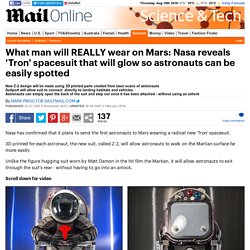 Unlike the figure hugging suit worn by Matt Damon in the hit film the Martian, it will allow astronauts to exit through the suit's rear - without having to go into an airlock. Scroll down for video. NASA Unveils New Mars Spacesuits. NASA is not wasting any time in developing new spacesuits to be used in a variety of locations for the Journey To Mars. 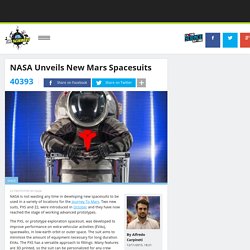 Two new suits, PXS and Z2, were introduced in October and they have now reached the stage of working advanced prototypes. The PXS, or prototype exploration spacesuit, was developed to improve performance on extra-vehicular activities (EVAs), spacewalks, in low-earth orbit or outer space. The suit aims to minimize the amount of equipment necessary for long duration EVAs. The PXS has a versatile approach to fittings. NASA's Futuristic Spacesuits Made for Mars Walkers. NASA is thinking hard about what the first boots to set foot on Mars will look like. 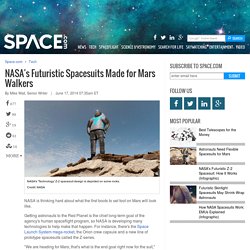 Getting astronauts to the Red Planet is the chief long-term goal of the agency's human spaceflight program, so NASA is developing many technologies to help make that happen. For instance, there's the Space Launch System mega-rocket, the Orion crew capsule and a new line of prototype spacesuits called the Z-series. "We are heading for Mars; that's what is the end goal right now for the suit," said Phil Stampinato of ILC Dover, the Delaware-based company that won NASA contracts to design and build the first two iterations of the Z-series, the Z-1 and Z-2. [NASA's Z-2 Spacesuit in Pictures: Futuristic Astronaut Suit Design Photos] "So, everything that's done to develop this suit is headed for a Mars mission, even if there is an asteroid mission or a lunar mission prior to that," Stampinato said during a presentation with NASA's Future In-Space Operations working group on June 4.

A new type of suit. NASA’s released a prototype of the spacesuit astronauts will wear on Mars. ICYMI, humans are going to Mars in the mid-2030s, and NASA is about to start recruiting astronauts for the mission. 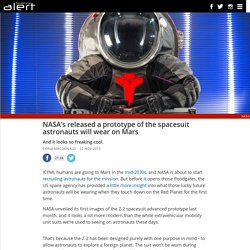 But before it opens those floodgates, the US space agency has provided a little more insight into what those lucky future astronauts will be wearing when they touch down on the Red Planet for the first time. NASA unveiled its first images of the Z-2 spacesuit advanced prototype last month, and it looks a lot more modern than the white extravehicular mobility unit suits we’re used to seeing on astronauts these days.

That’s because the Z-2 has been designed purely with one purpose in mind - to allow astronauts to explore a foreign planet. The suit won’t be worn during space walks or on board spacecraft, but will be used when humans reach Mars. "The suit is designed for maximum astronaut productivity on a planetary surface – exploring, collecting samples, and maneuvering in and out of habitats and rovers," NASA explained. NASA Ponders Mars Farming for 2030s Manned Mission. WASHINGTON —The first humans to live on Mars might not identify as astronauts, but farmers. 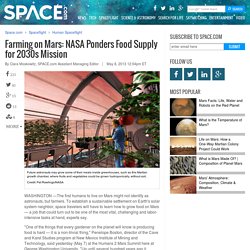 To establish a sustainable settlement on Earth's solar system neighbor, space travelers will have to learn how to grow food on Mars — a job that could turn out to be one of the most vital, challenging and labor-intensive tasks at hand, experts say. "One of the things that every gardener on the planet will know is producing food is hard — it is a non-trivial thing," Penelope Boston, director of the Cave and Karst Studies program at New Mexico Institute of Mining and Technology, said yesterday (May 7) at the Humans 2 Mars Summit here at George Washington University. "Up until several hundred years ago it occupied most of us for most of the time. " Early Mars colonists may have to revert to this mode of life to ensure their own survival, she suggested.

Home. 'The Martian': What Would It Take to Grow Food on Mars? NASA has laid out plans to send people to Mars in the 2030s, but don't expect these Red Planet visitors to landscape the rocky sphere with fresh produce the way astronaut and botanist Mark Watney does in "The Martian. " (Spoiler alert) In the movie, when Watney (played by Matt Damon) gets stranded on Mars, he plants potatoes in a greenhouse using Martian soil and his own "metabolic waste. " And it works: He's able to stay alive for more than a year living largely on potatoes. Though "The Martian," which hit theaters last Friday (Oct. 2), is fairly realistic, growing food on Mars wouldn't play out exactly as described on the big screen.

And it would take hundreds of years before the Red Planet could be farmed without protective greenhouses, according to Paul Sokoloff, a botanist at the Canadian Museum of Nature. [7 Most Mars-Like Places on Earth] Martian agriculture challenges. Plants grown in Martian and Lunar soil by Dutch researchers. Mars could be the next frontier, but what will grow there? (AP Photo/NASA/JPL, File) ESTABLISHING a human colony on the Moon and travelling to Mars has been the stuff of dreams since the dawn of the space age.

But these visions face many hurdles. How can humans survive for months or years in the ultra-hostile environment of space? What, for instance, will they eat? Agricultural researchers at a Dutch university say they are taking the first steps towards providing an answer. They are growing vegetables in soils similar to those found on the Moon and Mars, looking for ways of helping space pioneers grow their own crops. “When people go to the Moon and Mars they also have to eat, and it’s easiest for them to grow their own food,” said Wieger Wamelink, surrounded by several dozen plants in a special greenhouse at Wageningen, an agricultural university in central Netherlands.

“We wanted to use real Martian and lunar soil,” to see if plants would actually grow in it, Wamelink told AFP. Loaded: 0% Can we grow food on Mars? Future human settlers on Mars will need to construct greenhouses in order to grow food on the Red Planet. Image Credit: NASA Asked by Janet Darren. What NASA’s discovery of liquid water on Mars really means—in the words of NASA scientists — Quartz. This week’s announcement by NASA might make it seem like there is liquid water flowing on the surface of Mars right now.

But when the agency’s scientists answered questions from the public via Reddit, they revealed a more nuanced picture. Quartz has edited and condensed a selection of their comments for clarity. Do we really have flowing water on Mars? What quantity of water are we talking about? What it would take to drink the water on Mars. It’s official. NASA scientists have found evidence of present-day liquid water on Mars. But before you start thinking about a second home there, know this: that water isn’t drinkable. It’s chockfull of salts called perchlorates that can be toxic to humans. Several states, including California and Massachusetts, have issued limits on the amount of perchlorates that can be in drinking water, because it can cause thyroid problems and harm the gastrointestinal tract, skin, breast tissue and the placenta.

That’s bad news on Earth, but on Mars, where medical care may be hard to come by, it would be an even bigger problem. Water on Mars: Exploration & Evidence. Will the astronauts have enough water, food and oxygen? - Health and Ethics. Our astronauts will be settling on Mars indefinitely. S Journey to Mars. Blue dots on this map indicate sites of recurring slope lineae (RSL) in part of the Valles Marineris canyon network on Mars. RSL are seasonal dark streaks that may be indicators of liquid water. Mars Science Laboratory - Curiosity. Ten Reasons NOT To Live On Mars - Great Place To Explore. Mars is a fascinating planet, the most like Earth of all the planets in the solar system, and may help us to understand much about the origins of life on Earth. Undoubtedly, it's a wonderful place to explore, especially with augmented reality vision.

Space colonies and the poles of the Moon, are both more easily habitable than Mars, and more easy to make self sufficient. You see so many news stories about the possibility of humans colonizing Mars, and many readers may get really excited by the idea. Note, this article runs to an estimated 33 printed pages. S Journey to Mars. How To Make Water And Oxygen On Mars - Science News. Part of the show Phosphorus, spontaneous human combustion, marsh gas and will-o-the-wisp.