Abandoned New Orleans. A World Without People - In Focus. For a number of reasons, natural and human, people have recently evacuated or otherwise abandoned a number of places around the world -- large and small, old and new. 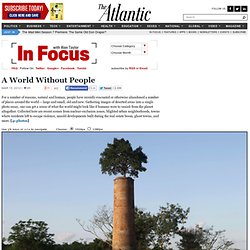 Gathering images of deserted areas into a single photo essay, one can get a sense of what the world might look like if humans were to vanish from the planet altogether. Collected here are recent scenes from nuclear-exclusion zones, blighted urban neighborhoods, towns where residents left to escape violence, unsold developments built during the real estate boom, ghost towns, and more. [41 photos] Use j/k keys or ←/→ to navigate Choose: A tree grows from the top of a chimney in an abandoned factory yard in Luque, on the outskirts of Asuncion, Paraguay, on October 2 , 2011. A World Without People - In Focus. 17 Abandoned Places Around The World That You Probably Didn’t Know About. Abandoned cities — even buildings — capture our imagination. 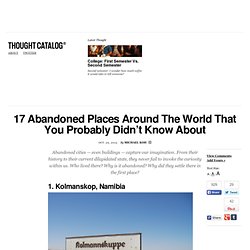 From their history to their current dilapidated state, they never fail to invoke the curiosity within us. Who lived there? The Idiot Photographer. Preserving Oklahoma's Past. North America – Abandoned Playgrounds. Drop out & cop out. Abandoned Buildings in New York City. Hart Island The empty pavilion has a room filled with used shoes and a hall that has tree branches growing inside the building. 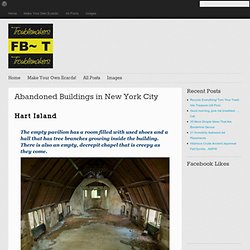 There is also an empty, decrepit chapel that is creepy as they come. Rob Yasinsac's Hudson Valley Ruins Website Updates. Abandoned places and forgotten history from across the five boroughs. AbandonedPorn: Abandoned everything. Abandoned buildings. Last weekend my friend and I took a step into some very trashed ruins of what was once the worlds largest outdoor pool — the Fleishhacker Pool. 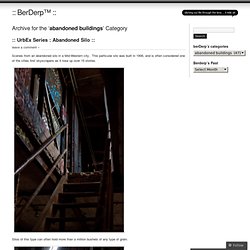 This behemoth opened in 1925, held 6 million gallons and could accommodate 10,000 swimmers. All that is left now is the 450 foot long pool house. The pool was paved over years ago by the SF Zoo. (from TerraStories): The year was 1921 and only a few years earlier, a grand scheme to bring water to the city of San Francisco came to fruition. “Spring Valley Water Company was the quintessential symbol of Pork Barrel Spending in post-Earthquake San Francisco. “To this day, the city depends on the water of Hetch Hetchy, but it came at a cost – the valley was considered only second to Yosemite Valley itself before it was inundated by the waters of the dam.

“the Fleishhacker Pool opened in April of 1925 to a crowd of 5,000. “These wings were naturally illuminated by 22 skylights. Abandoned buildings. The 7 Most Infamous U.S. Public Housing Projects. For decades American government’s efforts to house the poor have relied on the construction of subsidized housing plots more commonly known as “Projects.” 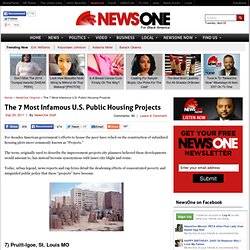 The term, originally used to describe the improvement projects city planners believed these developments would amount to, has instead become synonymous with inner-city blight and crime. Today, urban legend, news reports and rap lyrics detail the deadening effects of concentrated poverty and misguided public policy that these “projects” have become. 7) Pruitt-Igoe, St.

America’s Most Famous And Now Extinct Housing Projects. For decades, poverty has poured through the halls of America’s poorest citizens housed in crime-ridden, severely distressed public housing developments across the nation. 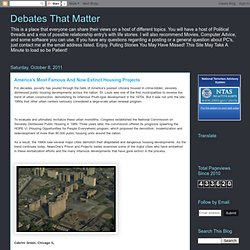 St. Louis was one of the first municipalities to reverse the trend of urban construction, demolishing its infamous Pruitt-Igoe development in the 1970s. But it was not until the late 1980s that other urban centers seriously considered a large-scale urban renewal program. To evaluate and ultimately revitalize these urban monoliths, Congress established the National Commission on Severely Distressed Public Housing in 1989. Three years later, the commission offered its prognosis spawning the HOPE VI (Housing Opportunities for People Everywhere) program, which proposed the demolition, modernization and redevelopment of more than 80,000 public housing units around the nation. As a result, the 1990s saw several major cities demolish their dilapidated and dangerous housing developments. 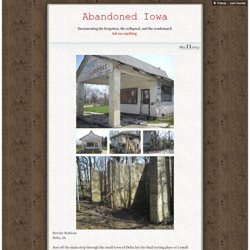 I don't know if you've been to Volga, but I was there this fall and I know that there's a large abandoned theater right in the middle of town along with an abandoned house and bridge, not sure exactly there but if you're in the area it would be cool to check out! Ill keep that in mind next time I’m in eastern Iowa! Admittedly I dont make it out there very often but every so often I am in the Iowa City area. April 12 2013 Location ideas? Home « Abandoned. Man’s Shocking Footprint – Abandoned Towns… There are planes, trains and automobiles as well as homes, airports and mines. And all are eerily quiet. These are some of the world’s strangest places, spots where time appears to have stood still. Inside the abandoned 'ghostscrapers' MCS Book Depository: Designed by Albert Kahn, originally as a Post Office for the city of Detroit, this large, four-story structure later served as storage for the Detroit Public School System Derelict: Abandoned Sattler Theatre in Buffalo, New York, was built in 1914 and used as a church in the years before it became abandoned The 'Belvedere': The eagles at the top of the abandoned Pacific Telephone Building, in San Francisco, which was once the tallest building in the city Lifeless: Vacant and abandoned Lee Plaza Hotel Living Room in Detroit, Michigan. 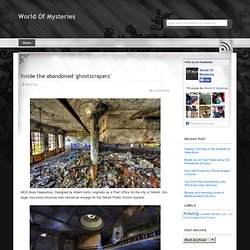 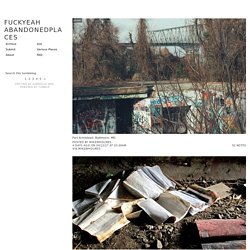 Baltimore, MD. Bibles in the abandoned Rochester subway. June 1938. A Documentation of Suburban Ruins. Dead Inside. Simply put - the exterior of this building is quite beautiful. 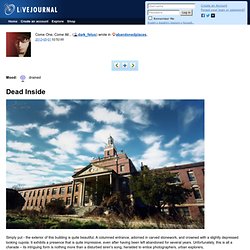 A columned entrance, adorned in carved stonework, and crowned with a slightly depressedlooking cupola. It exhibits a presence that is quite impressive, even after having been left abandoned for several years. Unfortunately, this is all a charade – its intriguing form is nothing more than a disturbed siren's song, heralded to entice photographers, urban explorers, and other curiosity seekers into its toxic maw. Our first visit to this location did not start out unlike many of our other excursions. Way OT-Pictures Of Abandoned School Buildings In Kansas - Yesterday's Tractor Co. (#1289017) One of my hobbies is taking pictures of small Kansas towns under population 500..Quite often there is an empty school building in them...Here are just a few of the 100 or so schools that I have pictures for... Creepy Abandoned Churches (PHOTOS) Matthew Christopher's Abandoned America - An Autopsy of the American Dream. Urban Exploration. Fuck Yeah Abandoned Buildings! Ten of the Creepiest Abandoned Locations.

“It took me years to build up the nerve to go,” he admits. “The immense size of the shipyard is unfathomable—row after row of ships, just waiting their turn to sink into the murky waters. The stench of rotting wood and oil is almost unbearable. It’s not a welcoming place.” Deserted Places. 30 abandoned places that look truly beautiful. 1. Urban Atrophy. Abandoned Chateau du Jour. A house fit for Gatsby, nestled in the South of France, inspired by the palazzos of Italy, the Chateau Bijou is a one of kind find that I’ve been bursting to share with you. Mike Tyson's Deserted 80s Mansion. Between 1985, when he made his professional debut at age 18, to his retirement two decades later, Mike Tyson made up to $400 million, demanding $30 million for a single fight at his peak. He led a high-flying lifestyle, buying mansions, cars and Bengal tigers at the drop of a hat. In 2004, Tyson filed for bankruptcy.

He was $23 million in debt, owing the U.S. and British governments $17 million in taxes, three-quarters of a million dollars to seven law firms and $300,000 for limo services. At Least We Tried. Outlaw-gentleman asked: I'm getting amped up for my first-ever urban exploration. Abandoned Places of America (44 pics. Spooky Abandoned Hospitals and Asylums (PHOTOS) St. John’s Hospital, Lincolnshire, England. Abandoned Meat Packing Plant - Sherry Ott's Photos. Abandoned Buildings Berlin Photo Tours. Expired products still sit in the cafeteria at the abandoned Meat Factory. The glass crunches underneath my shoes with every step I take, the stairway is dimly lit by diffused daylight on this wintery day. A cold blast of air blows through the broken window sending a thin layer of snow swirling on the stairs as I continue to walk to the top level.

The paint on the walls and ceiling is peeled and cracking. 5 Entire Islands with Large Complex Buildings Completely Abandoned. Abandoned. "People buy tickets to theatres, not movies." — Marcus Loew. World Abandoned: Americas. The nuclear plant that was never finished. I recently "discovered" with great surprise this amazing site on google earth, and was equally amazed by its story. The unfinished "Crimean Atomic Energy Station" (Ukrainian КримськаАЕС, Russian КрымскаяАЭС) was supposed to be a new nuclear power plant for the region of Ukraine's Autonomous Republic of Crimea.

World Abandoned: USA. Six Flags New Orleans was the subject of our first ever post here at World Abandoned and the story remains one of the most fascinating. This is the original advert for the park after it reopened in 2003 as a Six Flags. Before that, it was known as Jazzland. Honeycomb - Urban Exploration. Abandoned WWII building Photo Gallery by Michel Fleury at pbase. 8 Abandoned American Theme Parks "Open" for Exploration. Abandoned Theme Parks, Theaters, Schools & Pools. Creepy, Crusty, Crumbling: Illegal Tour of Abandoned Six Flags New Orleans [75 Pics] Hurricane Katrina killed this clown. According to the photographer, “An abandoned Six Flags amusement park, someone spray painted ‘Six Flags 2012 coming soon’ on the wall above the downed head.