Shell intensifies efforts to obtain shale gas exploration rights:Wednesday 22 February 2012. Shell reckons an energy crisis looms in SA(SABC) Oil company Shell says introducing gas as a large contributor to the energy supply in the country could be a game changer. 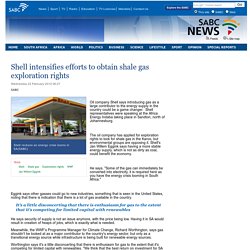 Shell representatives were speaking at the Africa Energy Indaba taking place in Sandton, north of Johannesburg. The oil company has applied for exploration rights to look for shale gas in the Karoo, but environmental groups are opposing it. Shell's Jan Willem Eggink says having a more stable energy supply, which is not as dirty as coal, could benefit the economy. He says, "Some of the gas can immediately be converted into electricity, it is required here as you have the energy crisis looming in South Africa. " Eggink says other gasses could go to new industries, something that is seen in the United States, noting that there is indication that there is a lot of gas available in the country. Karoo fracking decision expected soon :Friday 11 May 2012. Minerals Minister Susan Shabangu. 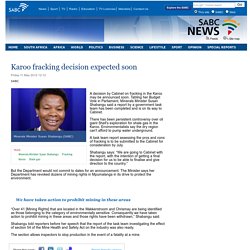 (SABC) A decision by Cabinet on fracking in the Karoo may be announced soon. Tabling her Budget Vote in Parliament, Minerals Minister Susan Shabangu said a report by a government task team has been completed and is on its way to Cabinet. There has been persistent controversy over oil giant Shell's exploration for shale gas in the Karoo. Environmentalists say the dry region can't afford to pump water underground. A task team report assessing the pros and cons of fracking is to be submitted to the Cabinet for consideration by July. Shabangu says: “We are going to Cabinet with the report, with the intention of getting a final decision for us to be able to finalise and give direction to the country.”

But the Department would not commit to dates for an announcement. We have taken action to prohibit mining in these areas. Minister Peters hopeful for Cabinet decision on fracking:Thursday 17 May 2012. Minister Dipuo Peters. 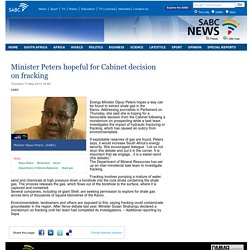 (SABC) Energy Minister Dipuo Peters hopes a way can be found to extract shale gas in the Karoo. Addressing journalists in Parliament on Thursday, she said she is hoping for a favourable decision from the Cabinet following a moratorium on prospecting while a task team investigates the impact of hydraulic fracturing or fracking, which has caused an outcry from environmentalists. If exploitable reserves of gas are found, Peters says, it would increase South Africa's energy security. She encouraged dialogue. The Department of Mineral Resources has set up an inter-ministerial task team to investigate fracking. E Cape to research socio-economic impact of shale gas:Tuesday 11 March 2014. Does fracking threaten South Africa’s water resources? :Friday 30 May 2014. Shale gas mining is a process that applies the technique of high-volume, horizontal, slick-water fracturing (‘fracking’ or ‘hydraulic fracturing’). 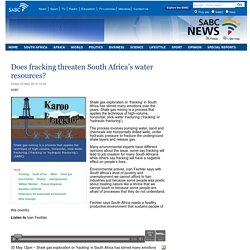 (SABC) Shale gas exploration or ‘fracking’ in South Africa has stirred many emotions over the years. Shale gas mining is a process that applies the technique of high-volume, horizontal, slick-water fracturing (‘fracking’ or ‘hydraulic fracturing’). The process involves pumping water, sand and chemicals into horizontally drilled wells, under hydraulic pressure to fracture the underground shale layers and release gas. Many environmental experts have different opinions about the issue, some say fracking will lead to job creation for many South Africans while others say fracking will have a negative effect on people’s lives. Fechter says South Africa needs a healthy productive environment that sustains people of this country. 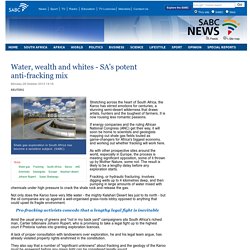 (SABC) Stretching across the heart of South Africa, the Karoo has stirred emotions for centuries, a stunning semi-desert wilderness that draws artists, hunters and the toughest of farmers. It is now rousing less romantic passions. If energy companies and the ruling African National Congress (ANC) get their way, it will soon be home to scientists and geologists mapping out shale gas fields touted as game-changers for Africa's biggest economy, and working out whether fracking will work here. As with other prospective sites around the world, especially in Europe, the process is meeting significant opposition, some of it thrown up by Mother Nature, some not. Fracking, or hydraulic fracturing, involves digging wells up to 4 kilometres deep, and then pumping in large amounts of water mixed with chemicals under high pressure to crack the shale rock and release the gas.

"We do need electricity. "We will get the licence. Fracking a game changer for the Karoo: Zuma:Friday 29 November 2013. Fracking is the process of fracturing rock by pumping pressurised liquid deep into the ground to extract natural gas trapped in shale layers. 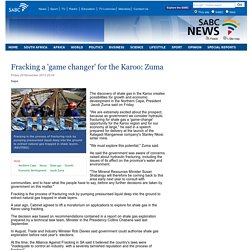 (REUTERS) The discovery of shale gas in the Karoo creates possibilities for growth and economic development in the Northern Cape, President Jacob Zuma said on Friday. "We are extremely excited about the prospect, because as government we consider hydraulic fracturing for shale gas a 'game-change' opportunity for the Karoo region and for our economy at large," he said in a speech prepared for delivery at the launch of the Kalagadi Manganese company's Stanley Nkosi sinter mine. "We must explore this potential," Zuma said. He said the government was aware of concerns raised about hydraulic fracturing, including the issues of its affect on the province's water and environment. Government to publish regulations for shale gas exploration:Thursday 7 May 2015. Shale gas exploration identified as one of the "game changers" in the energy generation sector. 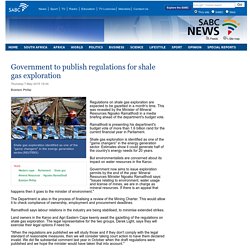