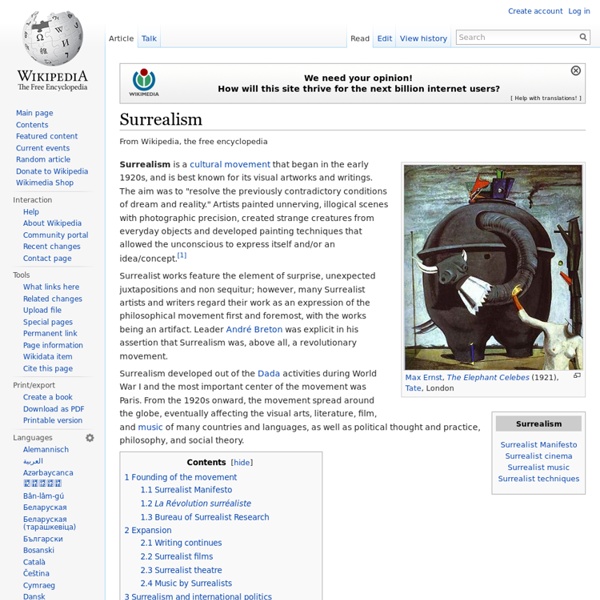 Surrealism is a cultural movement that began in the early 1920s, and is best known for its visual artworks and writings. The aim was to "resolve the previously contradictory conditions of dream and reality." Artists painted unnerving, illogical scenes with photographic precision, created strange creatures from everyday objects and developed painting techniques that allowed the unconscious to express itself and/or an idea/concept.[1] Surrealist works feature the element of surprise, unexpected juxtapositions and non sequitur; however, many Surrealist artists and writers regard their work as an expression of the philosophical movement first and foremost, with the works being an artifact. Surrealism developed out of the Dada activities during World War I and the most important center of the movement was Paris. Founding of the movement[edit] The group aimed to revolutionize human experience, in its personal, cultural, social, and political aspects. Surrealist Manifesto[edit] Expansion[edit] Related:  Thesis - Exploration of Value

Expressionism Expressionism was a modernist movement, initially in poetry and painting, originating in Germany at the beginning of the 20th century. Its typical trait is to present the world solely from a subjective perspective, distorting it radically for emotional effect in order to evoke moods or ideas.[1][2] Expressionist artists sought to express meaning[3] or emotional experience rather than physical reality.[3][4] Origin of the term[edit] In 1905, a group of four German artists, led by Ernst Ludwig Kirchner, formed Die Brücke (the Bridge) in the city of Dresden. This was arguably the founding organization for the German Expressionist movement, though they did not use the word itself. "View of Toledo" by El Greco, 1595/1610 has been indicated to have a particularly striking resemblance to 20th-century expressionism. Expressionist-Visual artists[edit] Franz Marc, Die großen blauen Pferde (The Large Blue Horses), (1911) Some of the style's main visual artists of the early 20th century were:

André Breton - Wikipedia, the free encyclopedia André Breton (French: [ɑ̃dʁe bʁətɔ̃]; 19 February 1896 – 28 September 1966) was a French writer and poet. He is known best as the founder of Surrealism. His writings include the first Surrealist Manifesto (Manifeste du surréalisme) of 1924, in which he defined surrealism as "pure psychic automatism". Biography[edit] Born to a family of modest means in Tinchebray (Orne) in Normandy, he studied medicine and psychiatry. Breton married his first wife, Simone Kahn, on 15 September 1921. From Dada to Surrealism[edit] In 1919 Breton initiated the review Littérature with Louis Aragon and Philippe Soupault. In a publication The Magnetic Fields (Les Champs Magnétiques), a collaboration with Soupault, he implemented the principle of automatic writing. Anxious to combine the themes of personal transformation found in the works of Arthur Rimbaud with the politics of Karl Marx, Breton joined the French Communist Party in 1927, from which he was expelled in 1933. 1940s[edit] Later life[edit] Works[edit]

Cultural movement A cultural movement is a change in the way a number of different disciplines approach their work. This embodies all art forms, the sciences, and philosophies. Historically, different nations or regions of the world have gone through their own independent sequence of movements in culture, but as world communications have accelerated this geographical distinction has become less distinct. When cultural movements go through revolutions from one to the next, genres tend to get attacked and mixed up, and often new genres are generated and old ones fade. These changes are often reactions against the prior cultural form, which typically has grown stale and repetitive. There is continual argument over the precise definition of each of these periods, and one historian might group them differently, or choose different names or descriptions. This current article covers western, notably European and American cultural movements. Cultural movements[edit] See: Romanesque architecture — Ottonian Art

Stewart Brand Stewart Brand (born December 14, 1938) is an American writer, best known as editor of the Whole Earth Catalog. He founded a number of organizations, including The WELL, the Global Business Network, and the Long Now Foundation. He is the author of several books, most recently Whole Earth Discipline: An Ecopragmatist Manifesto. Life[edit] Brand attended Phillips Exeter Academy, before studying biology at Stanford University, from which he graduated in 1960. American Indians[edit] Through scholarship and by visiting numerous Indian reservations, he familiarized himself with the Native Americans of the West. Merry Pranksters[edit] By the mid-1960s, he was associated with author Ken Kesey and the "Merry Pranksters", and in San Francisco, with his partner Zach Stewart, Brand produced the Trips Festival, an early effort involving rock music and light shows. NASA images of Earth[edit] Earth from space, by ATS-3 satellite, 1967 Douglas Engelbart[edit] Whole Earth Catalog[edit] The WELL[edit]

Surrealist music - Wikipedia, the free encyclopedia Surrealist music is music which uses unexpected juxtapositions and other surrealist techniques. Discussing Theodor Adorno, Max Paddison (1993, 90) defines surrealist music as that which "juxtaposes its historically devalued fragments in a montage-like manner which enables them to yield up new meanings within a new aesthetic unity," though Lloyd Whitesell says this is Paddison's gloss of the term (Whitesell 2004, 118). Anne LeBaron (2002, 27) cites automatism, including improvisation, and collage as the primary techniques of musical surrealism. According to Whitesell, Paddison quotes Adorno's 1930 essay "Reaktion und Fortschritt" as saying "Insofar as surrealist composing makes use of devalued means, it uses these as devalued means, and wins its form from the 'scandal' produced when the dead suddenly spring up among the living" (Whitesell 2004, 107 and 118n18). Early surrealist music[edit] Sources[edit] Adorno, Theodor W. 2002.

Minimalism (visual arts) Jean Metzinger, following the Succès de scandale created from the Cubist showing at the 1911 Salon des Indépendants, in an interview with Cyril Berger published in Paris-Journal 29 May 1911, stated: We cubists have only done our duty by creating a new rhythm for the benefit of humanity. Others will come after us who will do the same. What will they find? That is the tremendous secret of the future. Metzinger's (then) audacious prediction that artists would take abstraction to its logical conclusion by vacating representational subject matter entirely and returning to what Metzinger calls the "primordial white unity", a "completely white canvas" would be realized two years later. Monochrome painting was initiated at the first Incoherent arts' exhibition in 1882 in Paris, with a black painting by poet Paul Bilhaud entitled "Combat de Nègres dans un tunnel" (Negroes fight in a tunnel).

Modernism Hans Hofmann, "The Gate", 1959–1960, collection: Solomon R. Guggenheim Museum. Hofmann was renowned not only as an artist but also as a teacher of art, and a modernist theorist both in his native Germany and later in the U.S. During the 1930s in New York and California he introduced Modernism and modernist theories to a new generation of American artists. Modernism is a philosophical movement that, along with cultural trends and changes, arose from wide-scale and far-reaching transformations in Western society in the late 19th and early 20th centuries. History[edit] Beginnings: the 19th century[edit] According to one critic, modernism developed out of Romanticism's revolt against the effects of the Industrial Revolution and bourgeois values: "The ground motive of modernism, Graff asserts, was criticism of the nineteenth-century bourgeois social order and its world view […] the modernists, carrying the torch of romanticism".[5][6][7] While J. However, the Industrial Revolution continued.

Pop art Pop art is an art movement that emerged in the mid-1950s in Britain and in the late 1950s in the United States.[1] Pop art presented a challenge to traditions of fine art by including imagery from popular culture such as advertising, news, etc. In pop art, material is sometimes visually removed from its known context, isolated, and/or combined with unrelated material.[1][2] The concept of pop art refers not as much to the art itself as to the attitudes that led to it.[2] Pop art employs aspects of mass culture, such as advertising, comic books and mundane cultural objects. It is widely interpreted as a reaction to the then-dominant ideas of abstract expressionism, as well as an expansion upon them.[3] And due to its utilization of found objects and images it is similar to Dada. Pop art and minimalism are considered to be art movements that precede postmodern art, or are some of the earliest examples of Post-modern Art themselves.[4] §Origins[edit] Eduardo Paolozzi. §United States[edit]

Postmodern art Postmodern art is a body of art movements that sought to contradict some aspects of modernism or some aspects that emerged or developed in its aftermath. In general, movements such as Intermedia, Installation art, Conceptual Art and Multimedia, particularly involving video are described as postmodern. There are several characteristics which lend art to being postmodern; these include bricolage, the use of words prominently as the central artistic element, collage, simplification, appropriation, performance art, the recycling of past styles and themes in a modern-day context, as well as the break-up of the barrier between fine and high arts and low art and popular culture.[1][2] Use of the term[edit] The predominant term for art produced since the 1950s is "contemporary art". As well as describing certain tendencies of contemporary art, postmodern has also been used to denote a phase of modern art. As with all uses of the term postmodern there are critics of its application. Dada[edit]