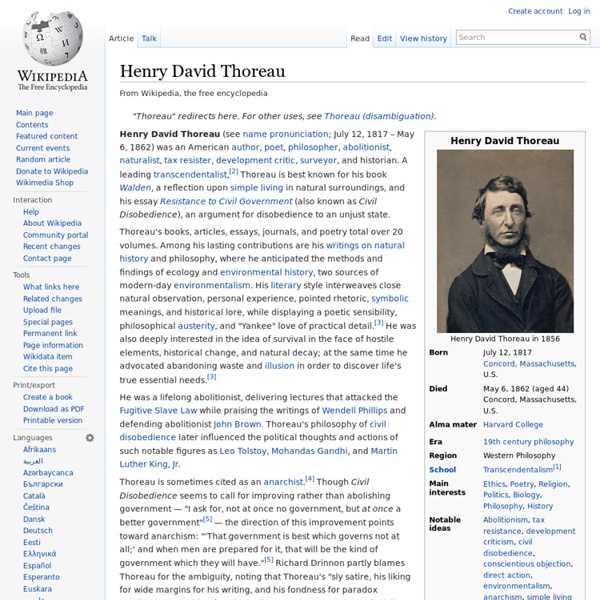 Henry David Thoreau (see name pronunciation; July 12, 1817 – May 6, 1862) was an American author, poet, philosopher, abolitionist, naturalist, tax resister, development critic, surveyor, and historian. A leading transcendentalist,[2] Thoreau is best known for his book Walden, a reflection upon simple living in natural surroundings, and his essay Resistance to Civil Government (also known as Civil Disobedience), an argument for disobedience to an unjust state. Thoreau's books, articles, essays, journals, and poetry total over 20 volumes. Among his lasting contributions are his writings on natural history and philosophy, where he anticipated the methods and findings of ecology and environmental history, two sources of modern-day environmentalism. Name pronunciation and physical appearance[edit] In appearance he was homely, with a nose that he called "my most prominent feature Life[edit] Early life and education, 1817–1836[edit] Return to Concord, 1836–1842[edit] Later years, 1851–1862[edit] Related:  gehan • Political Philosophy • .caisson

Jean-Jacques Rousseau Jean-Jacques Rousseau (/ruːˈsoʊ/;[1] French: [ʒɑ̃ʒak ʁuso]; 28 June 1712 – 2 July 1778) was a Genevan philosopher, writer, and composer of the 18th century. His political philosophy influenced the French Revolution as well as the overall development of modern political, sociological, and educational thought. Biography[edit] Youth[edit] Rousseau was born in Geneva, which was at the time a city-state and a Protestant associate of the Swiss Confederacy. Rousseau was proud that his family, of the moyen order (or middle-class), had voting rights in the city. Geneva, in theory, was governed democratically by its male voting "citizens". There was much political debate within Geneva, extending down to the tradespeople. The house where Rousseau was born at number 40, Grand-Rue. The trade of watchmaking had become a family tradition by the time of Rousseau's father, Isaac Rousseau. He and his older brother François were brought up by their father and a paternal aunt, also named Suzanne.

Real freedom Real freedom is a term coined by the political philosopher and economist Philippe Van Parijs. It expands upon notions of negative freedom by incorporating not simply institutional or other constraints on a person's choices, but also the requirements of physical reality, resources and personal capacity. To have real freedom, according to Van Parjis, an individual must: 1. not be prevented from acting on their will (i.e. they must have traditional negative freedom); and 2. possess the resources or capacities actually to carry out their will. Under this conception, a moral agent could be negatively free to take a holiday in Miami, because no-one is forcing them not to (condition 1 is met); but not really free to do so, because they cannot afford the flight (condition 2 is not met). Van Parijs uses the concept of real freedom as part of his influential argument for a universal basic income.[1] See also[edit] References[edit] Jump up ^ Van Parijs, Philippe (1997). Further reading[edit]

The Writings of Henry D. Thoreau By Elizabeth Witherell, with Elizabeth Dubrulle When I wrote the following pages, or rather the bulk of them, I lived alone, in the woods, a mile from any neighbor, in a house which I had built myself, on the shore of Walden Pond, in Concord, Massachusetts, and earned my living by the labor of my hands only. I lived there two years and two months. (Walden, 3) With these words, Henry David Thoreau began the tale of his experiment of simple living at Walden Pond. In the years following Thoreau's death in 1862, his sister and his friends undertook the responsibility of editing his work. In late March 1845 Thoreau went to Walden Pond, a sixty-two acre body of water a few miles from his parents' home in Concord, Massachusetts, and selected a spot to build a house. I went to the woods because I wished to live deliberately, to front only the essential facts of life, and see if I could not learn what it had to teach, and not, when I came to die, discover that I had not lived.

Social contract In moral and political philosophy, the social contract or political contract is a theory or model, originating during the Age of Enlightenment, that typically addresses the questions of the origin of society and the legitimacy of the authority of the state over the individual.[1] Social contract arguments typically posit that individuals have consented, either explicitly or tacitly, to surrender some of their freedoms and submit to the authority of the ruler or magistrate (or to the decision of a majority), in exchange for protection of their remaining rights. The question of the relation between natural and legal rights, therefore, is often an aspect of social contract theory. The Social Contract (Du contrat social ou Principes du droit politique) is also the title of a 1762 book by Jean-Jacques Rousseau on this topic. Overview[edit] Thomas Hobbes famously said that in a "state of nature" human life would be "solitary, poor, nasty, brutish, and short". History[edit] 31.

The Soul of Man under Socialism First edition "The Soul of Man under Socialism" is an 1891 essay by Oscar Wilde in which he expounds a libertarian socialist (social anarchist) worldview.[1] The creation of "The Soul of Man" followed Wilde's conversion to anarchist philosophy, following his reading of the works of Peter Kropotkin.[2] In The Soul of Man Wilde argues that, under capitalism, "the majority of people spoil their lives by an unhealthy and exaggerated altruism—are forced, indeed, so to spoil them": instead of realising their true talents, they waste their time solving the social problems caused by capitalism, without taking their common cause away. Thus, caring people "seriously and very sentimentally set themselves to the task of remedying the evils that they see in poverty but their remedies do not cure the disease: they merely prolong it" because, as Wilde puts it, "the proper aim is to try and reconstruct society on such a basis that poverty will be impossible." Overview[edit] See also[edit] Notes[edit]

‘Walden’ for the 21st century Can a man who once refused the gift of a doormat — because, as he wrote, “It’s best to avoid the beginnings of evil” — continue to inspire people in how to live simply? The answer is yes, but with stipulations, said scholar Lawrence Buell at a Harvard lecture last week (March 25). Buell, Powell M. Buell referenced examples of literature on voluntary simplicity from the past, including Thoreau contemporary Lydia Maria Child, whose 1829 book “The American Frugal Housewife” promoted “frugal efficiency as moral imperative.” The scholar also included examples of current authors who promote the simple life, including Duane Elgin and his work “Voluntary Simplicity,” and Colin Beavan, a New York City author who recounted his efforts to limit drastically his environmental impact in the book “No Impact Man: The Adventures of a Guilty Liberal Who Attempts to Save the Planet, and the Discoveries He Makes About Himself and Our Way of Life in the Process.” Next in the series is “What’s Enough?

Simple living Poverty is general scarcity or dearth, or the state of one who lacks a certain amount of material possessions or money.[1] Absolute poverty or destitution refers to the deprivation of basic human needs, which commonly includes food, water, sanitation, clothing, shelter, health care and education. Relative poverty is defined contextually as economic inequality in the location or society in which people live.[2][3] After the industrial revolution, mass production in factories made production goods increasingly less expensive and more accessible. Of more importance is the modernization of agriculture, such as fertilizers, to provide enough yield to feed the population.[4] The supply of basic needs can be restricted by constraints on government services such as corruption, tax avoidance, debt and loan conditionalities and by the brain drain of health care and educational professionals. Etymology The English word "poverty" via Anglo-Norman povert. Measuring poverty Definitions Absolute poverty

Mutual Aid: A Factor of Evolution Written partly in response to Social Darwinism and in particular to Thomas H. Huxley's Nineteenth Century essay, "The Struggle for Existence", Kropotkin's book drew on his experiences in scientific expeditions in Siberia to illustrate the phenomenon of cooperation. After examining the evidence of cooperation in nonhuman animals, in pre-feudal societies and medieval cities, and in modern times, he concluded that cooperation and mutual aid are the most important factors in the evolution of species and the ability to survive. Discussion[edit] Daniel P. Kropotkin pointed out the distinction between the direct struggle among individuals for limited resources (generally called competition) and the more metaphorical struggle between organisms and the environment (tending to be cooperative). Editions[edit] See also[edit] References[edit] External links[edit]

Maslow's hierarchy of needs Maslow's hierarchy of needs, represented as a pyramid with the more basic needs at the bottom[1] Maslow's hierarchy of needs is a theory in psychology proposed by Abraham Maslow in his 1943 paper "A Theory of Human Motivation" in Psychological Review.[2] Maslow subsequently extended the idea to include his observations of humans' innate curiosity. His theories parallel many other theories of human developmental psychology, some of which focus on describing the stages of growth in humans. Maslow used the terms "physiological", "safety", "belongingness" and "love", "esteem", "self-actualization", and "self-transcendence" to describe the pattern that human motivations generally move through. Maslow's theory was fully expressed in his 1954 book Motivation and Personality.[5] The hierarchy remains a very popular framework in sociology research, management training[6] and secondary and higher psychology instruction. Hierarchy Physiological needs Safety needs Safety and Security needs include:

William Morris William Morris self-portrait, 1856 William Morris (24 March 1834 – 3 October 1896) was an English artist, writer, textile designer and socialist associated with the Pre-Raphaelite Brotherhood and English Arts and Crafts Movement.[1][2] He founded a design firm in partnership with the artist Edward Burne-Jones, and the poet and artist Dante Gabriel Rossetti which profoundly influenced the decoration of churches and houses into the early 20th century. As an author, illustrator and medievalist, he helped to establish the modern fantasy genre, and was a direct influence on postwar authors such as J. R. R. Life[edit] Early life and education[edit] William Morris was born in Walthamstow on 24 March 1834, the third child and the eldest son of William Morris, a partner in the firm of Sanderson & Co., bill brokers in the City of London. Morris's painting La belle Iseult, also inaccurately called Queen Guinevere, is his only surviving easel painting, now in the Tate Gallery. Red House[edit]

Communitarianism Communitarianism is a philosophy that emphasizes the connection between the individual and the community. While the "community" may be a family unit, it is usually understood in the wider sense of interactions between a community of people in a geographical location, or who have a shared history or interest.[1] Communitarian philosophy is derived from the assumption that individuality is a product of community relationships rather than only individual traits. Terminology[edit] Though communitarianism as a philosophy originated in the 20th-century, the term “communitarian” was coined in 1841 by John Goodwyn Barmby, a leader of the British Chartist movement, who used it to refer to utopian socialists and others who experimented with unusual communal lifestyles. However, it was not until the 1980s that the term gained currency through its association with the work of a small group of mostly American political philosophers. The term is primarily used in two senses: Origins[edit]