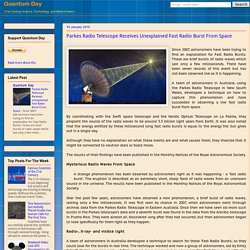 These are brief bursts of radio waves which last only a few milliseconds. There have been seven records of this event but has not been observed live as it is happening. Next-Generation Transit Survey (NGTS) To Hunt and Study Exoplanets. The Next-Generation Transit Survey (NGTS), a wide-field observing system by the European Southern Observatory (ESO) was launched and has achieved first light. 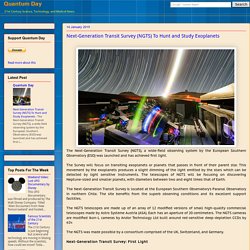 The Survey will focus on transiting exoplanets or planets that passes in front of their parent star. Fruit Flies Raised in Outer Space Have Weak Immune System. An experiment that involved Drosophila fruit flies being raised in outer space at the Space Shuttle Discovery showed that the flies have a weaker immune system compared to regular Drosophila flies raised on Earth. 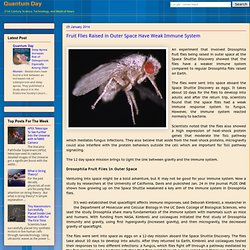 The flies were sent into space aboard the Space Shuttle Discovery as eggs. It takes about 10 days for the flies to develop into adults and after the return trip, scientists found that the space flies had a weak immune response system to fungus. However, the immune system reacted normally to bacteria. Scientists noted that the flies also showed a high expression of heat-shock protein genes that moderate the Toll pathway which mediates fungus infections. They also believe that aside from the heat-shock proteins, microgravity could also interfere with the protein behaviors outside the cell which are important for Toll pathway signalling.

Presence of Atmosphere and Water on Saturn Moon Titan Provides Deeper Understanding on Evolution of Life on Earth. At a symposium presented by the American Chemical Society, "Chemical Frontiers in Solar System Exploration", scientists have gathered to discuss the possibility and the circumstances that could lead to the evolution of life in one of the moons of Saturn, Titan. 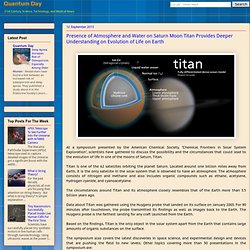 Titan is one of the 62 satellites orbiting the planet Saturn. Located around one billion miles away from Earth, it is the only satellite in the solar system that is observed to have an atmosphere. The atmosphere consists of nitrogen and methane and also includes organic compounds such as ethane, acetylene, hydrogen cyanide, and cyanoacetylene. Study On Effects of Deep Space Travel Reveals Sodium Rhythm Cycle of the Human Body. Researchers simulating humans living in a closed habitat while on deep space travel found that the human body balances its sodium levels in a cycle that is independent on the actual salt intake. 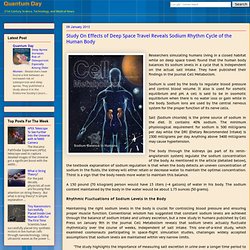 They have published their findings in the journal Cell Metabolism. Sodium is used by the body to regulate blood pressure and control blood volume. It also is used for osmotic equilibrium and pH. A cell is said to be in osomotic equilibrium when there is no water loss or gain while in the body. Study Finds Sleep Patterns And Neurobehavioral Effects As A Concern On Manned Mission To Mars. Researchers analyzing data on the the sleep, performance, and mood behavioral impact of deep space travel to astronauts find that sleep patterns and neurobehavioral effects on the crew members must be addressed for successful adaption to prolonged space missions. 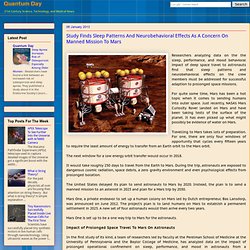 For quite some time, Mars has been a hot topic when it comes to sending humans into outer space. Just recently, NASA's Mars Curiosity Rover landed on Mars and have been taking tests of the surface of the planet. It has even picked up what might possibly be evidence of water on Mars. Travelling to Mars takes lots of preparation. For one, there are only four windows of opportunity that cycles every fifteen years to require the least amount of energy to transfer from an Earth orbit to the Mars orbit.

The next window for a low energy orbit transfer would occur in 2018. Space Food 101 - Spirulina. Ever wonder what astronauts eat when they’re hovering thousands of miles above the Earth? 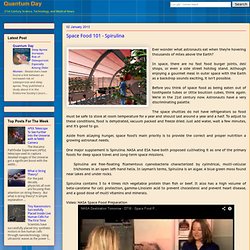 In space, there are no fast food burger joints, deli shops, or even a side street hotdog stand. Although enjoying a gourmet meal in outer space with the Earth as a backdrop sounds exciting, it isn’t possible. Before you think of space food as being eaten out of toothpaste tubes or little bouillon cubes, think again. We’re in the 21st century now. Astronauts have a very discriminating palette. The space shuttles do not have refrigerators so food must be safe to store at room temperature for a year and should last around a year and a half. Aside from allaying hunger, space food’s main priority is to provide the correct and proper nutrition a growing astronaut needs.

One major supplement is Spirulina. Spirulina are free-floating filamentous cyanobacteria characterized by cylindrical, multi-cellular trichomes in an open left-hand helix. Deep Space Travel Can Be Harmful To The Brain Due To Cosmic Radiation. Study shows that exposure to galactic cosmic radiation from deep space travel can cause harmful biological processes and changes to the brain such as cognitive impairments and Alzheimer's disease. 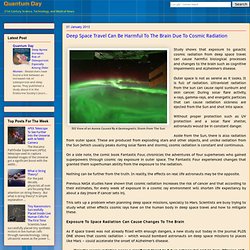 Outer space is not as serene as it looks. It is full of radiation. Ultraviolet radiation from the sun can cause rapid sunburn and skin cancer. During solar flare activity, x-rays, gamma-rays, and energetic particles that can cause radiation sickness are ejected from the Sun and shot into space. Without proper protection such as UV protection and a solar flare shelter, astronauts would be in constant danger.