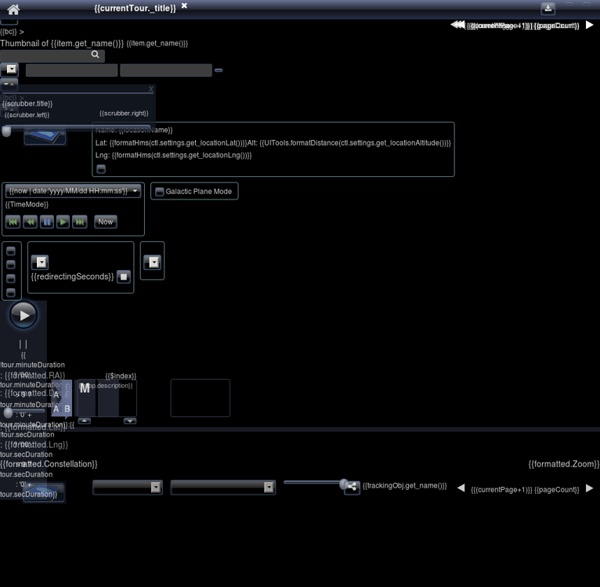 Geometry of the Universe Can the Universe be finite in size? If so, what is ``outside'' the Universe? The answer to both these questions involves a discussion of the intrinsic geometry of the Universe. News - Ribbon Hero 2 You've tried games that test your card playing, your imaginary farming skills, and your ability to hurl small birds. Finally there's a game that will make you better at your job. Do you feel like you're using Word, Excel, PowerPoint, and OneNote the same way version after version, or have you avoided using one of these apps because you don't know how? And you know there's so much more Office could be doing for you if only you knew how to access it?

Secret Worlds: The Universe Within - Interactive Java Tutorial Secret Worlds: The Universe Within View the Milky Way at 10 million light years from the Earth. Then move through space towards the Earth in successive orders of magnitude until you reach a tall oak tree just outside the buildings of the National High Magnetic Field Laboratory in Tallahassee, Florida. After that, begin to move from the actual size of a leaf into a microscopic world that reveals leaf cell walls, the cell nucleus, chromatin, DNA and finally, into the subatomic universe of electrons and protons. Once the tutorial has completely downloaded, a set of the arrows will appear that allow the user to increase or decrease the view magnitude in Manual mode. Click on the Auto button to return to the Automatic mode.

VISTA gigapixel mosaic of the central parts of the Milky Way Want to add this gigapan to your favorites? or now. now to add this Gigapan to a group gallery. now to add this Gigapan to a gallery. About This Gigapan The Absurdity of Infinity: Astrophysicist Janna Levin Explains Whether the Universe Is Infinite or Finite in Letters to Her Mother – Brain Pickings By Maria Popova In 1998, while on the cusp of becoming one of the most significant theoretical cosmologists of our time, mathematician-turned-astrophysicist Janna Levin left her post at Berkeley and moved across the Atlantic for a prestigious position at Cambridge University. During the year and a half there, she had the time and space to contemplate the question that would eventually become the epicenter of her career — whether the universe is infinite or finite. What began as a series of letters to her mother, Sandy, eventually became an unusual diary of Levin’s “social exile as a roaming scientist,” and was finally published as How the Universe Got Its Spots: Diary of a Finite Time in a Finite Space (public library) — a most unusual and absorbing account of the paradoxes of finitude. In an entry from September 3, 1998, Levin fleshes out her ideas on infinity and writes with exquisite Saganesque sensitivity to the poetics of science:

Kodu Kodu is a new visual programming language made specifically for creating games. It is designed to be accessible for children and enjoyable for anyone. The programming environment runs on the Xbox, allowing rapid design iteration using only a game controller for input. Physics Flash Animations We have been increasingly using Flash animations for illustrating Physics content. This page provides access to those animations which may be of general interest. The animations will appear in a separate window. The animations are sorted by category, and the file size of each animation is included in the listing. Also included is the minimum version of the Flash player that is required; the player is available free from The categories are: In addition, I have prepared a small tutorial in using Flash to do Physics animations.

Back-to-back flybys: Asteroids buzz Earth - Technology & science - Space - Space.com Two small asteroids zipped close by Earth in back-to-back flybys of the planet Monday and Tuesday. While both space rocks came well within the moon's orbit, they posed no danger to our planet, NASA scientists say. The newfound asteroid 2012 KP24 zoomed by Earth Monday, coming within 32,000 miles (51,000 kilometers) on its closest approach, according to astronomers at NASA's Asteroid Watch at the agency's Jet Propulsion Laboratory in Pasadena, Calif. "We'll have a close but very safe pass of asteroid 2012 KP24 May 28," scientists with NASA's Asteroid Watch program assured via Twitter. Asteroid Watch is part of the Near-Earth Object Office at NASA's Jet Propulsion Laboratory in Pasadena, Calif.

Xpedition Hall Interactive Archive: Xpedition Hall Welcome to the Interactive “Museum” That Takes You on Geography Journeys See other versions of this page: About Xpedition Hall Xpedition Hall is an archived interactive from the National Geographic Xpeditions website. Transit Agencies We’ve been following the trend of transit agencies providing developer access to timetables, routes and more for some time. Big cities, like New York and Boston are on board and helping fuel new transit applications. There now seems to be more momentum, with organizations and influencers making the call for open data. StreetFilms talked to some of these people, several within transit companies themselves, and created A Case for Open Data (embedded below). One particular case study shows just how fast developers started in on projects when Boston made its data available. “If you take the model of the national weather service and apply it to the transit agencies you realize you can have just as many ways to get transit information as you do to get weather information.