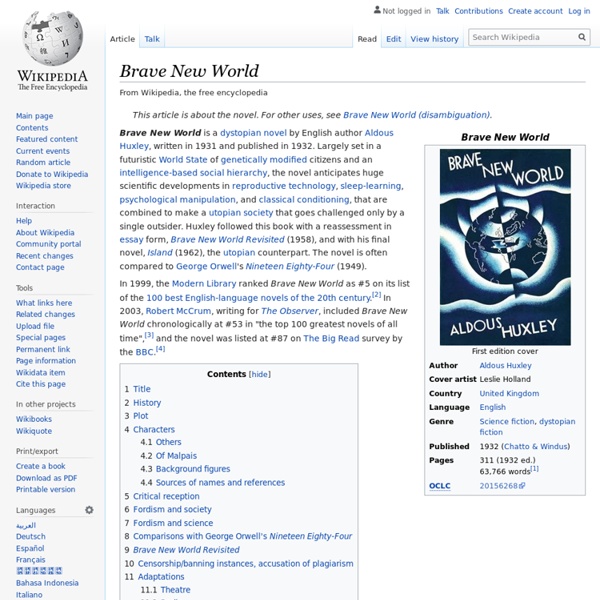 Classic 1932 science fiction novel by Aldous Huxley In 1999, the Modern Library ranked Brave New World as #5 on its list of the 100 best English-language novels of the 20th century.[2] In 2003, Robert McCrum, writing for The Observer, included Brave New World chronologically at #53 in "the top 100 greatest novels of all time",[3] and the novel was listed at #87 on The Big Read survey by the BBC.[4] Title[edit] O wonder! Translations of the title often allude to similar expressions used in domestic works of literature: the French edition of the work is entitled Le Meilleur des mondes (The Best of All Worlds), an allusion to an expression used by the philosopher Gottfried Leibniz[7] and satirised in Candide, Ou l'Optimisme by Voltaire (1759). History[edit] Huxley said that Brave New World was inspired by the utopian novels of H. Plot[edit] Characters[edit] Bernard Marx, a sleep-learning specialist at the Central London Hatchery and Conditioning Centre. Benito Hoover, Another of Lenina's lovers. Related:  Books Chronology

Super Mario Crossover Point Taken (Who needs a fast & 24 hours internet?) H. G. Wells bibliography H. G. Wells was a prolific writer of both fiction and non-fiction. His writing career spanned more than sixty years, and his early science fiction novels earned him the title (along with Jules Verne and Hugo Gernsback) of "The Father of Science Fiction".[1] Novels[edit] Wells's works were reprinted in American science fiction magazines as late as the 1950s Non-fiction[edit] Stories[edit] Note: The stories are listed in alphabetical order of title within each year, and not in order of their publication during the year. Story collections[edit] Film stories[edit] Published versions of film scripts and scenarios written by Wells: The King Who Was a King: The Book of a Film (1929 – scenario for a film which was never made)Things to Come (1935 – adaptation of The Shape of Things to Come and The Work, Wealth and Happiness of Mankind)The Man Who Could Work Miracles (1936)The New Faust (in Nash's Pall Magazine, December 1936 – unmade adaptation of "The Story of the Late Mr. Articles[edit]

Pixar Engineers Leave to Build Real World Living Toys Teddy Ruxpin, meet Siri. Imagine a children's toy designed by the people behind the Toy Story and Finding Nemo movies but connected to the web and chock full of artificial intelligence. Then add in visual tracking, speech recognition and massive network scalability. The company is putting together a powerful team of technologists and creatives from Pixar and SRI (makers of Siri) and is being relatively open about what it's up to. ToyTalk CEO Oren Jacob, photo by Chuck Foxen. Neilsen announced new numbers yesterday, showing that tablet computers are increasingly being used by children. 70% of US households with both tablets and children under 12 now report that their children use the family tablet computer, up 9% over Q3 of last year. Imagine the youngest of children using Web-connected toys carrying character-driven chatterbot artificial intelligence programs. The Brains ToyTalk CEO Oren Jacob worked at Pixar for 20 years, where he served as Chief Technology Officer. Got that?

40 Beautiful 8-Bit Artworks 8 Bit Art can refer to a style of synthesized electronic music called “chiptunes”, as well as a form of digital art called “pixel art”. Both chiptunes and Pixel Art can be more than 8-bits. Chiptunes, also referred to as “chip music”, are often made using sound hardware from old video game consoles or computer systems. The Pixel Art Style is more than often associated with 1980s – early 1990s video game art. Low resolution 8-bit art has recently started to come back on the radar when a site called Eightbit.me came out. If you grow up playing video games, you have witnessed the massive evolution in graphic. Today we present to you a commemorated collection of the wonderful world of 8-bit art. Note: All of the images are linked to their original source. Street 8-bit Art Kiss Did Somebody Call A Plumber? Shoryuken! Nobody Suspects The Shy Guy The 8-bit Tie Grumble, grumble The 8-bit Simpsons Tron Legacy 8-bit BMW

The New America: The New World The New America: The New World is a collection of four articles by H.G. Wells written to examine the American scene, which Wells summed up in 1935 as "the spectacle of a great material civilization, halted, paralyzed. Synopsis[edit] "Man is to-day a challenged animal," Wells wrote in the first article. Resistance to solutions of these problems, Wells believed, were due principally to individuals' abiding tendency to be stubbornly attached to their own way of living, their own traditions.[4] Wells detected this resistance as dominating both reactionary movements like fascism in Germany and revolutionary movements like Communism in the Soviet Union. Wells was concerned at extent to which he observed what he called "the Raucous Voices" to be at the center of discussion of social problems in the United States.[5] Among these he numbered Huey Long, Father Coughlin, and Francis Townsend. Background[edit] In the spring of 1934 Wells had conceived the idea of visiting both President Franklin D.

The Chicken and the Pig The Chickens and the Pig The fable of The Chicken and the Pig is about commitment to a project or cause. When producing a dish made of ham and eggs, the pig provides the ham which requires his sacrifice and the chicken provides the eggs which are not difficult to produce. Thus the pig is really committed in that dish while the chicken is only involved, yet both are needed to produce the dish. Content[edit] The fable of the Chicken and the Pig is used to illustrate the differing levels of project stakeholders involved in a project. A Pig and a Chicken are walking down the road. The Chicken says: "Hey Pig, I was thinking we should open a restaurant!" Pig replies: "Hm, maybe, what would we call it?" The Chicken responds: "How about 'ham-n-eggs'?" The Pig thinks for a moment and says: "No thanks. Sometimes, the story is presented as a riddle:[citation needed] Question: In a bacon-and-egg breakfast, what's the difference between the Chicken and the Pig? Interpretation and lessons[edit] Sports[edit]

The New World Order (Wells) Jump up ^ Partington, John S. Building Cosmopolis: The Political Thought of H.G. Wells. Online Version (Public Domain) Columns / Harsh Mander : Barefoot - The other side of life LIFE-CHANGING EXPERIENCE: Matt (left) and Tushar. Photo courtesy: RS100ADAY.COM Can anyone really live on Rs. 26 a day, the income of the officially poor in rural India? Two youngsters try it out. Late last year, two young men decided to live a month of their lives on the income of an average poor Indian. One of them, Tushar, the son of a police officer in Haryana, studied at the University of Pennsylvania and worked for three years as an investment banker in the US and Singapore. The idea suddenly struck them one day. To begin with, what was the average income of an Indian? The young men moved into the tiny apartment of their domestic help, much to her bemusement. Living on Rs.100 made the circle of their life much smaller. However, the bigger challenge remained. For this, they decided to go to Matt's ancestral village Karucachal in Kerala, and live on Rs. 26. It disturbs us to spend money on most of the things that we now consider excesses.

Level 10 Comics | Full-on Masala Comics Dracula 1897, Boards the Demeter bound for England. 1897 Gothic horror novel by Irish author Bram Stoker Dracula is an 1897 Gothic horror novel by Irish author Bram Stoker. It introduced the character of Count Dracula and established many conventions of subsequent vampire fantasy.[1] The novel tells the story of Dracula's attempt to move from Transylvania to England so that he may find new blood and spread the undead curse, and of the battle between Dracula and a small group of people led by Professor Abraham Van Helsing. Dracula has been assigned to many literary genres including vampire literature, horror fiction, gothic fiction, and invasion literature. Plot Stoker's handwritten notes on the characters in the novel The story is told in an epistolary format, as a series of letters, diary entries, newspaper articles, and ships' log entries, whose narrators are the novel's protagonists, and occasionally supplemented with newspaper clippings relating events not directly witnessed. Soon Dracula is indirectly shown to be stalking Lucy. Dracul