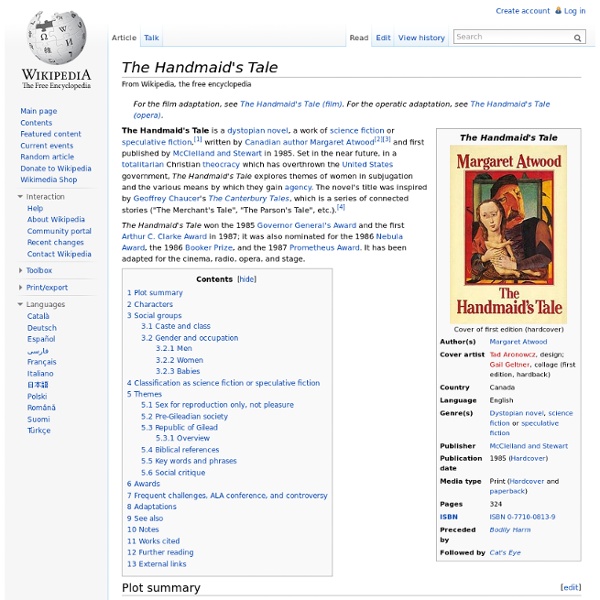 The Handmaid's Tale won the 1985 Governor General's Award and the first Arthur C. Clarke Award in 1987; it was also nominated for the 1986 Nebula Award, the 1986 Booker Prize, and the 1987 Prometheus Award. It has been adapted for the cinema, radio, opera, and stage. Plot summary[edit] The Handmaid's Tale is set in the near future in the Republic of Gilead, a theocratic military dictatorship formed within the borders of what was formerly the United States of America. Beginning with a staged terrorist attack (blamed on Islamic extremist terrorists) that kills the President and most of Congress, a movement calling itself the "Sons of Jacob" launches a revolution and suspends the United States Constitution under the pretext of restoring order. The story is presented from the point of view of a woman called Offred (literally Of-Fred). The Commander is a high-ranking official in Gilead. After Offred's initial meeting with Nick, they begin to rendezvous more frequently. Characters[edit]

Margaret Atwood interview: 'Go three days without water and you don't have any human rights. Why? Because you're dead' | Books | The Observer It's 25 years since the publication of The Handmaid's Tale, her dystopic masterpiece, but Margaret Atwood firmly resists the suggestion that she might be an icon of Canadian literature. "What does that mean?" she counters in her distinctive prairie monotone, somewhere between a drone and a drawl. Now no one has ever dared suggest that Margaret Atwood, a famously scary and prodigiously gifted Canadian intellectual with nearly 50 books to her name – poetry, fiction, critical essays, books for children, radio and film scripts, anthologies and collections of short stories – would ever willingly make an idiot of herself in public. It turns out Mercer is an entertainer who performed this national service when he insisted that the author of The Edible Woman, Alias Grace and The Blind Assassin (which won the Booker Prize in 2000) should get kitted up as an ice-hockey goalie for television in an item entitled "How to Stop a Puck". Mercer was right. Atwood has just turned 71.

The Handmaid s Tale (etext) A chair, a table, a lamp. Above, on the white ceiling, a relief ornament in the shape of a wreath, and in the center of it a blank space, plastered over, like the place in a face where the eye has been taken out. There must have been a chandelier, once. A window, two white curtains. On the wall above the chair, a picture, framed but with no glass: a print of flowers, blue irises, watercolor. Think of it as being in the army, said Aunt Lydia. A bed. So. But a chair, sunlight, flowers: these are not to be dismissed. The bell that measures time is ringing. I get up out of the chair, advance my feet into the sunlight, in their red shoes, flat-heeled to save the spine and not for dancing. The door of the room-not my room, I refuse to say my-is not locked. The carpet bends and goes down the front staircase and I go with it, one hand on the banister, once a tree, turned in another century, rubbed to a warm gloss. There remains a mirror, on the hall wall. Nobody asking you, Cora said.

Brave New World by Aldous Huxley (etext) Chapter One A SQUAT grey building of only thirty-four stories. Over the main entrance the words, CENTRAL LONDON HATCHERY AND CONDITIONING CENTRE, and, in a shield, the World State's motto, COMMUNITY, IDENTITY, STABILITY. The enormous room on the ground floor faced towards the north. "And this," said the Director opening the door, "is the Fertilizing Room." Bent over their instruments, three hundred Fertilizers were plunged, as the Director of Hatcheries and Conditioning entered the room, in the scarcely breathing silence, the absent-minded, soliloquizing hum or whistle, of absorbed concentration. "Just to give you a general idea," he would explain to them. "To-morrow," he would add, smiling at them with a slightly menacing geniality, "you'll be settling down to serious work. Meanwhile, it was a privilege. Tall and rather thin but upright, the Director advanced into the room. "Bokanovsky's Process," repeated the Director, and the students underlined the words in their little notebooks. Mr.

Shakespeare's Sonnets The Road The Road is a 2006 novel by American writer Cormac McCarthy. It is a post-apocalyptic tale of a journey of a father and his young son over a period of several months, across a landscape blasted by an unspecified cataclysm that has destroyed most of civilization and, in the intervening years, almost all life on Earth. The novel was awarded the 2007 Pulitzer Prize for Fiction and the James Tait Black Memorial Prize for Fiction in 2006. Plot summary[edit] An unnamed father and his young son journey across a grim post-apocalyptic landscape, some years after an unspecified apocalypse has destroyed civilization and most life on Earth. Realizing they cannot survive the oncoming winter where they are, the father takes the boy south, along empty roads towards the sea, carrying their meager possessions in their knapsacks and in a supermarket cart. In the face of these obstacles, the man repeatedly reassures the boy that they are "the good guys" who are "carrying the fire". Film adaptation[edit]

Overview (wiki) The utopia and its offshoot, the dystopia, are genres of literature that explore social and political structures. Utopian fiction is the creation of an ideal society, or utopia, as the setting for a novel. Dystopian fiction (sometimes referred to as apocalyptic literature) is the opposite: creation of an utterly horrible or degraded society that is generally headed to an irreversible oblivion, or dystopia.[1] Many novels combine both, often as a metaphor for the different directions humanity can take in its choices, ending up with one of two possible futures. Both utopias and dystopias are commonly found in science fiction and other speculative fiction genres, and arguably are by definition a type of speculative fiction. More than 400 utopian works were published prior to the year 1900 in the English language alone, with more than a thousand others during the twentieth century.[2] Subgenres[edit] Utopian fiction[edit] Dystopian fiction[edit] Combinations[edit] Ecotopian fiction[edit]

‘Still Ticking’: The story behind Stanley Kubrick’s ban on ‘A Clockwork Orange’ After its release in 1971, Stanley Kubrick’s film version of A Clockwork Orange was linked to a series of violent crimes. The first was the murder of a tramp by a 16-year-old youth; the second involved another 16-year-old youth who, dressed in the film’s distinctive gang uniform, stabbed a younger boy; the third was the brutal and horrific gang rape of a Dutch girl by a group of youths from Lancashire, as they sang “Singin’ in the Rain”. Sentencing the 16-year-old for assaulting a child, a judge described the attack part of a “horrible trend” prompted by “this wretched film”. Following death threats and warnings from the police over revenge attacks, Kubrick asked Warner Brothers to pull the film from its UK release. But banning the film didn’t have the desired effect, for when the film was eventually released in the UK on DVD, it led to another spate of copycat crimes, the most notorious of which, was the murder of a bar manager by a “Clockwork Orange gang”.

Dystopian Fiction; A Brief History Dystopian fiction has been around for a long time; interesting enough, it was an offshoot of utopian fiction which started growing in popularity in the 1900’s. I’m a little surprised that utopian fiction seemed to be the predominate genre but if you look at the history of dystopian literature you can see why. The spikes in popularity seems to have started from the lead up to the world war two and the cold war and then as a result of 9/11 and the war on terror. Escapist fiction; as a way to substitute the problems with the world with a more nightmarish world. I thought it might be nice to have a quick look at the genre over time and highlight some essential reads (which stick out to me) for people that haven’t experienced all the joys of this genre. While there were dystopian novels before my first choice, I thought I would start with the one book that may be called the first purely dystopian novel. We by Yevgeny Zamyatin (1921) Brave New World by Aldous Huxley (1932) Like this: