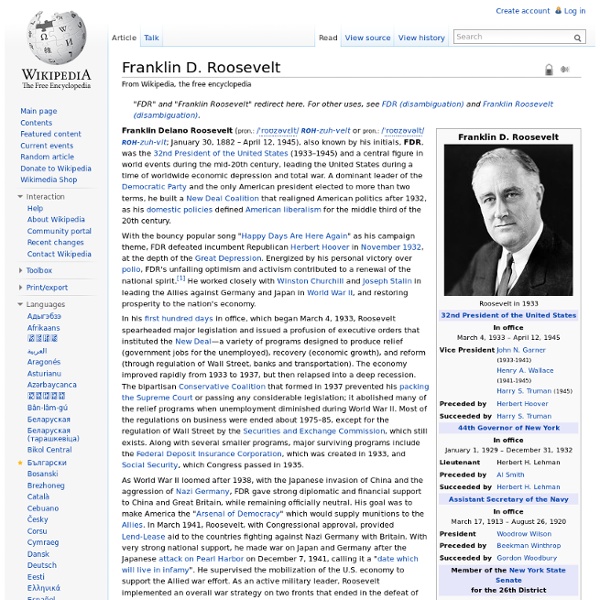 Franklin Delano Roosevelt (/ˈroʊzəvəlt/ ROH-zə-vəlt, his own pronunciation,[1] or /ˈroʊzəvɛlt/ ROH-zə-velt) (January 30, 1882 – April 12, 1945), commonly known by his initials FDR, was an American lawyer and statesman who served as the 32nd President of the United States. Serving from March 1933 to his death in April 1945, he was elected for four consecutive terms, and remains the only president ever to serve more than eight years. He was a central figure in world events during the mid-20th century, leading the United States during a time of worldwide economic depression and total war. With the bouncy popular song "Happy Days Are Here Again" as his campaign theme, FDR defeated incumbent Republican Herbert Hoover in November 1932, at the depth of the Great Depression. As World War II loomed after 1938, with the Japanese invasion of China and the aggression of Nazi Germany, FDR gave strong diplomatic and financial support to China and Great Britain, while remaining officially neutral.

Franklin D. Roosevelt Assuming the Presidency at the depth of the Great Depression, Franklin D. Roosevelt helped the American people regain faith in themselves. He brought hope as he promised prompt, vigorous action, and asserted in his Inaugural Address, "the only thing we have to fear is fear itself." Born in 1882 at Hyde Park, New York--now a national historic site--he attended Harvard University and Columbia Law School. On St. Patrick's Day, 1905, he married Eleanor Roosevelt. Following the example of his fifth cousin, President Theodore Roosevelt, whom he greatly admired, Franklin D. In the summer of 1921, when he was 39, disaster hit-he was stricken with poliomyelitis. He was elected President in November 1932, to the first of four terms. By 1935 the Nation had achieved some measure of recovery, but businessmen and bankers were turning more and more against Roosevelt's New Deal program. In 1936 he was re-elected by a top-heavy margin. Learn more about Franklin D.

Harry S. Truman Harry S. Truman (May 8, 1884 – December 26, 1972) was the 33rd President of the United States of America (1945–1953). The final running mate of President Franklin D. Roosevelt in 1944, Truman succeeded to the presidency on April 12, 1945, when Roosevelt died after months of declining health. Under Truman, the U.S. successfully concluded World War II; in the aftermath of the conflict, tensions with the Soviet Union increased, marking the start of the Cold War. Truman was born in Missouri, and spent most of his youth on his family's farm. While Germany surrendered a few weeks after Truman assumed the Presidency, the war with Japan was expected to last another year or more. On domestic issues, bills endorsed by Truman often faced opposition from a conservative Congress dominated by the South, but his administration successfully guided the American economy through post-war economic challenges. Early life and career Harry S. John Truman was a farmer and livestock dealer. World War I Politics

Schwerin Schwerin ([ʃvəˈʁiːn], lat. Suerinum) is the capital and second-largest city of the northern German state of Mecklenburg-Vorpommern. The population is 91,264 (as of Dec 31, 2012). History[edit] Schwerin is surrounded by many picturesque lakes. In 1358, Schwerin became a part of the Duchy of Mecklenburg, making it the seat of the dukedom from then on. In the mid-1800s, many residents from Schwerin moved to the United States, many to Milwaukee, Wisconsin. After 1918, and during the German Revolution, resulting in the fall of all the German monarchies, the Grand Duke abdicated. At the end of World War II, on 2 May 1945, Schwerin was taken by U.S. troops. After reunification in 1990, the former state of Mecklenburg-Vorpommern was recreated as one of the Bundesländer. Transport[edit] City buses and trams are run by NVS (Nahverkehr Schwerin).[3] Schwerin Hauptbahnhof (central station) is connected by rail to Berlin, Hamburg and Rostock. Main sights[edit] Museums[edit] Gallery[edit] [edit]

Herbert Hoover Herbert Clark Hoover (August 10, 1874 – October 20, 1964) was the 31st President of the United States (1929–1933). Hoover, born to a Quaker family, was a professional mining engineer. He achieved American and international prominence in humanitarian relief efforts in war-time Belgium and served as head of the U.S. Hoover, a globally experienced engineer, believed strongly in the Efficiency Movement, which held that the government and the economy were riddled with inefficiency and waste, and could be improved by experts who could identify the problems and solve them. Family background and early life[edit] 1877 Hoover Tintype Herbert Hoover was born on August 10, 1874, in West Branch, Iowa, the first of his office born in that state and west of the Mississippi River. Hoover birthplace cottage, West Branch, Iowa After a brief stay with one of his grandmothers in Kingsley, Iowa, Hoover lived the next 18 months with his uncle Allen Hoover in West Branch. Mining engineer[edit] Australia[edit]

Fokker Fokker was a Dutch aircraft manufacturer named after its founder, Anthony Fokker. The company operated under several different names, starting out in 1912 in Schwerin, Germany, moving to the Netherlands in 1919. During its most successful period in the 1920s and 1930s, it dominated the civil aviation market. Fokker went into bankruptcy in 1996, and its operations were sold to competitors. History[edit] Fokker's first airplane, the Spin (Spider) (1910) Fokker in Germany[edit] At age 20, Anthony Fokker, while studying in Germany built his initial aircraft, the Spin (Spider)—the first Dutch-built plane to fly in his home country. World War I[edit] Fokker capitalized on having sold several Fokker Spin monoplanes to the German government and set up a factory in Germany to supply the German army. During World War I, Fokker engineers were working on the Fokker-Leimberger, an externally powered 12-barrel Gatling gun in the 7.92x57mm round capable of firing over 7200RPM.[4] Fokker F.VII Aerospace[edit]

Franklin D. Roosevelt | hallofgovernors.ny.gov Roosevelt, Franklin D(elano) (b Hyde Park, Dutchess Co, 30 Jan 1882; d Warm Springs, Ga, 12 Apr 1945). Governor and US president. Raised on his family’s estate at Hyde Park, Roosevelt’s parents were James, a gentleman farmer, and Sara Delano, a dominating figure who closely supervised her only child. His boyhood was spent in privileged surroundings. In 1910 Roosevelt ran as the Democratic Party’s nominee for the state senate in the 26th District (which included parts of Putnam, Dutchess, and Columbia Cos). Roosevelt easily won reelection in 1912 but resigned his seat shortly afterward to become assistant secretary of the US Navy; he remained at the post for seven years and distinguished himself as an advocate of naval rearmament. In 1920 Roosevelt was selected as the vice presidential running mate to Democratic presidential nominee James Cox. Throughout fall 1928 Roosevelt campaigned actively, laying to rest doubts about his physical ability to handle the governorship. Freidel, Frank.

Dwight D. Eisenhower Eisenhower was of Pennsylvania Dutch ancestry and was raised in a large family in Kansas by parents with a strong religious background. He attended and graduated from West Point and later married and had two sons. After World War II, Eisenhower served as Army Chief of Staff under President Harry S. Truman then assumed the post of President at Columbia University.[3] Among his enduring innovations, he launched the Interstate Highway System; the Defense Advanced Research Projects Agency (DARPA), which led to the internet, among many invaluable outputs; the National Aeronautics and Space Administration (NASA), driving peaceful discovery in space; the establishment of strong science education via the National Defense Education Act; and encouraging peaceful use of nuclear power via amendments to the Atomic Energy Act.[5] Early life and education David owned a general store in Hope, Kansas, but the business failed due to economic conditions and the family became impoverished. Personal life

North American Aviation North American Aviation was a major American aerospace manufacturer, responsible for a number of historic aircraft, including the T-6 Texan trainer, the P-51 Mustang fighter, the B-25 Mitchell bomber, the F-86 Sabre jet fighter, the X-15 rocket plane, and the XB-70, as well as Apollo Command and Service Module, the second stage of the Saturn V rocket, the Space Shuttle orbiter and the B-1 Lancer. Through a series of mergers and sales, North American Aviation became part of Rockwell International and is now part of Boeing. History[edit] Early years[edit] Clement Melville Keys founded North American on December 6, 1928, as a holding company that bought and sold interests in various airlines and aviation-related companies. However, the Air Mail Act of 1934 forced the breakup of such holding companies. General Motors Corporation took a controlling interest in NAA and merged it with its General Aviation division in 1933, but retaining the name North American Aviation. World War II[edit]

FDR summary John F. Kennedy John Fitzgerald Kennedy (May 29, 1917 – November 22, 1963), commonly known as "Jack" or by his initials JFK, was an American politician who served as the 35th President of the United States from January 1961 until he was assassinated in November 1963. Kennedy was assassinated in Dallas, Texas on November 22, 1963. Lee Harvey Oswald was accused of the crime and arrested that evening. Jack Ruby shot and killed Oswald two days later, before a trial could take place. Since the 1960s, information concerning Kennedy's private life has come to light. Early life and education John Fitzgerald Kennedy was born at 83 Beals Street in Brookline, Massachusetts, on May 29, 1917, to businessman/politician Joseph Patrick "Joe" Kennedy, Sr. (1888–1969) and philanthropist/socialite Rose Elizabeth Fitzgerald (1890–1995). Jack's brothers were Joseph Patrick "Joe" Kennedy, Jr. (1915–1944), Robert Francis "Bobby" Kennedy (1925–1968), and Edward Moore "Ted" Kennedy (1932–2009). Military service (1941–45)

Kiribati Kiribati ([kɪribas] KIRR-i-bas[4] or ˌkɪrəˈbɑdi;[5] Gilbertese: [ˈkiɾibas]), officially the Independent and Sovereign Republic of Kiribati[19], is an island nation in the central tropical Pacific Ocean. The permanent population is just over 100,000 (2011) on 800 square kilometres (310 sq mi).[6] The nation is composed of 32 atolls and one raised coral island, Banaba, dispersed over 3.5 million square kilometres, (1,351,000 square miles) straddling the equator, and bordering the International Date Line at its easternmost point. Etymology[edit] History[edit] American marines assault a Japanese bunker during the Battle of Tarawa, November 1943. Early history[edit] The area now called Kiribati has been inhabited by Micronesians speaking the same Oceanic language since sometime between 3000 BC[11] and AD 1300.[12] The area was not isolated; invaders from Tonga, Samoa, and Fiji later introduced Polynesian and Melanesian cultural aspects, respectively. Colonial era[edit] Politics[edit]