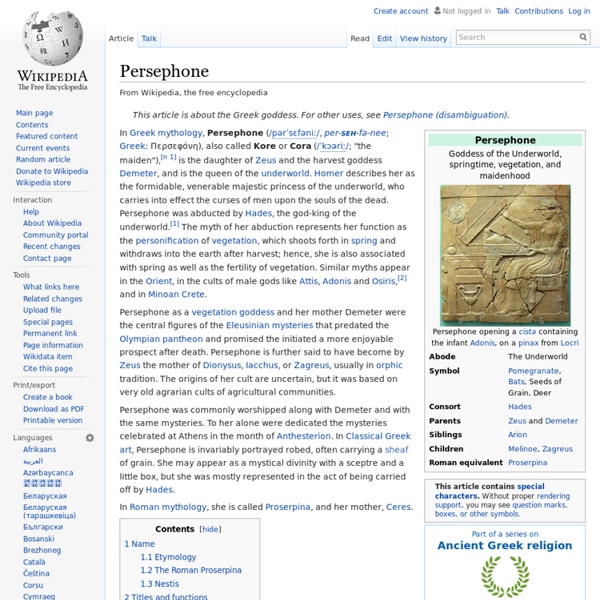 Persephone as a vegetation goddess and her mother Demeter were the central figures of the Eleusinian mysteries that predated the Olympian pantheon and promised the initiated a more enjoyable prospect after death. Persephone is further said to have become by Zeus the mother of Dionysus, Iacchus, or Zagreus, usually in orphic tradition. The origins of her cult are uncertain, but it was based on very old agrarian cults of agricultural communities. Name[edit] Etymology[edit] Persephone or "the deceased woman" holding a pomegranate. Persephatta (Περσεφάττα) is considered to mean "female thresher of corn," going by "perso-" relating to Sanskrit "parsa", "sheaf of corn" and the second constituent of the name originating in Proto-Indo European *-gʷʰn-t-ih, from the root *gʷʰen "to strike".[8] An alternative etymology is from φέρειν φόνον, pherein phonon, "to bring (or cause) death".[9] John Chadwick speculatively relates the name of Persephone with the name of Perse, daughter of Oceanus.[12] Italy.

New Series: Last Witness – PRXOfficial For many years I’ve kept a folder by my desk labeled: “Too Late Stories.” It’s full of newspaper clippings and obituaries about people I would have loved to interview, but I was too late. People like Mark Matthews, the last of the legendary Buffalo Soldiers. They were African-American soldiers who fought in the Indian wars of the late 1800’s. Proserpina Ancient Roman goddess Cult and myths[edit] Origin as Libera[edit] Libera was officially identified with Proserpina in 205 BC, when she acquired a Romanised form of the Greek mystery rites and their attendant mythology. In the late Republican era, Cicero described Liber and Libera as Ceres' children. At around the same time, possibly in the context of popular or religious drama, Hyginus equated her with Greek Ariadne, as bride to Liber's Greek equivalent, Dionysus.[3] The older and newer forms of her cult and rites, and their diverse associations, persisted well into the late Imperial era.

Wotan German[edit] Etymology[edit] Ultimately from Proto-Germanic *Wōdanaz, cognate with English Woden, Old Frisian Weda, Old Norse Óðinn. Attested since the 12th century in the Chronicon of Godfrey of Viterbo, where it is spelled Wotan. In Old High German, the name could be spelled Wodan, Wotan, Wuotan or Woatan, depending on regional dialect. After Christianization, the name persisted in folklore and formed various derivations, such as Old High German Wuotunc, Wodunc, medieval Wüetung. Seen from the air, the dry summer reveals an ancient harvest of archaeological finds For an aerial archaeologist 2018 has been a bumper year. The long, hot summer has revealed ancient landscapes not visible from ground level, but easily recognised in fields of growing crops from the air. The principle behind the appearance of cropmarks is simple.

Pygmalion Pygmalion or Pigmalion may refer to: Mythology[edit] Stage[edit] Film[edit] Music[edit] Sigurd The death of Siegfried. Hagen stands to the right of Siegfried with a bow. From the Hundeshagenscher Kodex. Sigurd (Old Norse: Sigurðr) or Siegfried (Middle High German: Sîvrit) is a legendary hero of Germanic mythology, who killed a dragon and was later murdered.

Pictures of The Global Conflict of World War I ~ vintage everyday At the start of the war, the largest of the European belligerents were all colonial powers -- they had people and valuable assets stationed in countries all over the Earth. These multinational interests, along with overseas alliances and the modernization of sea transport, are what put the "world" in World War I. Enemy nations attacked each other's colonies and fleets, and laborers and soldiers were recruited from colonized countries, and brought to the front lines. Pyramus and Thisbe Plot[edit] In Ovid's Metamorphoses, Pyramus and Thisbe are two lovers in the city of Babylon who occupy connected houses/walls, forbidden by their parents to be wed, because of their parents' rivalry. Through a crack in one of the walls, they whisper their love for each other.

Brunhild Brunhild, also known as Brunhilda or Brynhild (Old Norse Brynhildr, Middle High German Brünhilt, Modern German Brünhild or Brünhilde) is a powerful female figure from Germanic heroic legend. She may have her origins in the Visigothic princess Brunhilda of Austrasia. In the Norse tradition, Brunhild is a shieldmaiden or valkyrie, who appears as a main character in the Völsunga saga and some Eddic poems treating the same events. Kaliningrad: the unique World Cup city that has twice tried to erase its past Kaliningrad and its new US$300m “Arena Baltika” stadium has been thrown into the spotlight by the football World Cup. But will the city’s latest project finally succeed in eclipsing its pre-war German history? Nestled between Lithuania to the north and east, Poland to the south, and the Baltic Sea to the west, Kaliningrad is today an “exclave” of Russia. But the region was once at the centre of European history and culture.