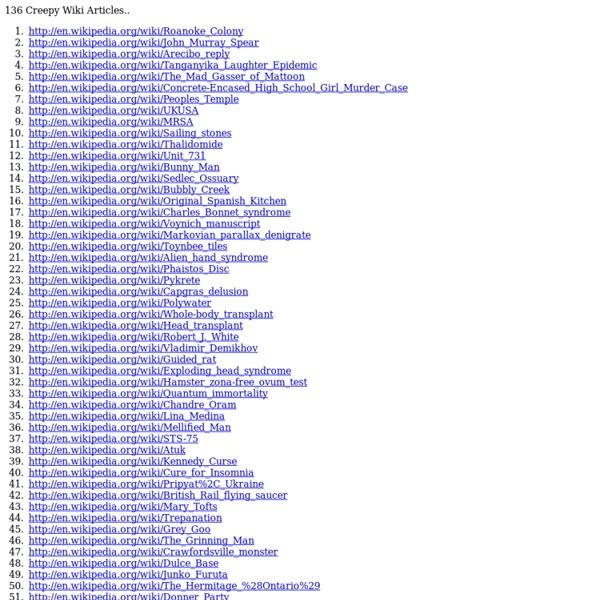 Guide Hub Welcome to the Guide Hub! If you're looking for answers or advice, you should be able to find either of them below. If you have an idea for a Guide that you'd like to see added to this page, contact a member of Senior Staff and show them a draft. Site Rules: You will be expected to know and understand the rules of the wiki. The Elements Revealed: An Interactive Periodic Table In the October 2011 issue of Scientific American, we celebrate the International Year of Chemistry. Learn more about its impact on our daily lives in our Special Report. UPDATED: 06/18/2013 In honor of the 2013 Lindau meeting, which focuses on chemistry, we have updated our interactive periodic table with links to Nature Chemistry's In Your Element essay series.

Some Bizzare and Odd things around us… Beauty of the nature lies in viewer’s eyes. A photograph is just a way to show or represent that beauty. Here is a bunch of some wonderful pictures which are not only the example of beautiful photography but are also a photograph of some miracles happening in the world. You can also call it the creativity and innovation of photographer’s mind. I think it was at the peak while taking these pictures. What You'll Wish You'd Known January 2005 (I wrote this talk for a high school. I never actually gave it, because the school authorities vetoed the plan to invite me.) When I said I was speaking at a high school, my friends were curious. What will you say to high school students? So I asked them, what do you wish someone had told you in high school?

Seeing Theory - Basic Probability Chance Events Randomness is all around us. Probability theory is the mathematical framework that allows us to analyze chance events in a logically sound manner. The probability of an event is a number indicating how likely that event will occur. This number is always between 0 and 1, where 0 indicates impossibility and 1 indicates certainty. National Jukebox LOC.gov WARNING: Historical recordings may contain offensive language. Read the disclaimer Now Playing... HUB09 Keyboard Shortcuts Timeline SShuffle JNext KPrevious FFancy AAdd to List CComment HShare EnterView Thing Slideshow Moving slabs [This Dynamic Earth, USGS] The layer of the Earth we live on is broken into a dozen or so rigid slabs (called tectonic plates by geologists) that are moving relative to one another. "Historical perspective"

Unusual Words Unusual Words A by no means exhaustive list of rare, obscure, strange and sometimes funny words and their meanings that only seem to crop up in crosswords and dictionaries. Words that are used so seldom, you wonder who invented them and why. 10 Awesome Online Classes You Can Take For Free Cool, but you need iTunes for nearly everything, and that gets an 'F.' Are there really no other places to get these lessons? I was sure there are some on Academic Earth. Flagged 1. 7 of them are available via YouTube. 2. iTunes is free.

Driftwood Decor: 24 Dramatic Art Lamps & Lighting Designs It is as if these designers set an insane challenge for themselves: see just how many there are to craft pieces and parts of every kind of lamp and lighting fixture ever created – all from recycled scrap and found driftwood. One of the fascinating results of this design experiment: a number of lights in which the wood takes on opposite rolls from one object to the next – acting as the suspension cable for a ceiling light or stalk of a table lamp in one case, then as their respective shades in the next. Likewise, the contrasts within a given kind of light – such as the series of simple table lamps shown above – is particularly stark when you set them next to one another. From similarly-sized sticks and single stand-alone logs to random pieces of driftwood stacked upon one another, the effect varies dramatically.