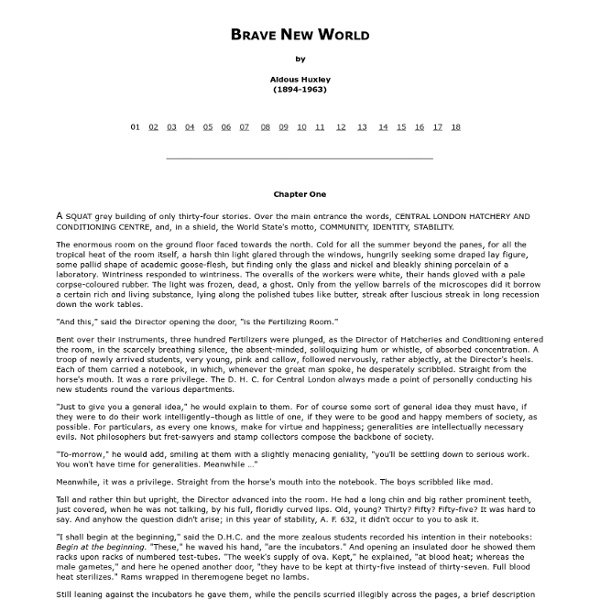 Chapter One A SQUAT grey building of only thirty-four stories. Over the main entrance the words, CENTRAL LONDON HATCHERY AND CONDITIONING CENTRE, and, in a shield, the World State's motto, COMMUNITY, IDENTITY, STABILITY. The enormous room on the ground floor faced towards the north. Cold for all the summer beyond the panes, for all the tropical heat of the room itself, a harsh thin light glared through the windows, hungrily seeking some draped lay figure, some pallid shape of academic goose-flesh, but finding only the glass and nickel and bleakly shining porcelain of a laboratory. Wintriness responded to wintriness. "And this," said the Director opening the door, "is the Fertilizing Room." Bent over their instruments, three hundred Fertilizers were plunged, as the Director of Hatcheries and Conditioning entered the room, in the scarcely breathing silence, the absent-minded, soliloquizing hum or whistle, of absorbed concentration. Meanwhile, it was a privilege. Responds by budding. Mr.

Historic Photos From the NYC Municipal Archives - In Focus The New York City Municipal Archives just released a database of over 870,000 photos from its collection of more than 2.2 million images of New York throughout the 20th century. Their subjects include daily life, construction, crime, city business, aerial photographs, and more. I spent hours lost in these amazing photos, and gathered this group together to give you just a glimpse of what's been made available from this remarkable collection.

The Best Science Fiction Books (According to Reddit) Recently, someone asked Reddit for a list of the best science fiction books of all time. Being a fan of sci-fi, and wanting to expand my own reading list, I thought it would be helpful to tally the results and preserve them here for future reference. I've also included selected quotes from the comments, as well as my own notes on the books I've already read. PS: All book images in this post are copyright Amazon, and were retrieved using my Big Book Search Engine. So, without further ado, here are the Greatest Sci-Fi Books of All Time, ordered by upvote count: Free Science Fiction Classics on the Web: Huxley, Orwell, Asimov, Gaiman & Beyond Today we're bringing you a roundup of some of the great Science Fiction, Fantasy and Dystopian classics available on the web. And what better way to get started than with Aldous Huxley reading a dramatized recording of his 1932 novel, Brave New World. The reading aired on the CBS Radio Workshop in 1956. You can listen to Part 1 here and Part 2 here. (FYI: You can download Huxley's original work -- as opposed to the dramatized version -- in audio by signing up for a Free Trial with Audible.com, and that applies to other books mentioned here as well.)

4 Sites with LOTS Of Completely Free Ebooks That Don't Suck - StumbleUpon If you’re a fervent reader and nerd like I am, you’ve probably encountered quite a lot of writing online. However, most of them are either absolute garbage or entirely illegal. It’s hard to find good, legal reads online – unless you know where to look. Grimes: 'I want to remake cult sci-fi movie 'Dune'' March 28, 2013 13:28 Singer claims it would be her 'dream' to direct a new version of the '80s film Grimes has revealed that she wants to remake '80s cult movie Dune. The electro-pop artist, who has referenced Frank Herbert's 1965 sci-fi novel in her songs, claims it would be her "dream" to make a new film version.

100 Best Novels « Modern Library ULYSSES by James Joyce Written as an homage to Homer’s epic poem The Odyssey, Ulysses follows its hero, Leopold Bloom, through the streets of Dublin. Overflowing with puns, references to classical literature, and stream-of-consciousness writing, this is a complex, multilayered novel about one day in the life of an ordinary man. Initially banned in the United States but overturned by a legal challenge by Random House’s Bennett Cerf, Ulysses was called “a memorable catastrophe” (Virginia Woolf), “a book to which we are all indebted” (T.

30 Very Funny Books By Gina Barreca, Ph.D. It's a dreary day, so I thought I'd indulge myself and come up with a list of my favorite comedies. A caveat, however: this is not a fancy English-professor-y list of the finest, most exquisitely crafted, most erudite or intellectually sophisticated works on paper in the language. This is a list of the books that make me laugh until my mascara starts to run. These are books to read over your first cup of coffee or just before you go to sleep . Remember: a day you've laughed is day you haven't wasted--even if you didn't get out of bed.

Anthology of Thirties Prose Light came and went and came again, the booming strokes of three o'clock beat out across the town in thronging bronze from the courthouse bell, light winds of April blew the fountain out in rainbow sheets, until the plume returned and pulsed, as Grover turned into the Square. He was a child, dark-eyed and grave, birthmarked upon his neck-- a berry of warm brown-and with a gentle face, too quiet and too listening for his years. The scuffed boy's shoes, the thick-ribbed stockings gartered at the knees, the short knee pants cut straight with three small useless buttons at the side, the sailor blouse, the old cap battered out of shape, perched sideways up on top of the raven head, the old soiled canvas bag slung from the shoulder, empty now, but waiting for the crisp sheets of the afternoon-these friendly, shabby garments, shaped by Grover, uttered him. He turned and passed along the north side of the Square and in that moment saw the union of Forever and of Now. "Old stingy Crockers!"

Huxley said that Brave New World was inspired by the utopian novels of H.G. Wells.! by tapoko Nov 26