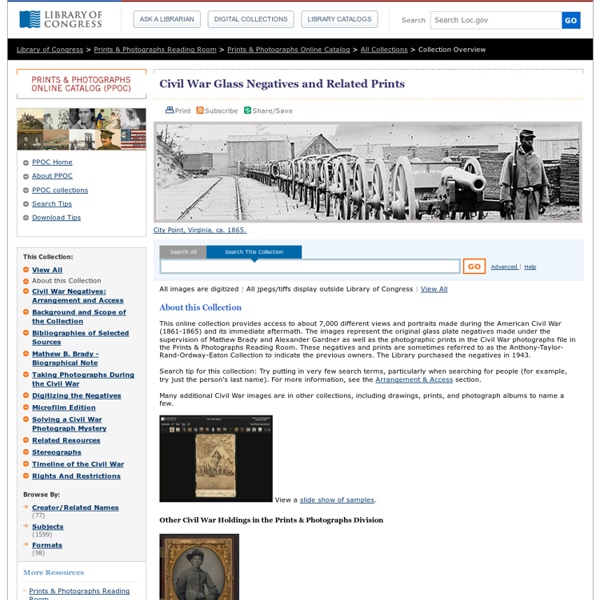 All images are digitized | All jpegs/tiffs display outside Library of Congress | View All This online collection provides access to about 7,000 different views and portraits made during the American Civil War (1861-1865) and its immediate aftermath. The images represent the original glass plate negatives made under the supervision of Mathew Brady and Alexander Gardner as well as the photographic prints in the Civil War photographs file in the Prints & Photographs Reading Room. These negatives and prints are sometimes referred to as the Anthony-Taylor-Rand-Ordway-Eaton Collection to indicate the previous owners. The Library purchased the negatives in 1943. Search tip for this collection: Try putting in very few search terms, particularly when searching for people (for example, try just the person's last name). Many additional Civil War images are in other collections, including drawings, prints, and photograph albums to name a few. View a slide show of samples. Andrew J.

To My Old Master In 1864, after 32 long years in the service of his master, Jourdon Anderson and his wife, Amanda, escaped a life of slavery when Union Army soldiers freed them from the plantation on which they had been working so tirelessly. They grasped the opportunity with vigour, quickly moved to Ohio where Jourdon could find paid work with which to support his growing family, and didn’t look back. Then, a year later, shortly after the end of the Civil War, Jourdon received a desperate letter from Patrick Henry Anderson, the man who used to own him, in which he was asked to return to work on the plantation and rescue his ailing business. Jourdon’s reply to the person who enslaved his family, dictated from his home on August 7th, is everything you could wish for, and quite rightly was subsequently reprinted in numerous newspapers.

Civil War Glass Negatives and Related Prints - Solving a Civil War Photograph Mystery - Prints & Photographs Online Catalog All images are digitized | All jpegs/tiffs display outside Library of Congress | View All Is this photo fact or fiction? The title information on the bottom left corner of the print says “General Grant at City Point,” so the image claims to show General Ulysses S. Grant on horseback, in front of his troops at City Point, Virginia, during the American Civil War. But, once you look closely at the content of the photo, questions begin to surface.

SAT Subject Test: U.S. History: Toward War Toward War Abraham Lincoln’s victory in the election of 1860 began a chain of events that pushed the nation rapidly toward civil war. Secession During the 1860 election, some Southerners threatened secession pending Lincoln’s victory, even though he promised that while he would forbid the extension of slavery into the territories, he would not interfere with slavery in the South. In December 1860, soon after Lincoln’s victory, a special South Carolina convention voted unanimously for secession. By February 1861, six more Southern states followed suit: Alabama, Mississippi, Florida, Georgia, Louisiana, and Texas.

The Battle Over Reconstruction As the Civil War drew to a close, the social, political and economic conditions within the rebellious southern states fueled discussion about how to restore them to the Union. This series of lesson plans will examine the nature and extent of some of these social, political and economic conditions and how they worked to shape the debate about restoring southern states to the Union as well as their lasting impact in shaping the national debate in the years following Reconstruction. Beyond the obvious material destruction, there was more to reconstruct in the South than buildings, farms, manufacturing and railroads—there were social and political relationships to rebuild. Yet, it is impossible to understand Reconstruction fully without a grasp of the social and economic upheaval the war brought with it.

Women and Freedmen's Aid, DBQ: Part A This question is based on the accompanying documents (1-8). The question is designed to test your ability to work with historical documents. Some of the documents have been edited for the purposes of this question. As you analyze the documents, take into account both the source of each document and any point of view that may be presented in the document. Historical Context: Union & Confederate Officer's Jackets Union After the fall of Fort Sumter, the United States War Department was unable to make enough uniforms fast enough. The northern states were told to dress their own companies.

Lincoln Papers: Lincoln Assassination: Introduction Abraham Lincoln Papers On the evening of April 14, 1865, while attending a special performance of the comedy, "Our American Cousin," President Abraham Lincoln was shot. Accompanying him at Ford's Theater that night were his wife, Mary Todd Lincoln, a twenty-eight year-old officer named Major Henry R. Rathbone, and Rathbone's fiancee, Clara Harris. After the play was in progress, a figure with a drawn derringer pistol stepped into the presidential box, aimed, and fired. The president slumped forward.