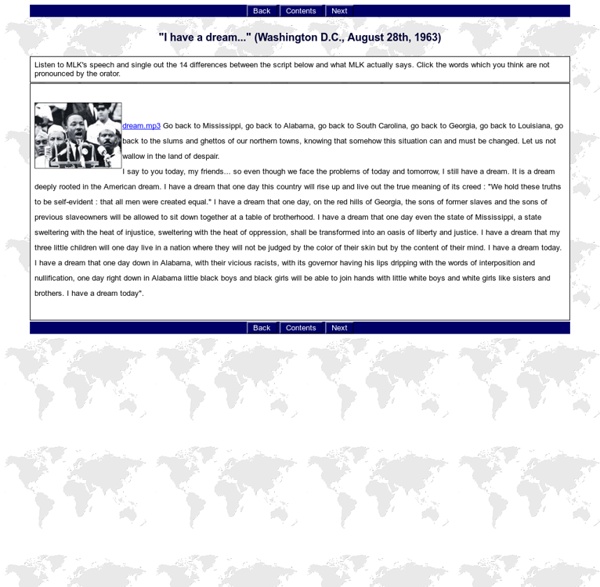 Freedom’s Ring: King’s “I Have a Dream” Speech 100 Google Docs Tips November 9th, 2009 Students and educators have a wealth of learning and productivity tools available to them online. Google offers some of the highest-quality resources on the web to meet all your study and teaching needs, and all you need to access them is an internet connection. The Google Docs collection provides a streamlined, collaborative solution to writing papers, organizing presentations and putting together spreadsheets and reports. Keyboard Shortcuts Navigate your documents and screen a lot faster when you use these keyboard shortcuts for formatting and more. Productivity Hacks These hacks will make your Google Docs experience even more efficient and streamlined. Features and Tools Make use of features and tools like Docs Translation or CSS Editing to customize your docs and make them work for you. Collaboration One of the best things about Google Docs is that you get to share and collaborate on projects with others. Files, Folders and Filters Organization Edits Synchronization Search

Martin Luther King, Jr. Advertisement. EnchantedLearning.com is a user-supported site. As a bonus, site members have access to a banner-ad-free version of the site, with print-friendly pages.Click here to learn more. (Already a member? Click here.) Martin Luther King, Jr., was a great man who worked for racial equality and civil rights in the United States of America. Young Martin was an excellent student in school; he skipped grades in both elementary school and high school . Martin experienced racism early in life. After graduating from college and getting married, Dr. During the 1950's, Dr. Dr. Commemorating the life of a tremendously important leader, we celebrate Martin Luther King Day each year in January, the month in which he was born. Timeline of Martin Luther King Jr.' Activities on MLK:

Thinking and memorizing; test preparation and taking menus Your Study Guides and Strategies starts here! Home An educational public service helping learners succeed since 1996:over 10.4 million visitors in 39 languages in 2011. Study Guides and Strategies Courage is not simplyone of the virtues,but the form of every virtueat the testing point. C. Study guidesfolder menus Thinking and memorizing; test preparation and taking Thinking The Role of Silence in Learning Stresses and responsibilities can negatively impact your preparation and performance... ConcentratingConcentration: the ability to direct your thinking... Thinking criticallyStrategies for critical thinking in learning and project management... Thinking criticallySecond stage exercise in critical thinking:topic and project development ... Thinking creativelyNine considerations for thinking creatively... Radical thinkingAre you looking for new ideas? Thinking aloud/private speechWhen we learned as infants and children, thinking aloud or saying what we are thinking was accepted Memorizing Test taking

Rosa Parks Rosa Parks, born Rosa Louise McCauley (February 4, 1913 - October 24, 2005) was a pivotal figure in the fight for civil rights. She was a protester of segregation laws in the US, and her actions led to major reforms (changes), including a Supreme Court ruling against segregation. Arrested for Not Giving up Her Bus Seat to a White Man On December 1, 1955, a Montgomery, Alabama, bus driver ordered Mrs. Bus Boycott Mrs. On February 1, 1956, the MIA (the Montgomery Improvement Association, which was formed after Mrs. Supreme Court Ruling On November 13, 1956, the US Supreme Court ruled that segregation on city buses is unconstitutional. Continuing the Civil Rights Movement In 1957, after receiving many death threats, Mrs. After her death, on October 24, 2005, Mrs. Related Pages:

Reader Ideas | Teaching the Civil Rights Movement Jeremy M. Lange for The New York TimesThe International Civil Rights Center and Museum opened in 2010 inside a former Woolworth building in Greensboro, N.C. The store was the site of a series of luncheonette “sit-ins” against segregation beginning on Feb. 1, 1960. Go to related article » This month, we asked educators, How Do You Teach the Civil Rights Movement? Many echoed the findings of the Southern Poverty Law Center by writing that this era of history is little taught in their own schools and districts. Just as many educators mentioned the importance of teaching the civil rights movement in the context of African-American history as a whole, since many students bring very little background knowledge to the subject. A comment from John Padula, a Boston middle school teacher, brought together many of the points others raised: I teach grades 6, 7 and 8 in the Boston Public Schools. It’s not too late to add your own thoughts. History, Social Studies, Civics English Language Arts The Arts

9 Characteristics Of 21st Century Learning The label of “21st Century learning” is vague, and is an idea that we here at TeachThought like to take a swing at as often as possible, including: –weighing the magic of technology with its incredible cost and complexity –underscoring the potential for well thought-out instructional design –considering the considerable potential of social media platforms against its apparent divergence from academic learning Some educators seek out the ideal of a 21st century learning environment constantly, while others prefer that we lose the phrase altogether, insisting that learning hasn’t changed, and good learning looks the same whether it’s the 12th or 21st century. At TeachThought, we tend towards the tech-infused model, but do spend time exploring the limits and challenges of technology, the impact of rapid technology change, and carefully considering important questions before diving in head-first. The size of the circles on the map are intended to convey priority. 1. 2. 3. 4. 5. 6. 7. 8. 9.