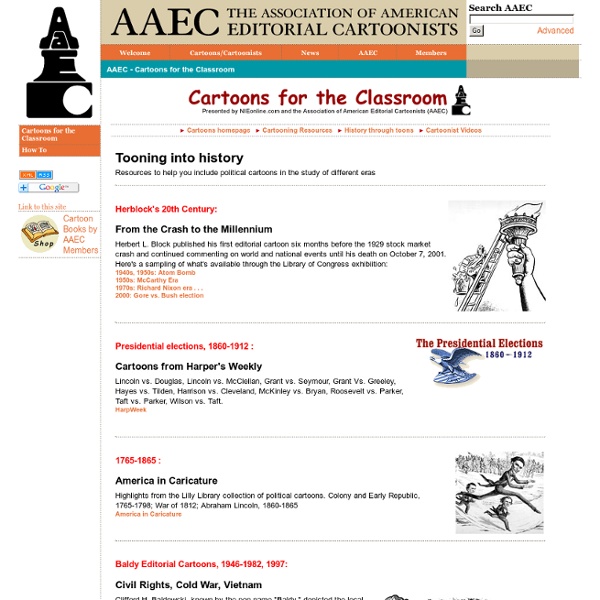 Tooning into history Resources to help you include political cartoons in the study of different eras Herblock's 20th Century: From the Crash to the Millennium Herbert L. Presidential elections, 1860-1912 : Cartoons from Harper's Weekly Lincoln vs. America in Caricature Highlights from the Lilly Library collection of political cartoons. Baldy Editorial Cartoons, 1946-1982, 1997: Civil Rights, Cold War, Vietnam Clifford H. Cartoons from the Clifford H. Civil War and Reconstruction Who was Thomas Nast? His cartoons popularized the elephant to symbolize the Republican Party and the donkey as the symbol for the Democratic Party. Click here to find out more about Thomas Nast, including a biography, timeline and portfolio of his most important cartoons. Political cartoons from the presidency of Franklin D. Waiting for the New Deal, Supreme Court Reform, War years 1942, 1943 . . . Harry S. Post World War II cartoon resources Oliphant's Anthem: Pat Oliphant at the Library of Congress Related:  American History

Bryan's "Cross of Gold" Speech: Mesmerizing the Masses The most famous speech in American political history was delivered by William Jennings Bryan on July 9, 1896, at the Democratic National Convention in Chicago. The issue was whether to endorse the free coinage of silver at a ratio of silver to gold of 16 to 1. (This inflationary measure would have increased the amount of money in circulation and aided cash-poor and debt-burdened farmers.) After speeches on the subject by several U.S. Senators, Bryan rose to speak. The thirty-six-year-old former Congressman from Nebraska aspired to be the Democratic nominee for president, and he had been skillfully, but quietly, building support for himself among the delegates. Listen to Audio: I would be presumptuous, indeed, to present myself against the distinguished gentlemen to whom you have listened if this were but a measuring of ability; but this is not a contest among persons. But in this contest, brother has been arrayed against brother, and father against son. We do not come as individuals.

Digital History We are very sorry, but you have reached a page that has moved or no longer exists. Please visit our home page to experience our new look and updated navigation. On August 8, 2012, Digital History switched to a new interface. We have been restructuring the database and the organization of Digital History for the past three years, and we feel this makeover will significantly improve the usability of our materials. Although the links to our textbook, primary sources, and other educational materials changed in the new interface, we believe the benefits significantly outweigh any inconvenience. Please email Sara McNeil at smcneil@uh.edu if you have any questions about Digital History. Documents Relating to American Foreign Policy Prior to 1898 Documents Relating to American Foreign Policy Pre-1898 Pre-1776 The Mayflower Compact, 1620 John Winthrop, "City on a Hill," 1630 The Act of Surrender of the Great Charter of New England to His Majesty : 1635 Agreement of the Settlers at Exeter in New Hampshire, 1639 The Articles of Confederation of the United Colonies of New England; May 19, 1643 King Philip's War, 1675 King William's War, 1689 The French and Indian War Queen Ann's War, 1702 Father Rasle's War, 1724 David A. The French and Indian Wars Baron de Dieskau to Count d'Argenson (letter), Written at: Camp of the English army at Lake St. The French and Indian War's Impact on America 1755, The French and Indian War The Indian Wars THE ROLE OF THE DUTCH IN THE IROQUOlS WARS by Peter Lowensteyn The Seven Years War Governor Glen, The Role of the Indians in the Rivalry Between France, Spain, and England, 1761 The Boston Tea Party Anonymous Account of the Boston Massacre John Adams, "Novanglus No. 7," January 1775 The Battle of Bunker Hill, Lieutenant J.

How The USA Expanded (In One Mesmerizing Animated GIF) The 90-Second History Of Education 9.80K Views 0 Likes Well here's an insanely detailed infographic to peruse. Rewind Your VHS Tapes Or Face $1 Penalty 623 Views 0 Likes Was it really that long ago when you had to stand up and walk across the room to rewind our VHS tapes to re-watch a favorite scene or catch a softly spoken line that you missed? POP QUIZ: What Is History? 3.42K Views 0 Likes I love these thought-provoking questions. Encyclopædia Britannica's Guide to Women's History For millennia, women have left their mark on the world, at times changing the course of history and at other times influencing small but significant spheres of life. Only in the past century, however, have concerted efforts been made to represent women's contributions more fully in history books. Consequently, changes in status for many women in modern times—the right to own property, to vote, and to choose their own careers—may obscure the accomplishments made by women of earlier eras. In selecting 300 influential women, Encyclopædia Britannica has included both contemporary women who are changing today's world and those whose contributions have endured through the ages. Some, though they lived centuries ago, are still alive in popular culture; music and poetry by the Roman Catholic abbess Hildegard can be heard in contemporary recordings, and Murasaki Shikibu's The Tale of Genji, one of the greatest works of Japanese literature, continues to inspire new translations.

Welcome to OurDocuments.gov The following is a list of 100 milestone documents, compiled by the National Archives and Records Administration, and drawn primarily from its nationwide holdings. The documents chronicle United States history from 1776 to 1965. Complete List of Documents Please note that you can always use the thumbnail images at the top of every page to navigate directly to any of the 100 Milestone Documents. home 100 milestone documents the people's vote tools for educators news & events national competitions about this site contact information related resources search Privacy & Use Accessibility