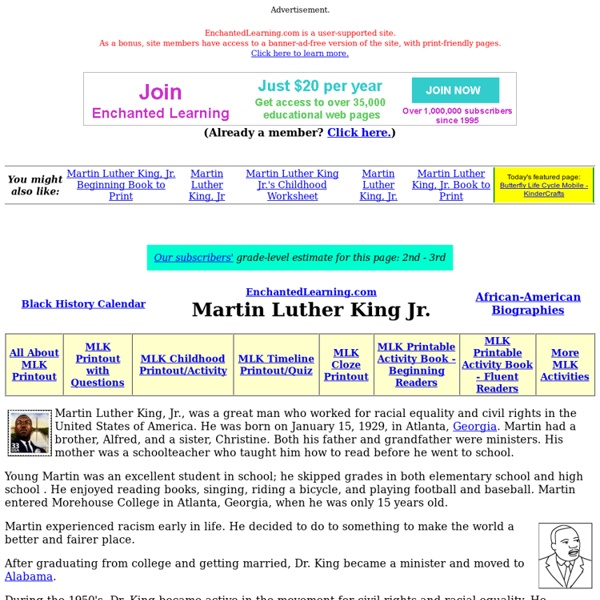 Advertisement. EnchantedLearning.com is a user-supported site. As a bonus, site members have access to a banner-ad-free version of the site, with print-friendly pages.Click here to learn more. (Already a member? Click here.) Martin Luther King, Jr., was a great man who worked for racial equality and civil rights in the United States of America. Young Martin was an excellent student in school; he skipped grades in both elementary school and high school . Martin experienced racism early in life. After graduating from college and getting married, Dr. During the 1950's, Dr. Dr. Commemorating the life of a tremendously important leader, we celebrate Martin Luther King Day each year in January, the month in which he was born. Timeline of Martin Luther King Jr.' Activities on MLK: Related:  Civil/Human Rights

Rosa Parks Rosa Parks, born Rosa Louise McCauley (February 4, 1913 - October 24, 2005) was a pivotal figure in the fight for civil rights. She was a protester of segregation laws in the US, and her actions led to major reforms (changes), including a Supreme Court ruling against segregation. Arrested for Not Giving up Her Bus Seat to a White Man On December 1, 1955, a Montgomery, Alabama, bus driver ordered Mrs. Parks to give up her seat to a white man. Bus Boycott Mrs. On February 1, 1956, the MIA (the Montgomery Improvement Association, which was formed after Mrs. Supreme Court Ruling On November 13, 1956, the US Supreme Court ruled that segregation on city buses is unconstitutional. Continuing the Civil Rights Movement In 1957, after receiving many death threats, Mrs. After her death, on October 24, 2005, Mrs. Related Pages:

Martin Luther King - Biography Martin Luther King, Jr., (January 15, 1929-April 4, 1968) was born Michael Luther King, Jr., but later had his name changed to Martin. His grandfather began the family's long tenure as pastors of the Ebenezer Baptist Church in Atlanta, serving from 1914 to 1931; his father has served from then until the present, and from 1960 until his death Martin Luther acted as co-pastor. Martin Luther attended segregated public schools in Georgia, graduating from high school at the age of fifteen; he received the B. A. degree in 1948 from Morehouse College, a distinguished Negro institution of Atlanta from which both his father and grandfather had graduated. After three years of theological study at Crozer Theological Seminary in Pennsylvania where he was elected president of a predominantly white senior class, he was awarded the B.D. in 1951. In 1954, Martin Luther King became pastor of the Dexter Avenue Baptist Church in Montgomery, Alabama. Selected Bibliography "Martin Luther King, Jr

Freedom’s Ring: King’s “I Have a Dream” Speech Martin Luther King, Jr. Dr. King became a civil rights activist early in his career. He led the 1955 Montgomery Bus Boycott and helped found the Southern Christian Leadership Conference (SCLC) in 1957, serving as its first president. With the SCLC, King led an unsuccessful 1962 struggle against segregation in Albany, Georgia (the Albany Movement), and helped organize the 1963 nonviolent protests in Birmingham, Alabama that attracted national attention following television news coverage of the brutal police response. King also helped to organize the 1963 March on Washington, where he delivered his famous "I Have a Dream" speech. There, he established his reputation as one of the greatest orators in American history. On October 14, 1964, King received the Nobel Peace Prize for combating racial inequality through nonviolence. In 1968, King was planning a national occupation of Washington, D.C., to be called the Poor People's Campaign, when he was assassinated on April 4 in Memphis, Tennessee. Doctoral studies

The History of Racism QUESTION: The History of Racism – What is the state of race relations in 21st Century America? America has had a long history of racism. Racism has infiltrated every aspect of American society and shows no sign of decreasing. When seeking to understand the state of race relations in 21st Century America, one must gain a clear picture of the nature of racism; it is the belief that one group of people with a particular biological make up is superior to other groups with a differing biological make up. In those earlier days in the 20th century, the face of racism was largely black and white. The 21st Century has brought about many attempted changes in society. - We have all sinned and deserve God's judgment. What is your response? Yes, today I am deciding to follow Jesus Yes, I am already a follower of Jesus I still have questions

Reader Ideas | Teaching the Civil Rights Movement Jeremy M. Lange for The New York TimesThe International Civil Rights Center and Museum opened in 2010 inside a former Woolworth building in Greensboro, N.C. The store was the site of a series of luncheonette “sit-ins” against segregation beginning on Feb. 1, 1960. Go to related article » This month, we asked educators, How Do You Teach the Civil Rights Movement? Many echoed the findings of the Southern Poverty Law Center by writing that this era of history is little taught in their own schools and districts. Just as many educators mentioned the importance of teaching the civil rights movement in the context of African-American history as a whole, since many students bring very little background knowledge to the subject. A comment from John Padula, a Boston middle school teacher, brought together many of the points others raised: I teach grades 6, 7 and 8 in the Boston Public Schools. It’s not too late to add your own thoughts. History, Social Studies, Civics English Language Arts The Arts

What is Racism? Racism has existed throughout human history. It may be defined as the hatred of one person by another -- or the belief that another person is less than human -- because of skin color, language, customs, place of birth or any factor that supposedly reveals the basic nature of that person. It has influenced wars, slavery, the formation of nations, and legal codes. During the past 500-1000 years, racism on the part of Western powers toward non-Westerners has had a far more significant impact on history than any other form of racism (such as racism among Western groups or among Easterners, such as Asians, Africans, and others). The most notorious example of racism by the West has been slavery, particularly the enslavement of Africans in the New World (slavery itself dates back thousands of years). This belief was not "automatic": that is, Africans were not originally considered inferior.