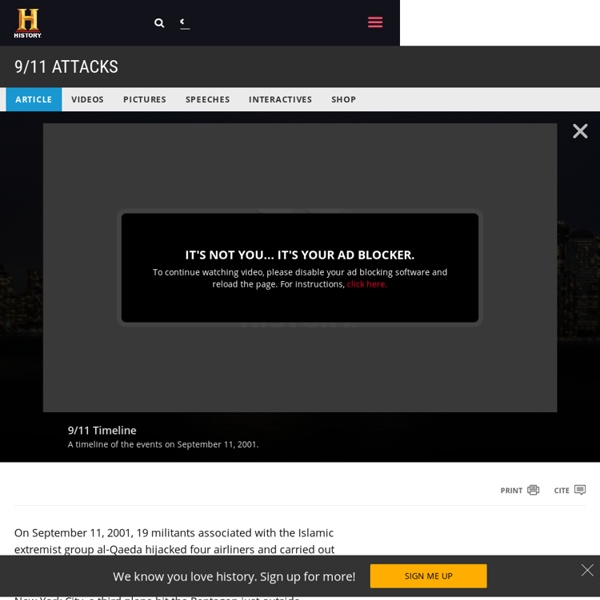 On September 11, 2001, at 8:45 a.m. on a clear Tuesday morning, an American Airlines Boeing 767 loaded with 20,000 gallons of jet fuel crashed into the north tower of the World Trade Center in New York City. The impact left a gaping, burning hole near the 80th floor of the 110-story skyscraper, instantly killing hundreds of people and trapping hundreds more in higher floors. As the evacuation of the tower and its twin got underway, television cameras broadcasted live images of what initially appeared to be a freak accident. Then, 18 minutes after the first plane hit, a second Boeing 767–United Airlines Flight 175–appeared out of the sky, turned sharply toward the World Trade Center and sliced into the south tower near the 60th floor. The collision caused a massive explosion that showered burning debris over surrounding buildings and the streets below. America was under attack. The attackers were Islamic terrorists from Saudi Arabia and several other Arab nations. Related:  American Power and its limits since 1991

Gorbachev, Reagan and the End of the Cold War This is one of the better books on the end of the Cold War. Unlike many American accounts, it is not – at least until its very last paragraph – triumphalist in tone. Wilson recognises that Mikhail Gorbachev was by some distance the most important political actor in the dramatic sequence of events between 1985 and 1991. On the American side he rightly identifies Ronald Reagan, George Shultz and George H.W. Bush as the people who mattered most. He is particularly good at giving Secretary of State Shultz his due. Wilson’s main argument is that nothing that happened during the end of the Cold War was planned. The main strength of Wilson’s account lies in his use of recently declassified American documents, as befits a historian employed at the State Department. Errors on points of detail (there are a number) are outweighed by Wilson’s generally balanced interpretation, except in his concluding paragraph, in which he suddenly turns triumphalist.

Compare Sweden To The United States With its 318,892,103 people, The United States is the 3rd largest country in the world by population. It is the 3rd largest country in the world by area with 9,826,675 square kilometers. Britain's American colonies broke with the mother country in 1776 and were recognized as the new nation of the United States of America following the Treaty of Paris in 1783. During the 19th and 20th centuries, 37 new states were added to the original 13 as the nation expanded across the North American continent and acquired a number of overseas possessions. The two most traumatic experiences in the nation's history were the Civil War (1861-65), in which a northern Union of states defeated a secessionist Confederacy of 11 southern slave states, and the Great Depression of the 1930s, an economic downturn during which about a quarter of the labor force lost its jobs. Languages spoken: English 82.1%, Spanish 10.7%, other Indo-European 3.8%, Asian and Pacific island 2.7%, other 0.7% (2000 census)

9/11 planes flew into computer rooms "At 8:46:30 a.m., five hijackers flew American Airlines Flight 11 (AA 11) with 11 crew and 76 passengers into the north face of WTC 1," according to the Final Report on the Collapse of the World Trade Center Towers produced by the National Institute of Standards and Technology (NIST) in September 2005: "The fuselage was centered on the 96th floor slab and filled the 95th and 96th floors top to bottom," the NIST report says. So, what was on the 95th and 96th floors of the north tower, which were rented by Marsh & McLennan, Lewis Paul "Jerry" Bremer's company? Bremer, it should be noted, was the Bush-appointed proconsul or administrator of occupied Iraq until the end of June 2004. During Bremer's reign there was no metering of the oil that was exported from Iraq. It is also primarily decisions taken by Bremer that are responsible for the misery and chaos that have afflicted Iraq since the U.S. The NIST report provides some information about "General Description of Tenant Layout."

Clinton: Statement on Signing the Antiterrorism and Effective Death Penalty Act of 1996 I have today signed into law S. 735, the "Antiterrorism and Effective Death Penalty Act of 1996." This legislation is an important step forward in the Federal Government's continuing efforts to combat terrorism. I first transmitted antiterrorism legislation to the Congress in February 1995. Most of the proposals in that legislation, the "Omnibus Counterterrorism Act of 1995," were aimed at fighting international terrorism. Together, these two proposals took a comprehensive approach to fighting terrorism both at home and abroad. —provide broad new Federal jurisdiction to prosecute anyone who commits a terrorist attack in the United States or who uses the United States as a planning ground for attacks overseas; —ban fundraising in the United States that supports terrorist organizations; —require plastic explosives to contain chemical markers so that criminals who use them —like the ones that blew up Pan Am Flight 103 —can be tracked down and prosecuted; In the great 1803 case of Marbury v.

Slavery in America - Black History Throughout the 17th and 18th centuries people were kidnapped from the continent of Africa, forced into slavery in the American colonies and exploited to work as indentured servants and labor in the production of crops such as tobacco and cotton. By the mid-19th century, America’s westward expansion and the abolition movement provoked a great debate over slavery that would tear the nation apart in the bloody Civil War. Though the Union victory freed the nation’s four million enslaved people, the legacy of slavery continued to influence American history, from the Reconstruction, to the civil rights movement that emerged a century after emancipation and beyond. When Did Slavery Start? Hundreds of thousands of Africans, both free and enslaved, aided the establishment and survival of colonies in the Americas and the New World. READ MORE: The Last Slave Ship Survivor Gave an Interview in the 1930s. But after the Revolutionary War, the new U.S. Cotton Gin Though the U.S. History of Slavery

Flight Theories The official story of the fates of the four jetliners comandeered on September 11th, 2001, asks us to believe a long series of highly improbable events. But if Flights 11175, and 77 were not flown by hijackers into the Twin Towers and the Pentagon, or if the alleged hijackers were not even on board the flights, then how were they flown into those targets or otherwise disposed of? To answer these questions, a number of theories have emerged and been debated by skeptics of the official story. The theories, including the official one, can be roughly divided into four main ones. The four flights were hijacked by teams of terrorists, who flew three of the jets into the Twin Towers and the Pentagon. There are variations on the second and third theories with regard to what happened to Flight 77, which controllers were supposedly unable to find once its transponder was turned off and it turned around. The plane turned around over Ohio and flew back to the capital, crashing into the Pentagon.

CNN - Clinton signs anti-terrorism bill - April 24, 1996 Here's Everyone Who's Immigrated to the U.S. Since 1820 From 1820 to 2013, 79 million people obtained lawful permanent resident status in the United States. The interactive map below visualizes all of them based on their prior country of residence. The brightness of a country corresponds to its total migration to the U.S. at the given time. Use the controls at the bottom to stop / resume the animation or to move back and forth in time. Two Centuries of U.S. Over time, the sources of immigration trace a clear path across the world. Through most of the 1800’s, immigration came predominantly from Western Europe (Ireland, Germany, the U.K.). Here are the largest immigration “waves” charted over time, showing the progression. While it may seem that immigration over the last few decades has been higher than ever before, the picture looks very different when viewed relative to the size of the U.S. population. Here is the same chart, with the immigration shown as a percentage of the U.S. population. Credit: Embed as HD video: Follow Metrocosm Related Credit:

Remarks on Operation Restore Hope (May 5, 1993)—Miller Center To all of our distinguished guests from all the services, to General Powell and the Joint Chiefs, Secretary Aspin, Mr. Vice President, ladies and gentlemen, and especially to General Johnston and the men and women of the Unified Task Force in Somalia. General Johnston has just reported to me: Mission accomplished. And so, on behalf of all the American people, I say to you, General, and to all whom you brought with you: Welcome home, and thank you for a job very, very well done. You represent the thousands who served in this crucial operation, in the First Marine Expeditionary Force, in the Army 10th Mountain Division, aboard the Navy's Tripoli Amphibious Ready Group, in the Air Force and Air National Guard airlift squadrons, and in other units in each of our services. Over 30,000 American military personnel served at sometime in these last 5 months in Somalia.

Statement on Kosovo (March 24, 1999)—Miller Center My fellow Americans, today our Armed Forces joined our NATO allies in airstrikes against Serbian forces responsible for the brutality in Kosovo. We have acted with resolve for several reasons. We act to protect thousands of innocent people in Kosovo from a mounting military offensive. We act to prevent a wider war, to diffuse a powder keg at the heart of Europe that has exploded twice before in this century with catastrophic results. And we act to stand united with our allies for peace. By acting now, we are upholding our values, protecting our interests, and advancing the cause of peace. Text Of Clinton's Rwanda Speech Text of President Clinton's address to genocide survivors at the airport in Kigali, Rwanda, as provided by the White House. Thank you, Mr. President. First, let me thank you, Mr. President, and Vice President Kagame, and your wives for making Hillary and me and our delegation feel so welcome. I'd also like to thank the young students who met us and the musicians, the dancers who were outside. I have a great delegation of Americans with me, leaders of our government, leaders of our Congress, distinguished American citizens. I have come today to pay the respects of my nation to all who suffered and all who perished in the Rwandan genocide. During the 90 days that began on April 6 in 1994, Rwanda experienced the most intensive slaughter in this blood-filled century we are about to leave. From Kibuye in the west to Kibungo in the east, people gathered seeking refuge in churches by the thousands, in hospitals, in schools. Lists of victims, name by name, were actually drawn up in advance.

Related:
Related:  American Power and its limits since 1991