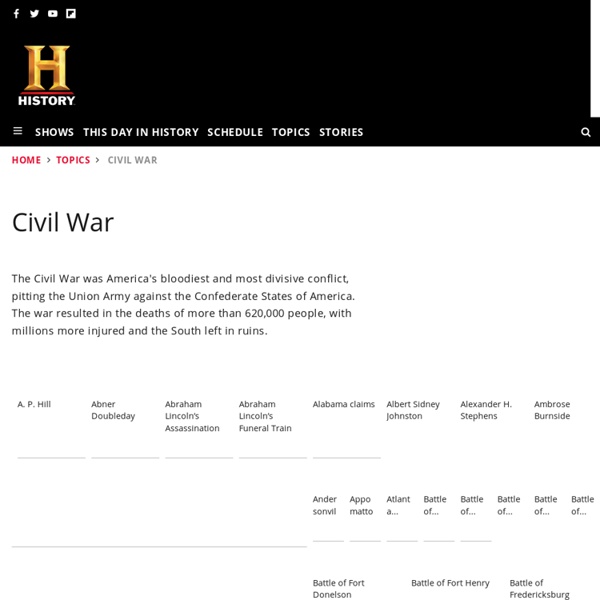 Civil War Audio What is a TV provider? A TV service provider is the company you pay for your television service. It could be a cable company, a satellite company or a telecommunications company. Why am I being asked to sign in with a TV provider to watch certain video content? TV service providers play a key role in delivering our content. American Civil War History - American Civil War In the mid-19th century, while the United States was experiencing an era of tremendous growth, a fundamental economic difference existed between the country’s northern and southern regions. In the North, manufacturing and industry was well established, and agriculture was mostly limited to small-scale farms, while the South’s economy was based on a system of large-scale farming that depended on the labor of black slaves to grow certain crops, especially cotton and tobacco. Growing abolitionist sentiment in the North after the 1830s and northern opposition to slavery’s extension into the new western territories led many southerners to fear that the existence of slavery in america—and thus the backbone of their economy—was in danger. In 1854, the U.S. Congress passed the Kansas-Nebraska Act, which essentially opened all new territories to slavery by asserting the rule of popular sovereignty over congressional edict.

American Civil War History Hostilities began on April 12, 1861, when Confederate forces fired upon Fort Sumter. While in the Western Theater the Union made significant permanent gains, in the Eastern Theater, battle was inconclusive in 1861–62. The autumn 1862 Confederate campaigns into Maryland and Kentucky failed, dissuading British intervention.[citation needed] Lincoln issued the Emancipation Proclamation, which made ending slavery a war goal.[14] To the west, by summer 1862 the Union destroyed the Confederate river navy, then much of their western armies and seized New Orleans. The 1863 Union siege of Vicksburg split the Confederacy in two at the Mississippi River.

Causes of the Civil War The issues that caused the Civil War had been brewing since the United States was formed. The most important causes Southerners listed for the war were unfair taxation, states' rights, and the slavery issue. Here are some primary sources that show how heated these issues had become by the late 1850s. Unfair Taxation The history and economy of the North were very different from those of the South. A Brief Overview of the American Civil War Abraham Lincoln (National Archives) The Civil War is the central event in America's historical consciousness. While the Revolution of 1776-1783 created the United States, the Civil War of 1861-1865 determined what kind of nation it would be.

What Percentage of Americans Died in the US Civil War? - Other Voice Review About 620,000 Americans, or 2% of the population, died in the American Civil War. That’s proportionally equivalent to 6 million people today. The US Civil War took place between the Northern states (Union) and the Southern states (Confederacy) between 1861 and 1865. The victory of the North ended slavery and formed the American states into a unified nation. The price however, was the lives of 620,000 people. This was 2% of the American population. as there were a little over 31 million US residents at the time.