Frontier Life in the West 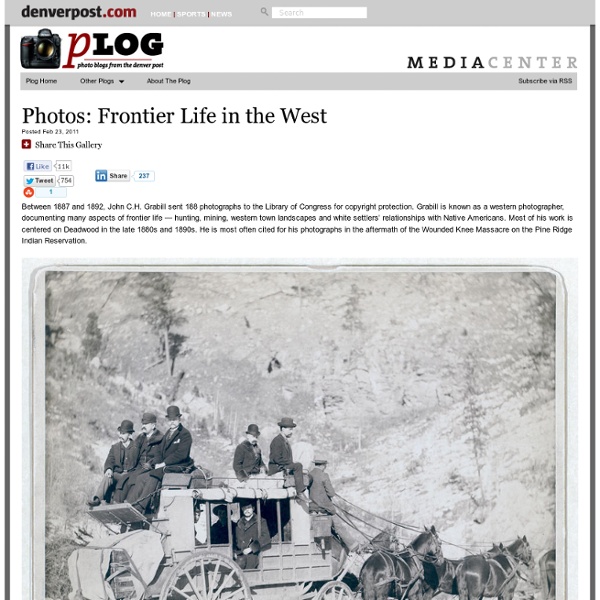 Posted Feb 23, 2011 Share This Gallery inShare281 Between 1887 and 1892, John C.H. Grabill sent 188 photographs to the Library of Congress for copyright protection. Title: "The Deadwood Coach" Side view of a stagecoach; formally dressed men sitting in and on top of coach. 1889. Title: Villa of Brule A Lakota tipi camp near Pine Ridge, in background; horses at White Clay Creek watering hole, in the foreground. 1891. Title: Ox teams at Sturgis, D.T. Title: The last large bull train on its way from the railroad to the Black Hills Summary: Train of oxen and three wagons in open field. 1890. Title: Freighting in "The Black Hills". Title: Freighting in the Black Hills A woman and a boy using bullwhackers to control a train of oxen. Title: At the Dance. Title: Indian chiefs who counciled with Gen. Title: U.S. Title: "Hostile Indian camp" Bird's-eye view of a large Lakota camp of tipis, horses, and wagons--probably on or near Pine Ridge Indian Reservation. 1891. Title: "Home of Mrs. Related:  American History

ExplorePAHistory.com cambodia_ta-prohm-temple.jpg from nationalgeographic.com BioLite Interactives archive: Flight Anatomy of ConcordeOn this detailed cross section, examine the features that enabled it to fly faster than sound. Anatomy of a JetlinerLook under the floorboards, above the ceiling, and inside the wings at a jet's sophisticated internal systems. Antique AviationHear three pilots describe what it's like to fly pioneer aircraft. Built to FlyCompare the anatomy of the oldest known bird and its dinosaur cousins. Colditz Glider, ThePOWs held within a Nazi prison secretly built an escape glider in an attic of the prison. Designing for StealthHow do you render a 15-ton hunk of flying metal nearly invisible to the enemy? Getting AirborneSend a plane down a runway at top speed and see how it achieves enough lift to take off. Imaging With RadarSee what synthetic aperture radar can see with this picture of Washington, D.C., taken on a snowy winter's day. MiG vs. Outfitting a Fighter PilotA pilot's gear is a sophisticated support system that can save his life in deadly situations.

This Hammock Tent Is Like a Swanky Hanging Three Bedroom Apartment Little Known Facts About Slavery Who Sold Whom? To quote once again the words of freed slave Ottobah Cugoano, who was writing in the late 18th century, we find the answer: "But I my own, to the shame of my own countrymen, that I was first kidnapped and betrayed by my own complexion, who were the first cause of my exile and slavery ; but if there were no buyers there would be no sellers." Sins of The Fathers: A Study of the Atlantic Traders 1441-1807", by James Pope-Hennessey, p. 174-5. The Other reasons for African slavery were, as we know, a certain number of anti-social crimes, such as adultery or theft. The Confusing Origin of Lynch Laws Further, it will appear later, the death penalty was not at first infliced under lynch-law; originally, lynching was synonymous with whipping. A general idea of the history of lynch-law in the United States is obtained by noting the definition of the term have appeared form time to time in the dictionaries. Ibid., p.40. Dehumanization of Women and the Life of the Enslaved Child p.59.