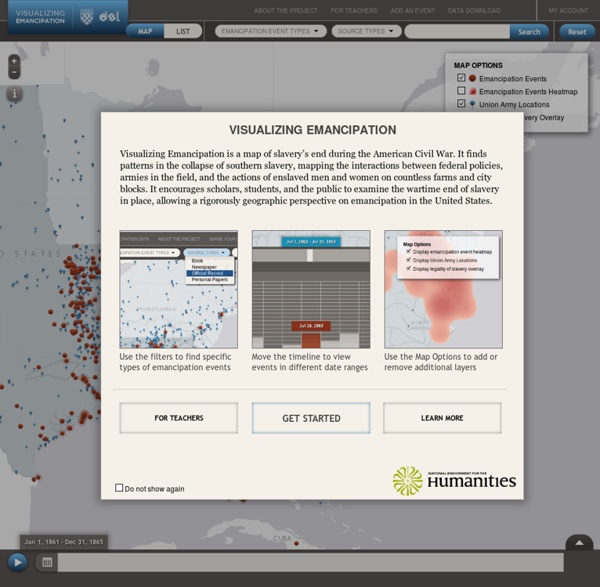 Hidden Patterns of the Civil War "Hidden Patterns of the Civil War" collects a number of interrelated projects on the sectional crisis, slavery, and emancipation during the Civil War era, with a particular emphasis on the histories of the city of Richmond and the state of Virginia. Grouped as "texts" and "maps," these projects use digital tools and digital media to uncover and represent patterns that are not easy to find when we look at particular pieces of evidence in isolation and only become evident when we visualize a wealth of evidence in graphs, maps, and models. Revealing patterns in text and across time and space, many of these visualizations are intriguing and surprising, offering us new insights into this dramatic era of intense social, political, and military conflict. Text Mining the Dispatch This project explores and analyzes the topics that dominated the local news in Richmond during the Civil War. Proceedings of the Virginia Secession Convention Daily Dispatch TextMapping Maps Visualizing Emancipation

Event visualization in a 3D environment Semantic event tracker (SET) is an interactive visualization tool for analyzing events (activities) in a three-dimensional environment. We model an event as an object that describes an action, its location, time, and relations to other objects. Real world event information is extracted from Internet sources, then stored and processed using Semantic Web technologies that enable us to discover semantic associations between events. We use RDF graphs to represent semantic metadata and ontologies. SET is capable of visualizing as well as navigating through the event data in all three aspects of space, time and theme. Temporal data is illustrated as a 3D multi-line in the 3D environment that connects consecutive events. The Best Sites For Learning About Pearl Harbor With Pearl Harbor Remembrance Day coming up tomorrow, December 7th, I thought I’d put together a quick “The Best…” list of useful resources. I know it’s a bit late, but at least you can use it for planning next year. Here are my picks, not in order of preference, of The Best Sites For Learning About Pearl Harbor (and that are accessible to English Language Learners): EL Civics has A Pearl Harbor Day Lesson, including online resources and reproducible hand-outs. Holt, Rinehart & Winston have a Pearl Harbor Interactive. Scholastic has another interactive on the Pearl Harbor attack. This is a very accessible Thinkquest site developed by students about Pearl Harbor. Learn About Pearl Harbor comes from Pearson. The National Park Service has many good photos of the Arizona Memorial and ones that were taken on the day of the attack. TIME Magazine has a photographic timeline of the event. How Stuff Works has a series of online videos about Pearl Harbor and its aftermath. As always, feedback is welcome.

Abraham Lincoln's Crossroads About the Exhibit: Abraham Lincoln’s Crossroads is an educational game based on the traveling exhibition Lincoln: The Constitution & the Civil War, which debuted at the National Constitution Center in June 2005. The online game is intended for advanced middle- and high-school students. It invites them to learn about Lincoln’s leadership by exploring the political choices he made. An animated Lincoln introduces a situation, asks for advice and prompts players to decide the issue for themselves, before learning the actual outcome. At the end of the game, players discover how frequently they predicted Lincoln’s actions.

Wizualizacja (grafika komputerowa) - Wikipedia, wolna encyklopedia See also Information graphics Visualization or visualisation is any technique for creating images, diagrams, or animations to communicate a message. Visualization through visual imagery has been an effective way to communicate both abstract and concrete ideas since the dawn of man. Examples from history include cave paintings, Egyptian hieroglyphs, Greek geometry, and Leonardo da Vinci's revolutionary methods of technical drawing for engineering and scientific purposes. Visualization today has ever-expanding applications in science, education, engineering (e.g., product visualization), interactive multimedia, medicine, etc. Typical of a visualization application is the field of computer graphics. Charles Minard's information graphic of Napoleon's march Computer graphics has from its beginning been used to study scientific problems. Scientific visualization is usually done with specialized software, though there are a few exceptions, noted below.

Does Visualization Really Work? Here’s Evidence That It Does Do you remember a scene in The Matrix when Neo opens his eyes and says “I know Kung Fu”? I bet you wished you could learn that fast. I know I did. I have wonderful news for you. You can become an expert in a similar way, just not as fast, by using the power of your mind. What is Visualization? In laymen’s terms, it means recreating all the images, sounds and feelings in your mind surrounding an activity in order to practice in a perfect environment. It may sound hard, but let me prove to you that you can do it. Were you able to imagine the cup of coffee? Don’t worry if you didn’t catch all the details, just like any other skill, you need to practice. Some Proof That This Technique Works This example has been used to death because it proves visualization works time and time again. Australian Psychologist Alan Richardson made a little experiment. The results were astounding. Another great example comes from one of my favorite artists. How to Use Visualization On Route to Expert Status img

Korzystanie infografiki wychowywać świat o Praw Człowieka As individuals, we may disagree on many issues, from philosophy to politics, to what constitutes proper nutrition. But if there is one topic everyone recognizes as tremendously important, it’s that everyone is entitled to basic human rights. One of the biggest challenges to getting people the rights they deserve as human beings, however, is awareness. 1. 2. 3. 4. Another reason is sexual abuse. 6. 7. 8. 9. 10. 11. 12. As human beings, we all have basic rights that we deserve. Drew Skau is Visualization Architect at Visual.ly, and a PhD Computer Science Visualization student at UNCC, with an undergraduate degree in Architecture. To complete the subscription process and receive your ebook, please click the link in the email we just sent you. Download our exclusive eBook to learn how to make your content work harder.

Visualizing Emancipation is a comprehensive map and timeline illustrating the slow decline of slavery in the United States. It provides quick access to thousands of primary source documents in connection with this timeline. by nda_librarian May 5