Abraham Lincoln Papers at the Library of Congress 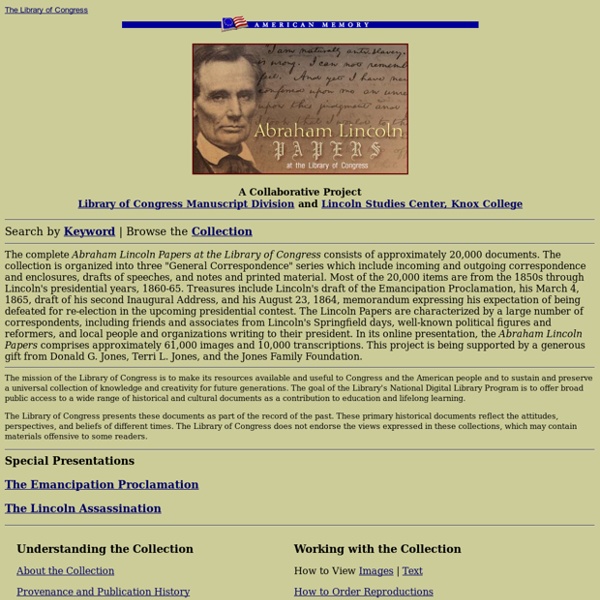 Digital Classroom | Home Welcome to one of the largest online collections of primary sources and historical periodicals about the women's suffrage movement. This learning module investigates how the suffragists embraced the First Amendment as a tool to help achieve their goal. From the early national conferences to the founding of publications dedicated to women's rights, suffragists exercised all five freedoms and pioneered new forms of dramatic protest. As you explore, you'll develop a deeper understanding of the women's suffrage movement that goes beyond the famous names and iconic images to reveal the roots of today's social and political movements. This site includes: There's more to see and do!

Unbreakable: Remembering the Code Talkers Navajo Code Talkers Henry Bake and George Kirk, 12/1943 (ARC 593415) Keith Hill passed away yesterday at the age of 87. He was president of the Navajo Code Talkers Association and Congressional Silver Medal recipient. At 17, he joined the Navajo Code Talkers, a group of men who used their Native American language to communicate and coordinate the movements of Marines in the Pacific Theater during World War II. Hill started with the U .S. Marine Corps in December of 1943, and he fought at the Marshall Islands, Sai Pan, and Iwo Jima. Encryption could be a complicated and time-consuming task. Philip Johnston, the son of a missionary, had presented the idea of Navajo speakers to the Marines. Why Navajos? But after a demonstration on February 28, 1942, General Vogel wrote to the U.S. The initial recruits came up with the code, creating a vocabulary for military terms. They created a system that signified the 26 letters of the English alphabet. Capt. First 29 Navajo U.S.

Women's History Month: Six Lesson Plan Resources for Teachers March is Women’s History Month, and International Women’s Day, March 8, is also a part of the celebration each year. For educators and students, the month provides a wonderful opportunity to explore and dig deeper into women’s contributions, struggles, and triumphs throughout history. A great place to start is the National Women’s History project, where students can explore this year’s theme, “Nevertheless, She Persisted: Honoring Women Who Fight All Forms of Discrimination Against Women.” Teachers will find some great resources for incorporating women’s history into lessons this month and beyond, as well as for exploring gender roles and stereotypes with students. TeachingHistory.org’s Women’s History Resources: This is a one-stop shop for diving deep into Women’s History Month. Educators will find learning resources, lesson plans, and a long list of quizzes and printables for the classroom. Discussing Gender Roles and Stereotypes in Class

The Civil War Collection at Penn State Penn State Collections Peoples Contest: A Civil War Era Digital Archiving Project - The project website features a growing number of digital collections from the Penn State special collections as well as state wide archives and regional historical societies. The project aims to advance scholarship on the experiences of the northern homefront during the civil war era, beginning in 1851 with Pennsylvanians' resistance to the Fugitive Slave Act and ending in 1874 with the revision of the state constitution. James T. PA Civil War Regimental Histories - The full-text of accounts from the collections of the Pennsylvania State Library. PA Civil War Era Newspapers - This collection contains all words, photographs, and advertisements from selected newspapers published during the pivotal years before, during, and after the U.S. PA History Journals - These journals publish scholarship on state, local, and regional history: Other Open Access Collections Smeed, E.C. The Pennsylvania State Library

History vs. Richard Nixon - Alex Gendler | TED-Ed Special thanks to Stanley Kutler. There is plenty more to understand about Richard M. Nixon. Here is a link to the Nixon Library where you can find out about his childhood, family, and post-presidency. Still interested in who Richard Nixon really was and where he came from? Take a closer look at Nixon’s often-overlooked accomplishments and environmental initiatives, as well as an explanation of his actions and the context in which they occurred. But don’t forget about the seriousness of the Watergate crimes, the terrible legacy of the Chilean coup, and what recently declassified tapes reveal about his campaign’s interference in the Vietnam peace efforts.

27 Presentation Software & Powerpoint Alternatives For 2015 At CustomShow, we like to think that everyone can use our presentation software to create better looking presentations, thus serving as a great powerpoint alternative to people. But that won’t always be the case. We cater to businesses greater than 10 employees and organizations that need an all-in-one presentation program. We also don’t usually promote our competitors. Presentation software is great, but we know there are plenty of options to choose from. CustomShow – Business Presentation Software Summary – Customshow is a presentation software program used mainly for businesses and companies with more than 25 employees. Disadvantages – More data intelligence could be added to their analytics platform Perfect For – Sales Professionals, Marketing Professionals, CEO’s, Design Agencies Website: www.customshow.com ClearSlide (SlideRocket) Summary – Clearslide purchased Sliderocket several years ago. Perfect For – Sales & Marketing Organizations Prezi Slideshark Haiku Deck SlideDog Slide Bureau