Education and Outreach - The National Archives 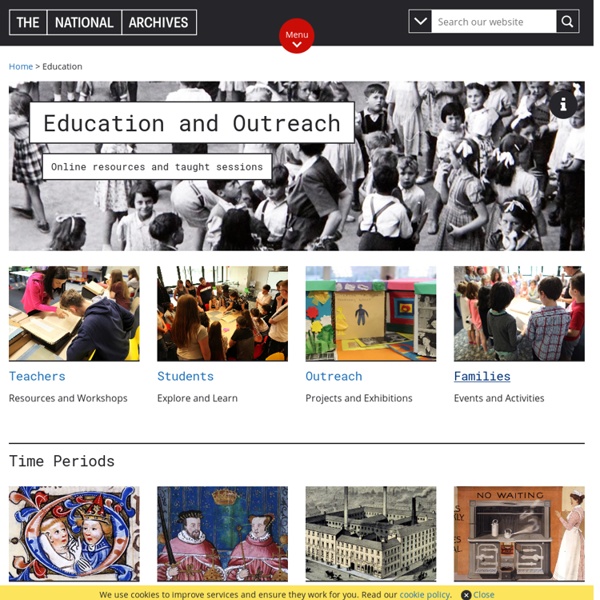 Kronstadt Uprising – Seventeen Moments in Soviet History Texts Images Video Other Resources Subject essay: James von Geldern The naval base of Kronstadt lies on Kotlin Island near the head of the Gulf of Finland. Peter the Great captured the island from the Swedes in 1703 and built it into a naval fortress to protect his new capital. The concentration of heavy armory and sailors on the small island made it a bulwark against foreign invasion, but also a tinderbox in times of internal unrest. During the stormy years 1905-1906 several mutinies broke out on Kronstadt.

Internet History Sourcebooks Internet Modern History Sourcebook The Internet Modern History Sourcebook now contains thousands of sources and the previous index pages were so large that they were crashing many browsers. See Introduction for an explanation of the Sourcebook's goals. Explanation of Sources of Material Here. See the Help! page for all the help on research I can offer. Crossword puzzle maker The Crossword puzzle maker is used to make simple crossword puzzles. It turns out that good crossword puzzles of the type found in newspapers are fairly hard to generate, and require a pool of lots of words, not all of which are used. This program puts all of the words you specify (no more, no less) into a simple crossword puzzle. ICT in the Curriculum 2012 - ICT in the Curriculum 2012 Can't say the NSA/PRISM security services surveillance controversy has got me very hot under the collar. Maybe its just that I struggle to get excited about Big Brother-esque snooping, when privacy is something of a redundant concept these days - CCTV is everywhere in the UK, even in Welsh forests! You are being watched! Though phone tapping is another issue, I have always taken it for granted that electronic communication is a public forum. Though I must admit I have broken my own rule a few times in the heat of the moment, I would never send an email or put a post on Twitter or Facebook that I wouldn't be happy for the whole world to see (including MI5 and Mr Gove).

Revisiting Hitler, in a New Authoritarian Age In a 2018 volume of the German Yearbook of Contemporary History devoted to new research on Hitler, the editors Elizabeth Harvey and Johannes Hürter identified a recent “Hitler boom,” an unexpected increase in German research into Hitler beginning around 2013. But they’re wary of ascribing that upswing to public concerns. Academics, Harvey said, are largely not responding to “the worrying upsurge today of right-wing extremism, anti-Semitism, racism, right-wing populism, extremist leader figures” by thinking, “Right, I’m going to go write a better biography of Hitler to cure that.” Indeed, professional historians are wary of drawing too many parallels between Hitler and authoritarian-minded present-day leaders. “History,” Matthäus said, “is probably more complex than these analogies would like to have it.” Simms shares that view.

Combat Stress? There's an App for That Check this out. The Pentagon’s effort to help troops manage the emotional strains of combat took another step into the 21st Century today with the rollout of the T2 Mood Tracker smartphone app. Developed by the DoD’s National Center for Telehealth and Technology, nicknamed T2, the app lets troops and loved ones record and monitor their emotional reactions to everything from combat to post-combat therapy and even the highs and lows of everyday life at home. All of this has the potential to help therapists diagnose and treat stress related problems, according to a release put out today by the center. “Therapists and physicians often have to rely on patient recall when trying to gather information about symptoms over the previous weeks or months. Research has shown that information collected after the fact, especially about mood, tends to be inaccurate.” said Dr.

Rapid Electronics - Educational Products Rapid’s competitively priced educational supplies, teaching equipment and learning resources are curriculum-linked and available for same day despatch. The educational products stocked by Rapid cover subjects including literacy, maths, science, design and technology, food technology, outdoor play, PSHE and much more. From musical instruments and school lab equipment to electronic project kits and exercise books, Rapid Online stock high quality resources for all teaching levels: primary, secondary, college and university, from Foundation Stage to Key Stage 1, 2, 3 and 4. If you cannot see the educational supplies you need, we may be able to source them for you.

WikiPrimaryHistory? This page began life as a rather tongue in cheek response to the new English National Curriculum for History, published for consultation on 7th February 2013. The sustained focus in the key stage one and two programmes of study on factual knowledge to be acquired has caused something of stir amongst teachers, teacher educators and academics. The thinking behind the approach can be found in this recent speech.