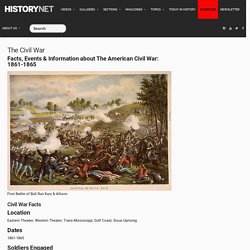 The Civil War. A Brief Overview of the American Civil War. Abraham Lincoln (National Archives) The Civil War is the central event in America's historical consciousness. 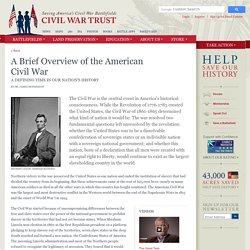 While the Revolution of 1776-1783 created the United States, the Civil War of 1861-1865 determined what kind of nation it would be. The war resolved two fundamental questions left unresolved by the revolution: whether the United States was to be a dissolvable confederation of sovereign states or an indivisible nation with a sovereign national government; and whether this nation, born of a declaration that all men were created with an equal right to liberty, would continue to exist as the largest slaveholding country in the world. Northern victory in the war preserved the United States as one nation and ended the institution of slavery that had divided the country from its beginning.

But these achievements came at the cost of 625,000 lives--nearly as many American soldiers as died in all the other wars in which this country has fought combined. U.S. Civil War 1861-1865. Jump To: Fort Sumter Attacked - First Bull Run - Shiloh - Second Bull Run - Antietam - Fredericksburg - Chancellorsville - Gettysburg - Chickamauga - Chattanooga - Cold Harbor - March to the Sea - Lee Surrenders - Lincoln Shot November 6, 1860 - Abraham Lincoln, who had declared "Government cannot endure permanently half slave, half free... 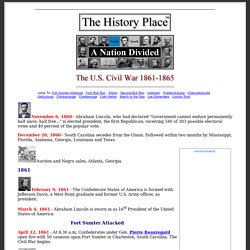 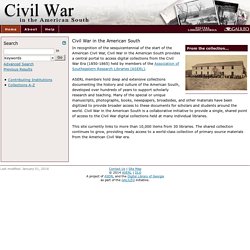 ASERL members hold deep and extensive collections documenting the history and culture of the American South, developed over hundreds of years to support scholarly research and teaching. Many of the special or unique manuscripts, photographs, books, newspapers, broadsides, and other materials have been digitized to provide broader access to these documents for scholars and students around the world. Civil War in the American South is a collaborative initiative to provide a single, shared point of access to the Civil War digital collections held at many individual libraries. 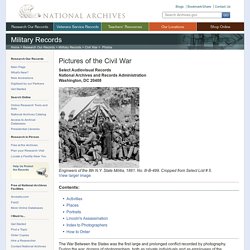 State Militia, 1861. No. Ill-B-499. Cropped from Select List # 5.View larger image Contents: The War Between the States was the first large and prolonged conflict recorded by photography. The name Mathew B. The pictures listed in this publication are in the Still Picture Branch of the National Archives and Records Administration (NARA). Photographs included in this leaflet have been listed under one of four main headings: activities, places, portraits, and Lincoln's assassination. At the end of this leaflet, there are instructions for ordering photographs. Sandra Nickles and Joe D. Activities Army Life 1. 2. 3. 4. Army Units. About the War. The Civil War was fought in 10,000 places, from Valverde, New Mexico, and Tullahoma, Tennessee, to St. 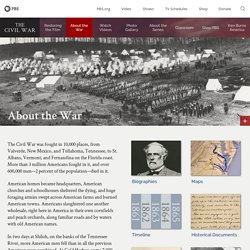 Albans, Vermont, and Fernandina on the Florida coast. More than 3 million Americans fought in it, and over 600,000 men—2 percent of the population—died in it. American homes became headquarters, American churches and schoolhouses sheltered the dying, and huge foraging armies swept across American farms and burned American towns. Americans slaughtered one another wholesale, right here in America in their own cornfields and peach orchards, along familiar roads and by waters with old American names. 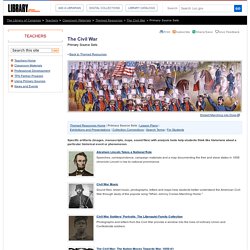 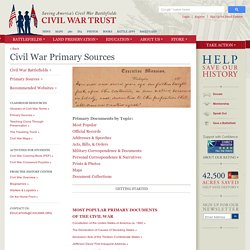 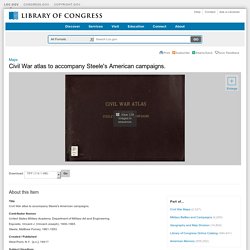 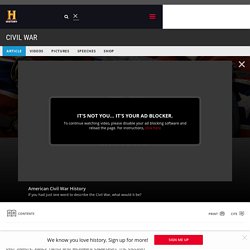 In the North, manufacturing and industry was well established, and agriculture was mostly limited to small-scale farms, while the South’s economy was based on a system of large-scale farming that depended on the labor of black slaves to grow certain crops, especially cotton and tobacco. Growing abolitionist sentiment in the North after the 1830s and northern opposition to slavery’s extension into the new western territories led many southerners to fear that the existence of slavery in america—and thus the backbone of their economy—was in danger. In 1854, the U.S. Congress passed the Kansas-Nebraska Act, which essentially opened all new territories to slavery by asserting the rule of popular sovereignty over congressional edict.