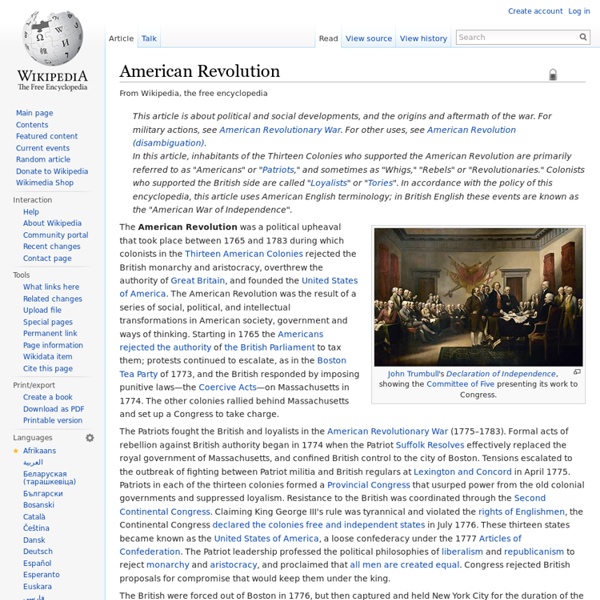 The American Revolution was a political upheaval that took place between 1765 and 1783 during which colonists in the Thirteen American Colonies rejected the British monarchy and aristocracy, overthrew the authority of Great Britain, and founded the United States of America. The American Revolution was the result of a series of social, political, and intellectual transformations in American society, government and ways of thinking. Starting in 1765 the Americans rejected the authority of the British Parliament to tax them; protests continued to escalate, as in the Boston Tea Party of 1773, and the British responded by imposing punitive laws—the Coercive Acts—on Massachusetts in 1774. The other colonies rallied behind Massachusetts and set up a Congress to take charge. The Patriots fought the British and loyalists in the American Revolutionary War (1775–1783). Origins Background to 1763 The British began colonizing North America in the 17th century. 1764–1766: Taxes imposed and withdrawn Related:  Mes centres ,, • The problems with philosophy • -

Chasing that pension file | The Legal Genealogist The missing pension Most folks whose families have been in America since oh-dark-thirty — defined roughly by The Legal Genealogist as after the Mayflower but before the Revolution — ended up with one or more ancestors involved in one or more of America’s early wars. The Legal Genealogist is no exception. My 3rd great grandfather Jesse Fore was a fifer in Captain Michael Gaffney’s company of South Carolina Militia. Now I’ve seen some of the pension files for the War of 1812. I’ve sat in the National Archives and held Jesse Fore’s file in my hands. In the case of the Elijahs, it’s pretty easy to understand why Elijah Sr. never got a pension for his 1812 service: he died before May 1818, when James was named executor of his will. It dawned on me, finally, that I didn’t really have a very good handle on just who could get a pension for serving in the War of 1812 and when. Duh. And there was my answer. You’d think by now I’d have learned, right? Check the laws.

Scottish Enlightenment The Scottish Enlightenment (Scots: Scots Enlichtenment, Scottish Gaelic: Soillseachadh na h-Alba) was the period in 18th- and early-19th-century Scotland characterised by an outpouring of intellectual and scientific accomplishments. By the eighteenth century, Scotland had a network of parish schools in the Lowlands and four universities. The Enlightenment culture was based on close readings of new books, and intense discussions took place daily at such intellectual gathering places in Edinburgh as The Select Society and, later, The Poker Club, as well as within Scotland's ancient universities (St Andrews, Aberdeen, Glasgow, and Edinburgh).[1][2] Sharing the humanist and rationalist outlook of the European Enlightenment of the same time period, the thinkers of the Scottish Enlightenment asserted the importance of human reason combined with a rejection of any authority that could not be justified by reason. Background[edit] Economic growth[edit] Education system[edit] Literature[edit]

Founding Fathers of the United States Group of Americans who led the revolution against Great Britain The Founding Fathers of the United States, or simply the Founding Fathers, were a group of American leaders who united the Thirteen Colonies, led the war for independence from Great Britain, and built a frame of government for the new United States of America upon republican principles during the latter decades of the 18th century. The group came from a variety of social, economic, and ethnic backgrounds as well as occupations, some with no prior political experience. The phrase "Founding Fathers" is a 20th-century appellation, coined by Warren G. Harding in 1916.[11] Background[edit] The Albany Congress of 1754 was a conference attended by seven colonies, which presaged later efforts at cooperation. Social background and commonalities[edit] Benjamin Franklin, an early advocate of colonial unity, was a foundational figure in defining the USethos and exemplified the emerging nation's ideals. Education[edit] Colleges attended[edit]

Egalitarianism Trend of thought that favors equality for all people Egalitarianism (from French égal, meaning 'equal'), or equalitarianism,[1][2] is a school of thought within political philosophy that prioritizes equality for all people.[3] Egalitarian doctrines are generally characterized by the idea that all humans are equal in fundamental worth or moral status.[4] According to the Merriam-Webster Dictionary, the term has two distinct definitions in modern English,[5] namely either as a political doctrine that all people should be treated as equals and have the same political, economic, social and civil rights,[6] or as a social philosophy advocating the removal of economic inequalities among people, economic egalitarianism, or the decentralization of power. Some sources define egalitarianism as the point of view that equality reflects the natural state of humanity.[7][8][9] Forms[edit] Legal egalitarianism[edit] Equality of person[edit] Equality of men and women in rights and responsibilities[edit]

The ALJs | The Legal Genealogist Administrative law judges So last week The Legal Genealogist took on the question of the Magistrate Judge — that federal judicial officer appointed by the trial judges of each United States District Court to assist them in carrying out their responsibilities. And that prompted my friend Craig to ask about another kind of judge. “So, where do administrative judges fit into the system?” he asked, noting that he had the impression that “they were also part of the District Court System.” Good question, and one that a lot of genealogists may encounter when dealing with their families’ post-World War II encounters with the federal government. The fact is, administrative law judges are not exactly judges at all, in the sense of belonging to the Judicial Branch of government. Administrative agencies, both at the federal and state levels, have a lot of authority in two different areas. And that internal decision-making is called the agency’s adjudicative authority.