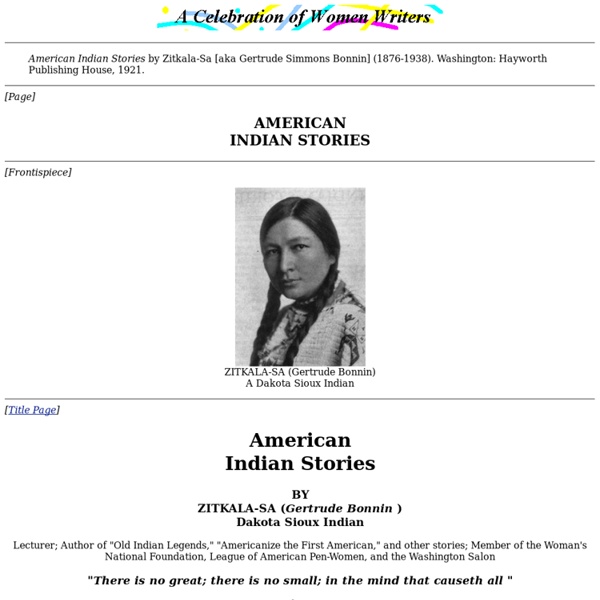 American Indian Stories by Zitkala-Sa [aka Gertrude Simmons Bonnin] (1876-1938). Washington: Hayworth Publishing House, 1921. [Page] [Frontispiece] ZITKALA-SA (Gertrude Bonnin)A Dakota Sioux Indian [Title Page] BY ZITKALA-SA (Gertrude Bonnin ) Dakota Sioux Indian Lecturer; Author of "Old Indian Legends," "Americanize the First American," and other stories; Member of the Woman's National Foundation, League of American Pen-Women, and the Washington Salon "There is no great; there is no small; in the mind that causeth all " WashingtonHayworth Publishing House1921 [Page] Impressions of an Indian Childhood A WIGWAM of weather-stained canvas stood at the base of some irregularly ascending hills. Here, morning, noon, and evening, my mother came to draw water from the muddy stream for our household use. "Hush; my little daughter must never talk about my tears"; and smiling through them, she patted my head and said, "Now let me see how fast you can run today." I was a wild little girl of seven. So! "How! Related:  Native American Women

Contrasting Values Attitudes and Behaviors Talking for the sake of talking is discouraged. In days past in their own society, Indians found it unnecessary to say hello, good-bye, how are you, and so on. Even today, many Indians find this type of small talk unimportant. In social interactions, Indians emphasize the feeling or emotional component rather than the verbal. Educational Considerations The difference in the degree of verbosity may create a situation in which the Indian does not have a chance to talk at all.

Zitkala-Sa, "The School Days of an Indian Girl." Zitkala-Sa (Gertrude Bonnin). "The School Days of an Indian Girl." The Online Archive of Nineteenth-Century U.S. There were eight in our party of bronzed children who were going East with the missionaries. We had been very impatient to start on our journey to the Red Apple Country, which, we were told, lay a little beyond the great circular horizon of the Western prairie. On the train, fair women, with tottering babies on each arm, stopped their haste and scrutinized the children of absent mothers. I sank deep into the corner of my seat, for I resented being watched. I sat perfectly still, with my eyes downcast, daring only now and then to shoot long glances around me. In this way I had forgotten my uncomfortable surroundings, when I heard one of my comrades call out my name. Though we rode several days inside of the iron horse, I do not recall a single thing about our luncheons. It was night when we reached the school grounds. Entering the house, I stood close against the wall.

Astonishing new photos of uncontacted tribe UPDATE: 4 February An extraordinary new film of the tribe in these pictures has been released. It is the first aerial footage of any uncontacted community. Watch now » New photos obtained by Survival International show uncontacted Indians in never-seen-before detail. The pictures were taken by Brazil’s Indian Affairs Department, which has authorized Survival to use them as part of its campaign to protect their territory. The tribe’s survival is in serious jeopardy as an influx of illegal loggers invades the Peru side of the border. Machete This uncontacted tribe is likely to be descended from Indians who escaped the atrocities of the rubber boom last century. Metal pan Like the machete, the metal pan was likely acquired through inter-tribal trading networks. Peeled manioc Manioc (also known as cassava) is a tuber cultivated by many tribes in South America and is a staple part of their diet, providing starch. Unpeeled manioc Bananas Papaya Red body paint Palm fronds Basket and carrying strap No.

Lojong Lojong (Tib. བློ་སྦྱོང་,Wylie: blo sbyong) is a mind training practice in the Tibetan Buddhist tradition based on a set of aphorisms formulated in Tibet in the 12th century by Geshe Chekhawa. The practice involves refining and purifying one's motivations and attitudes. The fifty-nine or so slogans that form the root text of the mind training practice are designed as a set of antidotes to undesired mental habits that cause suffering. They contain both methods to expand one's viewpoint towards absolute bodhicitta, such as "Find the consciousness you had before you were born" and "Treat everything you perceive as a dream", and methods for relating to the world in a more constructive way with relative bodhicitta, such as "Be grateful to everyone" and "When everything goes wrong, treat disaster as a way to wake up." History of the practice[edit] Atiśa journeyed to Sumatra and studied with Dharmarakṣita for twelve years. Geshe Chekhawa is claimed to have cured leprosy with mind training. 1. 2.

Hoefel, Roseanne. " Zitkala-Sa: A Biography." Hoefel, Roseanne. "Zitkala-Sa: A Biography." The Online Archive of Nineteenth-Century U.S. Women's Writings. A Biography: By Roseanne Hoefel A vital link between the oral cultures of tribal America and the literate culture of contemporary American Indians, Gertrude Bonnin was the third child of Ellen Tate 'I yohiwin Simmons, a full-blood Yankton Sioux. As with many uprooted children, Zitkala-Sa returned after three years to a heightened tension with her mother and ambivalence regarding her heritage. Four years later, Zitkala-Sa re-entered school, graduated on to Earlham College to become a teacher, remaining socially reclusive even after congratulatory gestures by schoolmates when she won oratory contests. Later, Zitkala-Sa taught at CIIS in Pennsylvania, founded by Colonel Richard Pratt in 1879 to "save" Indians from white abuse and destruction by assimilating them and teaching them a trade. Zitkala-Sa was a controversial activist, as illustrated by her political record. Hafen, P.

Native American Code Of Ethics | Saved by Slow Death I recently found these Native American code of ethics - I am unsure of where this originated and of it’s accuracy. Regardless of where it originated, I like it and I wanted to pass it on. So much common sense, a great respect for the earth and everything that calls it home. I’m a big nature and animal lover so of course I’m posting it. No Native American culture was perfect, but the Europeans could have learned from them. Native American Code Of Ethics Rise with the sun to pray. Thanks for visiting! Comments containing racism & ignorance will NOT be approved, there is no room for that here. Tags: America, American, American Indian, culture, dignity, earth, ethics, honor, human interest, Indigenous, indigenous people, love, Native American, nature, positive psychology, respect, social philosophy, spirituality

free buddhist audio : free mp3s and texts on buddhism, meditation and the arts Gertrude Simmons Bonnin : Voices From the Gaps : University of Minnesota Home > Artist Pages : Gertrude Simmons Bonnin Biography / Criticism Gertrude Simmons Bonnin, Zitkala-sa (Red Bird), was an extraordinarily talented and educated Native American woman who struggled and triumphed in a time when severe prejudice prevailed toward Native American culture and women. Her talents and contributions in the worlds of literature, music, and politics challenge long-standing beliefs that the white man's culture is good, and Native Americans are sinful savages. Bonnin aimed at creating understanding between the dominant white and Native American cultures. As a woman of mixed white and Native American ancestry, she embodied the need for the two cultures to live cooperatively within the same body of land. Bonnin was born in 1876, on the Pine Ridge Reservation in South Dakota. Though most noted for her literary and political genius, Bonnin was also an accomplished violinist and even won a scholarship to study at the Boston Conservatory of Music. Bonnin died in 1938.

Registering your kit – 23andMe Customer Care Before you submit your sample, you need to register your kit into a 23andMe account. In order to register, you will need to either create a new account or log in to an existing 23andMe account. If you are creating an account at this time, you will be required to confirm your email address and set your account password and security question before you can proceed with registering your kit. To begin registration, navigate to to Important: Information entered during registration is only saved within your account once registration is completed. If you exit the process before completing registration, you will need to restart from the barcode entry step. Barcode & Profile | Terms of Service & Consents | Review & Submission Barcode entry and Profile selection The 14-digit barcode is located on the side of the collection tube included in your kit. Give us feedback In most instances, the individual registering should select "I will be using this kit."