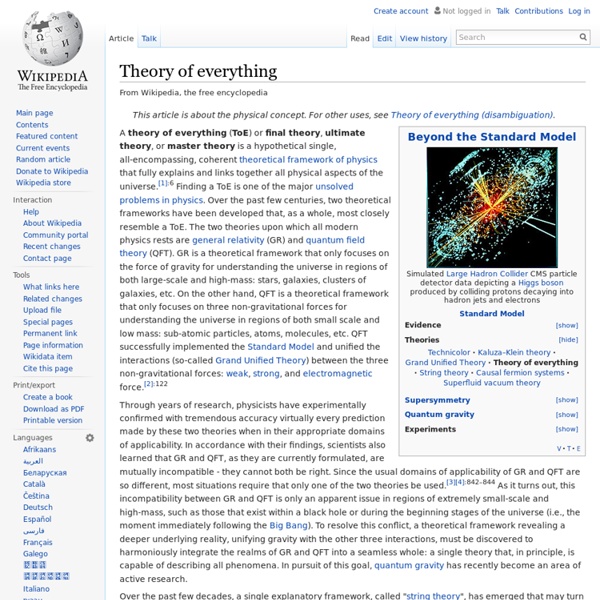 A theory of everything (ToE) or final theory, ultimate theory, or master theory is a hypothetical single, all-encompassing, coherent theoretical framework of physics that fully explains and links together all physical aspects of the universe.[1]:6 Finding a ToE is one of the major unsolved problems in physics. Over the past few centuries, two theoretical frameworks have been developed that, as a whole, most closely resemble a ToE. The two theories upon which all modern physics rests are general relativity (GR) and quantum field theory (QFT). GR is a theoretical framework that only focuses on the force of gravity for understanding the universe in regions of both large-scale and high-mass: stars, galaxies, clusters of galaxies, etc. Through years of research, physicists have experimentally confirmed with tremendous accuracy virtually every prediction made by these two theories when in their appropriate domains of applicability. Historical antecedents[edit] Modern physics[edit] [edit] Related:  the theory of everything

Timeline of the universe | Science Using observatories on the earth and in space, astronomers have been able to study the nature of the cosmos in unprecedented detail. By analysing the motion of distant galaxies, they have discovered that the whole cosmos is expanding under the influence of forces unleashed at its birth in the big bang. Combined with studies of the radiation left over from that primordial explosion, they have found that the universe was born 13.7bn years ago, give or take 200m years. Pinning down the date of creation with such precision is impressive, but scientists have gone much further. 10^-43 seconds Known as the Planck Era, this is the closest that current physics can get to the absolute beginning of time. 10^-35 seconds The so-called Grand Unification Era, at the end of which the superforce begins to break apart into the constituent forces we see today. 10^-32 seconds 10^-11 seconds 10^-6 seconds 200 seconds 300,000 years 200m years 0.5bn - 1bn years 9bn years 9.1bn years

Vacuum energy Vacuum energy is an underlying background energy that exists in space throughout the entire Universe. One contribution to the vacuum energy may be from virtual particles which are thought to be particle pairs that blink into existence and then annihilate in a timespan too short to observe. They are expected to do this everywhere, throughout the Universe. Their behavior is codified in Heisenberg's energy–time uncertainty principle. Still, the exact effect of such fleeting bits of energy is difficult to quantify. The effects of vacuum energy can be experimentally observed in various phenomena such as spontaneous emission, the Casimir effect and the Lamb shift, and are thought to influence the behavior of the Universe on cosmological scales. Origin[edit] Summing over all possible oscillators at all points in space gives an infinite quantity. Additional contributions to the vacuum energy come from spontaneous symmetry breaking in quantum field theory. Implications[edit] [citation needed]

Google, democracy and the truth about internet search | Technology Here’s what you don’t want to do late on a Sunday night. You do not want to type seven letters into Google. That’s all I did. I typed: “a-r-e”. And then “j-e-w-s”. Are Jews evil? Google is search. The sixth is from Yahoo Answers: “Why are Jews so evil?” There’s one result in the 10 that offers a different point of view. I feel like I’ve fallen down a wormhole, entered some parallel universe where black is white, and good is bad. Stories about fake news on Facebook have dominated certain sections of the press for weeks following the American presidential election, but arguably this is even more powerful, more insidious. He came across a similar instance in 2006 when, “If you typed ‘Jew’ in Google, the first result was jewwatch.org. Google is knowledge. Next I type: “a-r-e m-u-s-l-i-m-s”. Jews are evil. A few days later, I talk to Danny Sullivan, the founding editor of SearchEngineLand.com. He’s surprised too. Google isn’t just a search engine, of course. Like a cancer? “Look at that.

Pigeonhole principle An image of pigeons in holes. Here there are n = 10 pigeons in m = 9 holes. Since 10 is greater than 9, the pigeonhole principle says that at least one hole has more than one pigeon. In mathematics, the pigeonhole principle states that if n items are put into m containers, with n > m, then at least one container must contain more than one item. This theorem is exemplified in real-life by truisms like "there must be at least two left gloves or two right gloves in a group of three gloves". It is an example of a counting argument, and despite seeming intuitive it can be used to demonstrate possibly unexpected results; for example, that two people in London have the same number of hairs on their heads (see below). The first formalization of the idea is believed to have been made by Peter Gustav Lejeune Dirichlet in 1834 under the name Schubfachprinzip ("drawer principle" or "shelf principle"). Examples[edit] Softball team[edit] Sock-picking[edit] Hand-shaking[edit] Hair-counting[edit]

Unveiling the Mystics of Sacred Geometry Sacred Geometry, how can I find the words to describe it? The need for us to speak about Sacred Geometry was dire but as usual the need to be thorough delayed it. So a week after googling “Sacred Geometry” and trolling through a lot of esoteric links, my mind is exploding with information. There is so much more to put in, but let me try compiling what I have watched and learnt and hopefully we shall present a decent overview on this subject. Let me start with the basic, what is sacred geometry? These same laws can be applied to produce visual harmony. Sacred geometric ratios applied to music gives it healing powers to harmonize a body that is out of balance. Nature itself has so much Sacred Geometry to display and in the video itself you would have heard, if you are open to it, its everywhere! From the center of a Sunflower Sacred Geometry can be seen all around us, here we can see it in the center of the Sunflower. Leonardo da vinci drew the Vitruvian man based on the work of Vitruvius.

Quantum gravity Quantum gravity (QG) is a field of theoretical physics that seeks to describe the force of gravity according to the principles of quantum mechanics. Although a quantum theory of gravity is needed in order to reconcile general relativity with the principles of quantum mechanics, difficulties arise when one attempts to apply the usual prescriptions of quantum field theory to the force of gravity.[3] From a technical point of view, the problem is that the theory one gets in this way is not renormalizable and therefore cannot be used to make meaningful physical predictions. As a result, theorists have taken up more radical approaches to the problem of quantum gravity, the most popular approaches being string theory and loop quantum gravity.[4] Strictly speaking, the aim of quantum gravity is only to describe the quantum behavior of the gravitational field and should not be confused with the objective of unifying all fundamental interactions into a single mathematical framework.

Quantum mechanics Description of physics at the atomic scale Wave functions of the electron in a hydrogen atom at different energy levels. Quantum mechanics cannot predict the exact location of a particle in space, only the probability of finding it at different locations.[1] The brighter areas represent a higher probability of finding the electron. Quantum mechanics is a fundamental theory in physics that provides a description of the physical properties of nature at the scale of atoms and subatomic particles.[2]: 1.1 It is the foundation of all quantum physics including quantum chemistry, quantum field theory, quantum technology, and quantum information science. Classical physics, the collection of theories that existed before the advent of quantum mechanics, describes many aspects of nature at an ordinary (macroscopic) scale, but is not sufficient for describing them at small (atomic and subatomic) scales. Overview and fundamental concepts Mathematical formulation . and represent the same physical system.