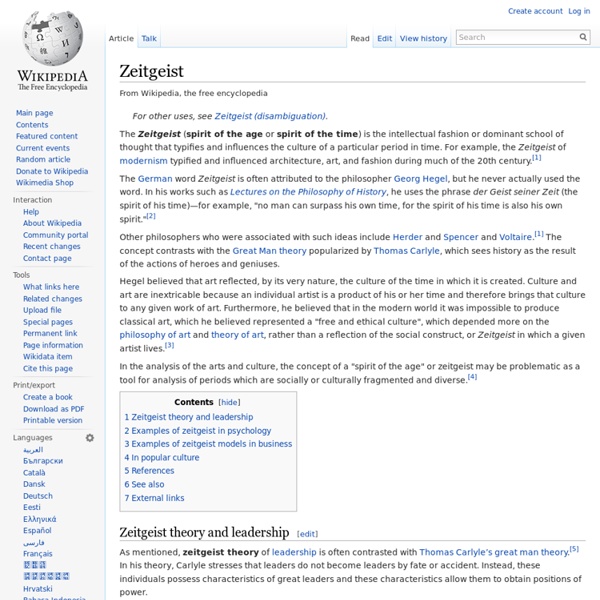 The Zeitgeist (spirit of the age or spirit of the time) is the intellectual fashion or dominant school of thought that typifies and influences the culture of a particular period in time. For example, the Zeitgeist of modernism typified and influenced architecture, art, and fashion during much of the 20th century.[1] The German word Zeitgeist is often attributed to the philosopher Georg Hegel, but he never actually used the word. In his works such as Lectures on the Philosophy of History, he uses the phrase der Geist seiner Zeit (the spirit of his time)—for example, "no man can surpass his own time, for the spirit of his time is also his own spirit."[2] Other philosophers who were associated with such ideas include Herder and Spencer and Voltaire.[1] The concept contrasts with the Great Man theory popularized by Thomas Carlyle, which sees history as the result of the actions of heroes and geniuses. Zeitgeist theory and leadership[edit] Examples of zeitgeist in psychology[edit] See also[edit]

Related:  Psychology • Words • Down the Rabbit Hole • Wikipedia A • Saved for later 3

Structuralism (psychology) Structuralism in psychology refers to a theory of consciousness developed by Wilhelm Wundt, and his mentee Edward B. Titchener that brought Wundt's idea to the United States. Depending on who you asked it will be said either of them formally began this field of psychology but it is certain that Titchener expanded on what Wundt originally provided, and was also responsible for bringing this idea to America. 20 Common Grammar Mistakes That (Almost) Everyone Gets Wrong I’ve edited a monthly magazine for more than six years, and it’s a job that’s come with more frustration than reward. If there’s one thing I am grateful for — and it sure isn’t the pay — it’s that my work has allowed endless time to hone my craft to Louis Skolnick levels of grammar geekery. As someone who slings red ink for a living, let me tell you: grammar is an ultra-micro component in the larger picture; it lies somewhere in the final steps of the editing trail; and as such it’s an overrated quasi-irrelevancy in the creative process, perpetuated into importance primarily by bitter nerds who accumulate tweed jackets and crippling inferiority complexes. But experience has also taught me that readers, for better or worse, will approach your work with a jaundiced eye and an itch to judge. While your grammar shouldn’t be a reflection of your creative powers or writing abilities, let’s face it — it usually is. Who and Whom

13 Estrogenic Ingredients in Consumer Products Estrogen is a naturally occuring element, one that is needed by the human body for basic functions like reproduction. While small amounts are critical to healthy human development, too much estrogen has been linked with many health problems including premature breast development (or breast development in men), PMS, endometriosis, fibroids, cancer and pregnancy complications among many other issues scientists are just discovering. For example, women undergoing estrogen-driven breast cancer are cautioned against eating foods containing Soy, but could the sources of estrogen in our environment have an even greater impact on our hormone health? The sources of estrogen continue to increase in our diet and environment, as many manufacturers infuse food products and supplements, even fabrics with phytoestrogens (plant material that contains estrogen or stimulates estrogen production).

Flapper A flapper onboard ship (1929) Flappers were a "new breed" of young Western women in the 1920s who wore short skirts, bobbed their hair, listened to jazz, and flaunted their disdain for what was then considered acceptable behavior. Flappers were seen as brash for wearing excessive makeup, drinking, treating sex in a casual manner, smoking, driving automobiles, and otherwise flouting social and sexual norms.[1] Flappers had their origins in the liberal period of the Roaring Twenties, the social, political turbulence and increased transatlantic cultural exchange that followed the end of World War I, as well as the export of American jazz culture to Europe.

Gestalt psychology Gestalt psychology or gestaltism (German: Gestalt – "shape or form") is a theory of mind of the Berlin School. The central principle of gestalt psychology is that the mind forms a global whole with self-organizing tendencies. This principle maintains that the human mind considers objects in their entirety before, or in parallel with, perception of their individual parts; suggesting the whole is other than the sum of its parts. The Truth About Estrogen And A Woman’s Body You are here: Home / Health / The Truth About Estrogen And A Woman’s Body Our modern world is saturated with excess estrogens. When your body has too much estrogen, you feel it. You can have any have low energy, mood swings, hot flashes, and belly fat. Your libido fades, you can’t sleep, and you become depressed.

Jazz Age The Jazz Age was a feature of the 1920s (ending with The Great Depression) when jazz music and dance became popular. This occurred particularly in the United States, but also in Britain, France and elsewhere. Jazz played a significant part in wider cultural changes during the period, and its influence on pop culture continued long afterwards. Jazz music originated mainly in New Orleans, and is/was a fusion of African and European music. The Jazz Age is often referred to in conjunction with the phenomenon referred to as the Roaring Twenties.

This edible water blob could replace plastic bottles What's one solution to the growing problem of plastic water bottle waste? A trio of Spanish design students think they have the answer, and it involves creating a "water bottle" that you can eat, reports Co.Exist. Designers Rodrigo García González, Guillaume Couche and Pierre Paslier call their creation "Ooho," a gelatinous blob that is actually a membrane that encapsulates water like a bladder. When you're thirsty, just puncture the membrane and drink. Or, if you also have an appetite, just pop a bite-sized Ooho in your mouth and chomp down for a burst of hydration. The gooey membrane, made from brown algae and calcium chloride, is edible, hygienic and biodegradable.

Wilhelm Wundt Wilhelm Maximilian Wundt (16 August 1832 – 31 August 1920) was a German physician, physiologist, philosopher, and professor, known today as one of the founding figures of modern psychology. Wundt, who noted psychology as a science apart from biology and philosophy, was the first person to ever call himself a Psychologist.[3] He is widely regarded as the "father of experimental psychology".[4][5] In 1879, Wundt founded the first formal laboratory for psychological research at the University of Leipzig. This marked psychology as an independent field of study.[6] By creating this laboratory he was able to explore the nature of religious beliefs, identify mental disorders and abnormal behavior, and find damaged parts of the brain. In doing so, he was able to establish psychology as a separate science from other topics. He also formed the first journal for psychological research in the year 1881.

List of English language idioms This is a list of notable idioms in the English language. An idiom is a common word or phrase with a culturally understood meaning that differs from what its composite words' denotations would suggest. For example, an English speaker would understand the phrase "kick the bucket" to mean "to die" – and also to actually kick a bucket. Estrogen Dominance and Mental Health Taken from his book Nutritional Medicine: Fact & Fiction Introduction by Christine Sutherland of the Lifeworks Group, Perth, Western Australia Since discovering the work of Safe Harbor, we began to arrive at a much greater appreciation of the medical causes or medical influences on mental disorders, or seeming mental disorders. We then commenced a search to locate a qualified medical practitioner with the depth and breadth of biochemical knowledge and applications which we required to assist us to provide the best possible care for our clients. We found Dr Igor Tabrizian, a general practitioner in Perth, Western Australia, specializing in nutritional investigation and treatment.

Mental breakdown Definition[edit] The terms "nervous breakdown" and "mental breakdown" have not been formally defined through a medical diagnostic system such as the DSM-IV or ICD-10, and are nearly absent from current scientific literature regarding mental illness.[1][2] Although "nervous breakdown" does not necessarily have a rigorous or static definition, surveys of laypersons suggest that the term refers to a specific acute time-limited reactive disorder, involving symptoms such as anxiety or depression, usually precipitated by external stressors.[1] Specific cases are sometimes described as a "breakdown" only after a person becomes unable to function in day-to-day life.[3]

Rent or Buy? The Math Is Changing Photo Billy Gasparino and Jenna Dillon-Gasparino were savvy enough to wait out the housing boom of a decade ago as renters. Not until 2010, well into the bust, did they buy a house in the Venice neighborhood of Los Angeles, less than a mile from the beach, for $810,000.