10 Psychological States You've Never Heard Of &mdash; And When You Experienced Them 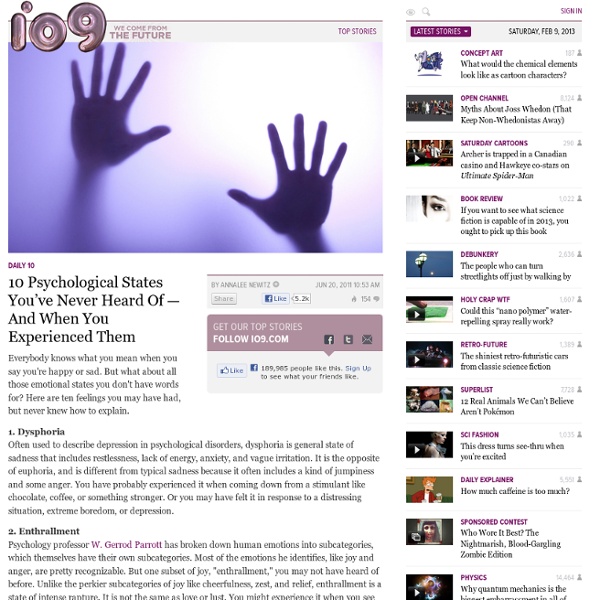 Related:  Psychology tree • rickygray • We Are Human. • Bits that worked

How to Detect Lies - body language, reactions, speech patterns Interesting Info -> Lying Index -> How to Detect Lies Become a Human Lie Detector (Part 1) Warning: sometimes ignorance is bliss. After gaining this knowledge, you may be hurt when it is obvious that someone is lying to you. The following deception detection techniques are used by police, forensic psychologists, security experts and other investigators. Introduction to Detecting Lies: 8 Emotional Patterns That Can Disturb Our Inner Peace Phil Watt, wakeup-world | At some stage of our lives we all experience emotional dysfunction to some degree, especially when we’re maturing. In some cases it may just be part of the learning curve as we grow into our more developed selves. Simple examples are that we might dwell on a problem too long, get upset or angry too easily, or think self-abusive thoughts consistently. For others it might impact us more significantly and even result in a form of mental illness. Yet that isn’t to say that negative thoughts or feelings are dysfunctional. In the short term, experiencing negative thoughts and emotions is natural because we’re human and it is part of the human experience.

Personality Types New Content The Primary Passions [05.15.03] Long & Sedley (pp. 410-11) translate Strobaeus [speaking for the Stoics]: "[O]ne must suppose that some passions are primary and dominant, while others have these as their reference. The generically primary ones are these four: appetite, fear, distress, pleasure. (4) Appetite and fear come first, the former in relation to what appears good, and the latter in relation to what appears bad.

7 Social Hacks For Manipulating People 1. Whenever someone is angry and confrontational, stand next to them instead of in front of them. You won’t appear as so much of a threat, and they eventually calm down. 2. Open with “I need your help.” The Top 10 Psychology Studies of 2010 The end of 2010 fast approaches, and I'm thrilled to have been asked by the editors of Psychology Today to write about the Top 10 psychology studies of the year. I've focused on studies that I personally feel stand out, not only as examples of great science, but even more importantly, as examples of how the science of psychology can improve our lives. Each study has a clear "take home" message, offering the reader an insight or a simple strategy they can use to reach their goals , strengthen their relationships, make better decisions, or become happier. If you extract the wisdom from these ten studies and apply them in your own life, 2011 just might be a very good year.

The Heroes of Myth and Folklore: Part One – Defining a Hero Herakles battling the Hydra There is a special genre of tales in the texts of Hellenic mythology that recounts the deeds of extraordinary men and women such as Herakles, Perseus, Jason and Medeia to name but a few. These larger-than-life people are called the Heroes. Their stories derive from the most ancient form of the oral tradition and have evolved through the ages into the symbolic and historical mythology of mortals who were granted immortality through their destinies and the homage and remembrance of their descendants.

Emotions – How To Understand, Identify and Release Your Emotions Home -> Free Articles - Emotions - How To Understand, Identify Release Your Emotions. · What Are Emotions – Feelings? Different people define emotions in different ways. Some make a distinction between emotions and feelings saying that a feeling is the response part of the emotion and that an emotion includes the situation or experience, the interpretation, the perception, and the response or feeling related to the experience of a particular situation. For the purposes of this article, I use the terms interchangeably. John D.

Neuroticism Emotional stability[edit] At the opposite end of the spectrum, individuals who score low in neuroticism are more emotionally stable and less reactive to stress. They tend to be calm, even-tempered, and less likely to feel tense or rattled. Although they are low in negative emotion, they are not necessarily high on positive emotion. Being high on positive emotion is an element of the independent trait of extraversion. Neurotic extraverts, for example, would experience high levels of both positive and negative emotional states, a kind of "emotional roller coaster". 15 Things That Emotionally Strong People Don't Do There is a particular aspect of mental strength that is the deciding factor of whether or not you will have a good life. There are many levels to mental strength and all are needed to be successful and happy. The one particular area of mental strength that has the greatest impact is that of emotional strength. Emotions are, of course, a part of our psyche, yet nevertheless, can be distinguished from the remainder of mental qualities because they most directly influence our physical body. They affect the way our body functions and they drive every single one of our actions.

The Secret Language of Symbols A Guide to The Structure of Spiritual Emblems There is a secret language we all recognize, but few are fluent in- the language of symbols. Symbols surround us in myriad forms and form an inextricable part of our daily lives, yet unlike our spoken languages, schooling in symbolism is left to the individual initiative. Even in religious teaching, symbols are presented as emblems of belonging, mere historical artifacts one wears to identify with one’s faith. Many of the symbols we take for granted today as static signs of religious or secular life were created long ago, representations of the movements of earth and heaven, symbols of the seasons, and representations of cosmic and earthly deities.