A New Thermodynamics Theory of the Origin of Life 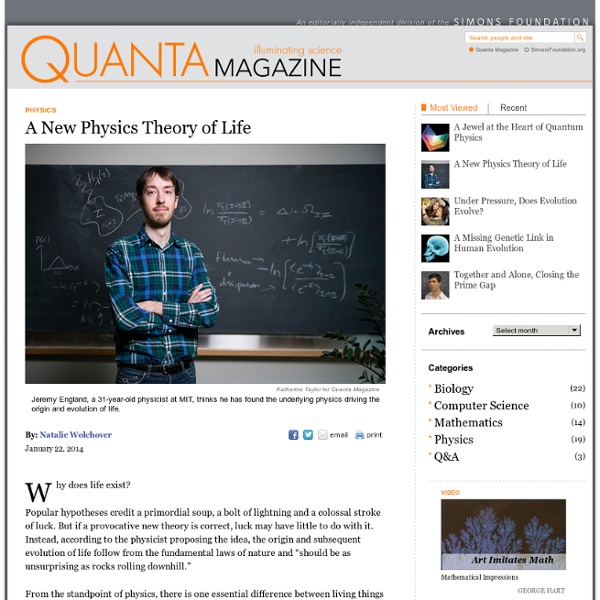 Why does life exist? Popular hypotheses credit a primordial soup, a bolt of lightning and a colossal stroke of luck. But if a provocative new theory is correct, luck may have little to do with it. Instead, according to the physicist proposing the idea, the origin and subsequent evolution of life follow from the fundamental laws of nature and “should be as unsurprising as rocks rolling downhill.” From the standpoint of physics, there is one essential difference between living things and inanimate clumps of carbon atoms: The former tend to be much better at capturing energy from their environment and dissipating that energy as heat. Jeremy England, a 31-year-old assistant professor at the Massachusetts Institute of Technology, has derived a mathematical formula that he believes explains this capacity. Kristian Peters Cells from the moss Plagiomnium affine with visible chloroplasts, organelles that conduct photosynthesis by capturing sunlight. Courtesy of Jeremy England Wilson Bentley

Related:  Search for extraterrestrial intelligence • Evolution • UFOs? UAP? Who Goes There? Life in the Beyond...

Life on other planets could be far more widespread, study finds (Phys.org) —Earth-sized planets can support life at least ten times further away from stars than previously thought, according to academics at the University of Aberdeen. A new paper published in Planetary and Space Science claims cold rocky planets previously considered uninhabitable may actually be able to support life beneath the surface. The team, which included academics from the University of St Andrews, challenge the traditional 'habitable zone' – i.e. the area of space around a star, or sun, which can support life – by taking into consideration life living deep below the ground.

Sea anemone: genetically ½ animal, ½ plant A team led by evolutionary and developmental biologist Ulrich Technau at the University of Vienna has discovered that sea anemones display a genomic landscape with a complexity of regulatory elements similar to that of fruit flies or other animal model systems. This suggests that this principle of gene regulation is already 600 million years old and dates back to the common ancestor of human, fly and sea anemone. On the other hand, sea anemones are more similar to plants rather to vertebrates or insects in their regulation of gene expression by short regulatory RNAs called microRNAs. These surprising evolutionary findings are published in two articles in the journal Genome Research.

Why the Government Is Cagey on UFO Matters Three days ago, The New York Times published what appeared to be a bombshell of a story. The report revealed that, from roughly 2007 through 2012, the Department of Defense ran a small program out of the Defense Intelligence Agency known as the Advanced Aerospace Threat Identification Program. The mission was, in short, to look into UFO reports and assess if any of them represented a threat to the United States. On the face of it, that looks like a big deal in anybody’s book. Tek 520A VectorClock! Television broadcasting has switched from analog to digital - and if you’ve got a nice HD TV, you’ll be loving it! But with that transition came the death of an entire breed of equipment – the Vectorscope. Just to be clear, these are not monitors for playing ancient video games using vector graphics!!

The Science of Why We Don't Believe Science Illustration: Jonathon Rosen "A MAN WITH A CONVICTION is a hard man to change. Tell him you disagree and he turns away. Absurd Creature of the Week: The Incredible Critter That's Tough Enough to Survive in Space - Wired Science A color-enhanced scanning electron micrograph of a water bear, which is probably the only creature on Earth that looks like a cannon wearing wrinkled khakis. Image: Eye of Science/Science Source In 1933, the owner of a New York City speakeasy and three cronies embarked on a rather unoriginal scheme to make a quick couple grand: Take out three life insurance policies on the bar’s deepest alcoholic, Mike Malloy, then kill him.

Tree of Life Web Project The Tree of Life Web Project (ToL) is a collaborative effort of biologists and nature enthusiasts from around the world. On more than 10,000 World Wide Web pages, the project provides information about biodiversity, the characteristics of different groups of organisms, and their evolutionary history (phylogeny). Each page contains information about a particular group, e.g., salamanders, segmented worms, phlox flowers, tyrannosaurs, euglenids, Heliconius butterflies, club fungi, or the vampire squid. Drake equation The Drake equation is a probabilistic argument used to estimate the number of active, communicative extraterrestrial civilizations in the Milky Way galaxy. The equation was written in 1961 by Frank Drake not for purposes of quantifying the number of civilizations,[1] but intended as a way to stimulate scientific dialogue at the world's first SETI meeting, in Green Bank, West Virginia. The equation summarizes the main concepts which scientists must contemplate when considering the question of other radio-communicative life.[1] The Drake equation has proved controversial since several of its factors are currently unknown, and estimates of their values span a very wide range. This has led critics to label the equation a guesstimate, or even meaningless. History[edit]

BeWifi lets you steal your neighbor’s bandwidth when they’re not using it What if when you were up at a ridiculous hour Skyping your relatives in Australia, you could borrow unused bandwidth from your sleeping neighbours to make your own broadband connection faster and stronger? High up in a glass tower in Barcelona, Telefonica's research and development team has been attempting to tackle exactly this question. The solution they have come up with, BeWifi, is a technology that gathers bandwidth from local Wi-Fi routers in order to enhance the connection of the users that happen to be on the internet at exactly that moment in time. Telefonica started to research the idea, without making changes to existing infrastructure, in 2008. "We were exploring what would be the opportunities for bringing the peer-to-peer and sharing phenomenon into this arena," Pablo Rodriguez, Telefonica's Director of Product Innovation & Research, told Wired.co.uk. "Your broadband connection is not used 100 percent of the time," he explained.

Is Time an Illusion? (Video) “Time has no independent existence apart from the order of events by which we measure it.” —Albert Einstein Surprising as it may be to most non-scientists and even to some scientists, Albert Einstein concluded in his later years that the past, present, and future all exist simultaneously. In 1952, in his book Relativity, in discussing Minkowski’s Space World interpretation of his theory of relativity, Einstein writes: Since there exists in this four dimensional structure [space-time] no longer any sections which represent “now” objectively, the concepts of happening and becoming are indeed not completely suspended, but yet complicated. It appears therefore more natural to think of physical reality as a four dimensional existence, instead of, as hitherto, the evolution of a three dimensional existence.

The Search for Aliens Is Just Getting Started A lot of people assume we're looking for complex patterns in radio signals, like the value of pi, a list of prime numbers, or the Fibonacci [sequence]. But what we're really looking for is just any radio signal that some sort of transmitter could have made—one that's restricted to a very narrow band of frequencies. This is because the cosmos makes a lot of radio waves and other noise, but those are all over the dial, which is a sign of bad engineering, because you're wasting a lot of energy. We're looking for something that is, so to speak, carefully manicured. Now there are also other SETI experiments looking for other types of signals beyond those made of radio waves, particularly very short flashes of visible light.

Evolution of life's operating system revealed in detail Posted June 30, 2014 | Atlanta, GA The evolution of the ribosome, a large molecular structure found in the cells of all species, has been revealed in unprecedented detail in a new study. Click image to enlarge In a new study, scientists compared three-dimensional structures of ribosomes from a variety of species of varying biological complexity, including humans, yeast, bacteria and archaea. The researchers found distinct fingerprints in the ribosomes where new structures were added to the ribosomal surface without altering the pre-existing ribosomal core, which originated over 3 billion years ago before the last universal common ancestor (LUCA) of life.

First contact: what if we find not organic life but ET’s AI? We have a problem. In a 10-billion-year-old galaxy there should have been ample opportunity for at least one species to escape its own mess, and to spread across the stars, filling every niche. That this species doesn’t seem to have come calling leads to Fermi’s Paradox – if life isn’t impossibly rare, then where is everyone? Efforts to scan the skies for signs of intelligent life have come up blank too, adding to the puzzle. Perhaps the vast gulfs of interstellar space and the narrow windows of time for communicative species to exist within shouting distance of each other are to blame.