Out of the Blue - Full HD UFO Movie 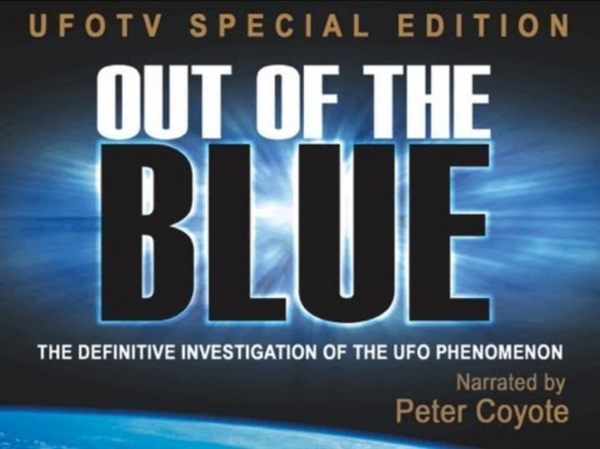 Aliens/Extraterrestrials are Really Demon Spirits! Are there really extraterrestrial and UFOs visiting planet Earth or are they really demon spirits masquerading as extraterrestrials? Are extraterrestrials and UFOs real? Let's examine these questions in detail. A poll taken by Fox News of Americans show that 39% of men, and 30% of women say they accept the existence of unidentified flying objects (UFOs) (source). Fifteen years ago a survey was performed by CNN to mark 50 years of an alleged UFO sighting in Roswell, NM. The results of that poll are as follows: 1. 80% of Americans thought the government hid knowledge of extraterrestrials 2. 54% believed intelligent life was outside the Earth 3. 44% said if they met an extraterrestrials they would be friends (26% believe they would be enemies) 4. 39% expected aliens not to look humanoid(source). In Canada ,3 million people have said they have seen UFOs. There is even a UFO Religion. Sir John Dee Enochian Demons Look like Alien Sir John Dee Astrologer Aleister Crowley ET Friend Lam

ABC's "V" Season 2: Alien Deception Continues The Alien Agenda: Mingle themselves with the seed of men In the first article about the ABC series “V” we went through many details to explain how the show promotes the idea of alien beings coming to Earth as the “saviors” of the planet and how this idea, which is also promoted by many figures in the New Age Movement, is one of that is very spiritually dangerous and can lead to much confusion in the church. As stated before, I do not believe in extra-terrestrial beings but the Bible is clear that fallen angelic and demonic beings do exist, have interacted with humanity in the past and will do so again in the future. Now in its second season, some of this blog’s initial predictions about the show have come to pass. The Sons of God and the Daughters of Men In our initial article we referenced the Nephilim, the hybrid offspring of the fallen angels of Genesis 6, who came to Earth, took human women as wives and had children with them: The End Time Kingdom – Mingled With the Seed of Men? 2.

Alien Abductions Stop In Jesus' Name - CE4 Research Testimonies The CE4 Research Group Testimony – 17 The Terror That Comes in the Night There is a book by David J. Hufford called The Terror that Comes in the Night. The sub-title of the book describes the contents: “An Experience-Centered Study of Supernatural Assault Traditions.” The Roper Poll used a sample of 5,947 respondents corresponding to the equivalent number among the 185,000,000 ostensibly represented by Roper’s demographically balanced sample. In 1973 my husband Coleman and I and our two baby boys lived in Virginia. I had no doubt that they were capable of doing this and my terror escalated. I immediately woke Coleman and told him what had happened. Then over twenty years later Coleman was writing a pilot script for a television series that was supposed to be about all sorts of strange phenomena. At the same time, I was reading a book about several different missionaries who had gone to a variety of Third World countries to tell people about Jesus.

The 'Prometheus' Movie: The Alien Gospel Deception Worship the Creator, not the creation. “Prometheus” , a movie by legendary director Ridley Scott, is going to be a blockbuster hit in summer 2012. The movie, about a team of scientists and astronauts who go on a top-secret journey to contact an alien race, has drawn much of its inspiration from the “Alien Gospel”, also known as the “Ancient Astronaut Theory” which states that aliens at some point in the distant past, created humanity and are responsible for the advanced knowledge held by ancient civilizations. Prometheus marks the return to the Science Fiction genre for Ridley Scott, who directed the films ‘Alien’ and ‘Blade Runner’, considered two of the greatest sci-fi movies of all time. The “profound question” and “life’s ultimate mystery” in the film are specifically, where did humans come from? The crew of the Prometheus encounter an ancient megalith as they explore the 'Temple of the Gods.' The assignment involves heading to the “Citadel” of the ancient alien engineers. </b>*}

Strange life signs found on meteorites WASHINGTON, D.C. - A NASA scientist reports detecting tiny fossilized bacteria on three meteorites, and maintains these microscopic life forms are not native to Earth. If confirmed, this research would suggest life in the universe is widespread and life on Earth may have come from elsewhere in the solar system, riding to our planet on space rocks like comets, moons and other astral bodies. The study, published online late Friday in The Journal of Cosmology, is considered so controversial it is accompanied by a statement from the journal's editor seeking other scientific comment, which is to be published starting on Monday. The central claim of the study by astrobiologist Richard Hoover is that there is evidence of microfossils similar to cyanobacteria — blue-green algae, also known as pond scum — on the freshly fractured inner surfaces of three meteorites. He is not the first to claim discovery of microscopic life from other worlds. Hoover's research may well meet the same fate. "Dr.

Alien invasion? That's OK with most Americans Not only do more than 80 million Americans believe that UFOs exist, many are not afraid of an alien drop-in, according to a new study. As part of its new "Chasing UFOs" series, the National Geographic Channel conducted a poll to assess Americans' views on the paranormal. The study found that 11% of those polled firmly believed they'd spotted a UFO. In addition, most of those polls said they would regard a minor alien invasion as only a minor inconvenience. And most expect the visitors to be "E.T." In spite of the recent uproar over the Miami face-chewing incident, 71% in this survey were more likely to believe in aliens than in zombies -- or vampires or superheroes, for that matter. The study threw in a few fun questions. President Obama had the questionable honor of being perceived as better able to handle an alien invasion than GOP presidential candidate Mitt Romney -- this was a notion held more strongly among women than men and among younger folks than older. Join Amy on Google+.

The Nephilim -- Giants in the Bible David slaying the giant Goliath – “And there were giants in those days, and after that..” Numbers 13:31But the men that went up with him said, We be not able to go up against the people; for they are stronger than we. 32And they brought up an evil report of the land which they had searched unto the children of Israel, saying, The land, through which we have gone to search it, is a land that eateth up the inhabitants thereof; and all the people that we saw in it are men of a great stature. 33And there we saw the giants, the sons of Anak, which come of the giants: and we were in our own sight as grasshoppers, and so we were in their sight. When Moses sent his spies to scout the Promised Land so the children of Israel could enter it, the spies reported seeing beings there who were giants. So what is this all about? The Days of Noah So let’s start with Matthew 24:26. So clearly we see these are questions regarding the end times. The Hebrew term here once again is B’nai Ha Elohim.

UFOs and Alien Beings Written by Michael Gleghorn Michael Gleghorn addresses issues related to reports of UFO and alien sightings. He considers the various possible causes before closing with a biblical, Christian perspective pointing out these reports are often presented like false gospels. At the end of the day, even an alien cannot take away from the importance of faith in Christ. This article is also available in Spanish. A Tale of Two Hypotheses It seems that almost everyone is interested in reports of UFOs and alien encounters. First, however, it's essential to note that most UFOs (unidentified flying objects) become IFOs (identified flying objects). If residual UFOs are not hoaxes, hallucinations, or some natural or man-made phenomena, then what are they? The interdimensional hypothesis agrees "that some UFOs are real phenomena that may exhibit physical . . . effects How might we tell which, if either, of these two hypotheses is correct? The Extraterrestrial Hypothesis Dr. The Interdimensional Hypothesis

Researcher and Teacher of God's Word From Creation to the End Times Evolution is the bedrock of the end-times deception. The two subjects are seemingly unrelated to each other. However, it is evolution that so strongly set the stage for the events that are beginning to happen in the last days. Charles Darwin Before Charles Darwin’s book Evolution of the Species, it was not respectable to be an atheist because one still had to answer that thorny question of how did we get here. Arguing that there was not a God was not intellectually satisfying so long as the question of origins remained under the domain of Christianity, the Bible, or at least some form of religious explanation. Once people could suggest that no god (especially the God of the Bible) was responsible for the creation of the universe then the next phase of the deception could come into play: extraterrestrials (aliens) would become man’s creator. Francis Crick Co-Discover of DNA somewhere in the universe, transported the necessary seeds of life to planet earth many millions of years ago.