The Meaning of Emergent Urbanism, after A New Kind of Science 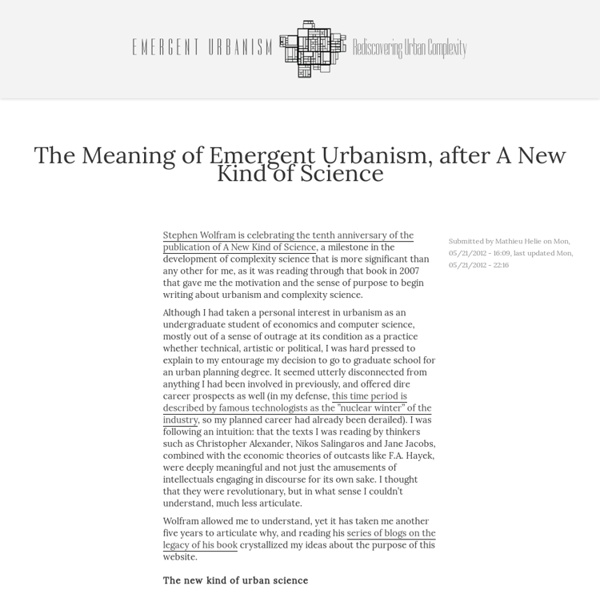 To walk the path of Jane Jacobs – review of What We See, Advancing the Observations of Jane Jacobs Jane Jacobs died in the spring of 2006. Three years earlier she had published the last book of her illustrious career as a philosopher, Dark Age Ahead, prophesying the fall of North American civilization. Today, this civilization is having a severe stroke due to all the factors that she warned us about. Instead of feeling confident about the outcome, being armed with the knowledge and wisdom of a great philosopher, our societies are plunged into total confusion. I was invited to review a recently published collection of essays in honor of Jane Jacobs, “What We See: Advancing the Observations of Jane Jacobs”, gathering articles from a diverse crowd of intellectuals, academics, activists, acquaintances of Jane and honorary disciples. The first hint of this is seen in the epilogue, when editors Stephen Goldsmith and Lynne Elizabeth casually remark that Jane Jacobs “respected science” despite having “no academic pedigree”. Can North American civilization survive?

LSE Cities | Frontpage | LSE Cities Theory Talks: Theory Talk #20: David Harvey What is, according to you, the biggest challenge / principal debate in current IR (International Relations)? And what is your position or answer to this challenge / in this debate? I think the principal challenge is to theorize ‘correctly’ the relationship between the territoriality of political power and the spatiality of capital accumulation. To clarify that statement, one has to inquire into the nature of these respective processes. I’ve tried to work out for myself how to think about these two logics but I understand that my answers might not necessarily be the correct ones, but I think we should be having a far more serious debate on that question. How did you arrive at where you currently are in IR? For me, the epiphany came in the late 60s, early 70s, when I understood that the field I was working in, that of quantitative geography, simply couldn’t grasp what was going on politically in Vietnam nor economically with the crisis of ’72-’75. I’d like to ask: what is the state?

Crumbling Facade Got it! This website uses google, which in turn uses cookies to deliver ads and track usage information. If you use the website you agree that we use cookies. This message is to inform you about EU law since september 2015 More info Cookie Consent plugin for the EU cookie law Welcome to Fractal Forums > Gallery > Linked to Boards > 3d > Mandelbulb 3d Return to Gallery Powered by SMF Gallery Pro Page created in 3.716 seconds with 40 queries. Working together to make our cities great | EngagingCities | the internet of things, open data and the city

MAS CONTEXT Saskia Sassen The Unravelling of the Real 3D Mandelbrot Fractal Visit First page Experimenting with iterations and powers Okay enough eye candy for now. Let's have a closer look at the structure of this beast. The final stage (infinity iterations) is very similar at first glance to iteration 5000 (unless you zoom right in), as the shape converges to a shape comprised of tangent circles. One interesting question is: Does this same phenomenon happen with our power 8, 3D Mandelbulb? Power 8 (zooming into this object produces all the eye candy on the previous page): Click any picture to enlarge. A higher quality image below, and a super-large 4000x4000 version is here for the patient. And once you zoom into that, you get the magic as shown before. Squaring (power 2) Zooming in to the object above will produce mostly relatively dull patterns and maybe one or two surprises, but which still mostly have only 'whipped cream' style textures (see here for a 7500x7500 pixel render if you're patient). Finally, let's take a look at power 3. Power 3 Click any to enlarge.