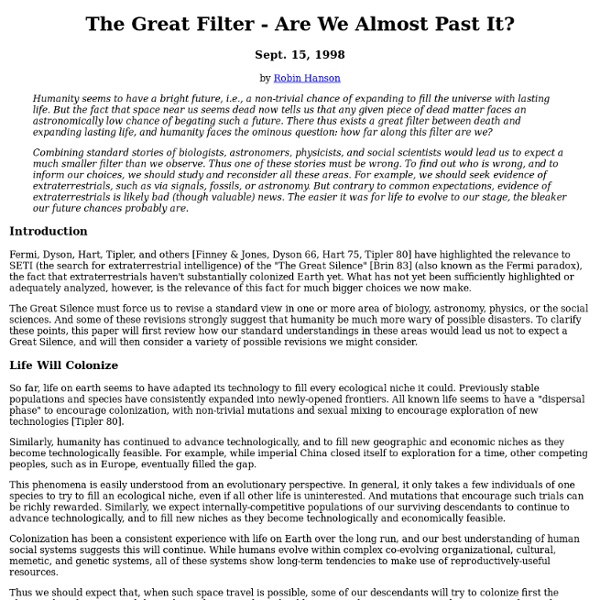 Sept. 15, 1998 by Robin Hanson Humanity seems to have a bright future, i.e., a non-trivial chance of expanding to fill the universe with lasting life. But the fact that space near us seems dead now tells us that any given piece of dead matter faces an astronomically low chance of begating such a future. Introduction Fermi, Dyson, Hart, Tipler, and others [Finney & Jones, Dyson 66, Hart 75, Tipler 80] have highlighted the relevance to SETI (the search for extraterrestrial intelligence) of the "The Great Silence" [Brin 83] (also known as the Fermi paradox), the fact that extraterrestrials haven't substantially colonized Earth yet. The Great Silence must force us to revise a standard view in one or more area of biology, astronomy, physics, or the social sciences. Life Will Colonize So far, life on earth seems to have adapted its technology to fill every ecological niche it could. This phenomena is easily understood from an evolutionary perspective. The Data Point The Great Filter Related:  UFOs? UAP? Who Goes There? Life in the Beyond...

Why Habitable Exoplanets Are Bad News for Humanity's Future - The Crux This article was originally published on The Conversation. Last week, scientists announced the discovery of Kepler-186f, a planet 492 light years away in the Cygnus constellation. Kepler-186f is special because it marks the first planet almost exactly the same size as Earth orbiting in the “habitable zone” – the distance from a star in which we might expect liquid water, and perhaps life. What did not make the news, however, is that this discovery also slightly increases how much credence we give to the possibility of near-term human extinction. The Great Filter is an argument that attempts to resolve the Fermi Paradox: why have we not found aliens, despite the existence of hundreds of billions of solar systems in our galactic neighborhood in which life might evolve? This apparent absence of thriving extraterrestrial civilizations suggests that at least one of the steps from humble planet to interstellar civilization is exceedingly unlikely. Are We Alone? Or Is the Filter Ahead of Us?

Our Best Bet for Colonizing Space May Be Printing Humans on Other Planets Assuming human deep space travel turns out to be not just incredibly dangerous, but perhaps “crazy idiotic" and "laughable," as Harvard biologist Gary Ruvkun put it, the tenacious dream of an interstellar civilization forces some out-of-the box thinking. What if, instead of rocketing humans to other planets, we made an exact copy on site? Adam Steltzner, the lead engineer on the NASA JPL's Curiosity rover mission, believes that to send humans to distant planets, we may need to do one of two things: look for ways to game space-time—traveling through wormholes and whatnot—or rethink the fundamental idea of "ourselves." "Our best bet for space exploration could be printing humans, organically, on another planet," said Steltzner on stage at Smithsonian Magazine’s Future Is Now conference in Washington, DC this month. The "printing" idea starts out by encoding human genetic information in bacteria so that our DNA can hitch a ride to another planet. Beautiful, fantastic, and totally bonkers.

Point and Shoot - Issue 3: In Transit The history of human exploration has always been tied to the search for a destination. Space travel is no different: The Apollo program, which ferried humans to the moon, was not only a scientific and technical achievement, but also an exercise in planting flags and leaving bootprints. Yet proposals are now brewing to launch missions to empty dots in the vastness of space, albeit ones with very special properties. Take any planet in orbit around a star, or any moon that spins around a planet. In each of these systems there will be five spots, arranged in a geometrical configuration that resembles the points of an archer’s drawn bow, where the combined gravitational fields and centrifugal force of the bodies’ rotation cancel out. These are zones of hidden equilibrium, gravitational lacunae amid the ceaseless movement of celestial bodies. The name “Lagrange points” may be a bit of a misnomer, as they vary in character and stability.

A New Thermodynamics Theory of the Origin of Life Why does life exist? Popular hypotheses credit a primordial soup, a bolt of lightning and a colossal stroke of luck. But if a provocative new theory is correct, luck may have little to do with it. Instead, according to the physicist proposing the idea, the origin and subsequent evolution of life follow from the fundamental laws of nature and “should be as unsurprising as rocks rolling downhill.” From the standpoint of physics, there is one essential difference between living things and inanimate clumps of carbon atoms: The former tend to be much better at capturing energy from their environment and dissipating that energy as heat. Jeremy England, a 31-year-old assistant professor at the Massachusetts Institute of Technology, has derived a mathematical formula that he believes explains this capacity. Kristian Peters Cells from the moss Plagiomnium affine with visible chloroplasts, organelles that conduct photosynthesis by capturing sunlight. Courtesy of Jeremy England Wilson Bentley

Alpha Centauri B may have "superhabitable" worlds Since Earth is the only known inhabited planet and we happen to live here, it’s only natural to regard it as the ideal place for life to exist, and to assume that another life-bearing planet would be fairly similar. However, that is not the opinion of scientists René Heller and John Armstrong who contend that there might be a planet even more suitable for life than Earth 4.3 light years away orbiting the star Alpha Centauri B. View all The nice thing about having a hypothetical “superhabitable” planet revolving around Alpha Centauri B, which is part of a triple star system, is that it makes it a lot easier to indulge in a bit of a thought experiment based on the arguments put forward by Heller, of the Department of Physics and Astronomy, McMaster University, Hamilton in Ontario, Canada, and Armstrong, of the Department of Physics, Weber State University in Ogden, Utah. Imagine we’re in a spaceship approaching the planet in question. If you want a habitable planet, you need the right sun.

The truth about extraterrestrials: Will we ever discover intelligent life in the universe? This post is one in a series covering, and expanding on, topics in the book “The Copernicus Complex“ (Scientific American/FSG). The conversation usually goes like this: Do you think we’re alone in the universe? Answer A) : No, absolutely not. Answer B): We might be. I’ve lost track of how many times I’ve had this exchange, with scientists, with family, with random people at pubs and (once) on a heavily forested hillside in Norway with a pair of slightly suspicious looking hikers who had probably just hidden a body somewhere. There are some caveats. This is an awfully unsatisfactory state of affairs, a set of answers that are enormously influenced by our interpretation of events here on Earth. It may not stay that way for much longer, between our exploration of Mars and our ambitions for exploring places like comets and icy moons, we really do seem to be getting closer to examining local possibilities for life. What do you make of this? Yet this isn’t true at all.

There may be no “earth-like” planets out there This year has been a spectacular one for exoplanets. New discoveries and new insights have truly pushed the gateway to other worlds even further open. In the past 12 months we’ve gained increasingly good statistics on the incredible abundance of planets around other stars and their multiplicity. We also finally seem to have evidence that our neighboring star Alpha Centauri B does indeed harbor at least one world. It is by any set of standards, a great haul. But I continue to be a bugged by the claims of ‘habitable’ worlds and ‘Earth-like planets’ that seem to beset many scientific announcements (including I’m ashamed to say my own). First, when press releases state that a ‘habitable’ world may have been found, the truth is far more complex. And this is just the beginning. This does not mean that some of them don’t hit the sweet spot, but it’s horrendously premature to say so. Which gets us to the other point, the cavalier use of the phrase ‘Earth-like’.

Signs of Water Found on 5 Alien Planets by Hubble Telescope NASA's Hubble Space Telescope has detected water in the atmospheres of five planets beyond our solar system, two recent studies reveal. The five exoplanets with hints of water are all scorching-hot, Jupiter-size worlds that are unlikely to host life as we know it. But finding water in their atmospheres still marks a step forward in the search for distant planets that may be capable of supporting alien life, researchers said. "We're very confident that we see a water signature for multiple planets," Avi Mandell, of NASA's Goddard Space Flight Center in Greenbelt, Md., lead author of one of the studies, said in a statement. The two research teams used Hubble's Wide Field Camera 3 to analyze starlight passing through the atmospheres of the five "hot Jupiter" planets, which are known as WASP-17b, HD209458b, WASP-12b, WASP-19b and XO-1b. The atmospheres of all five planets showed signs of water, with the strongest signatures found in the air of WASP-17b and HD209458b. 0 of 10 questions complete

Related:
Related:  UFOs? UAP? Who Goes There? Life in the Beyond...