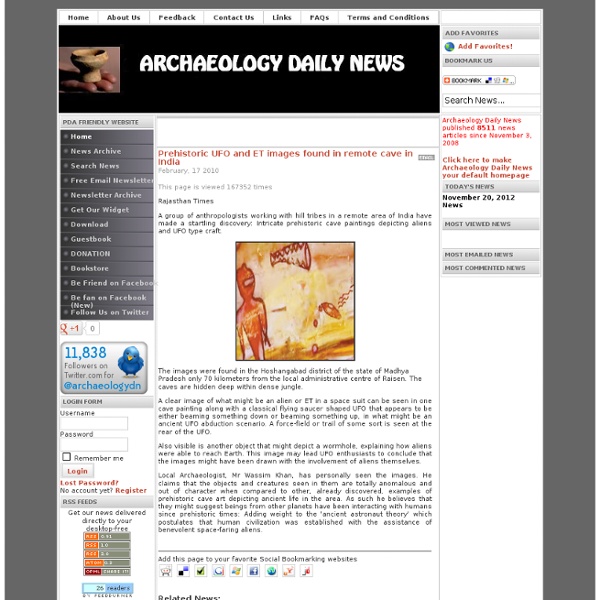 This page is viewed 168321 times Rajasthan Times A group of anthropologists working with hill tribes in a remote area of India have made a startling discovery: Intricate prehistoric cave paintings depicting aliens and UFO type craft. The images were found in the Hoshangabad district of the state of Madhya Pradesh only 70 kilometers from the local administrative centre of Raisen. A clear image of what might be an alien or ET in a space suit can be seen in one cave painting along with a classical flying saucer shaped UFO that appears to be either beaming something down or beaming something up, in what might be an ancient UFO abduction scenario. Also visible is another object that might depict a wormhole, explaining how aliens were able to reach Earth. Local Archaeologist, Mr Wassim Khan, has personally seen the images. Add this page to your favorite Social Bookmarking websites Related News: Related:  UFO • UFOs/Aliens

DULCE NEW MEXICO--WHAT WE &quot;KNOW&quot;--MAYBE THE FOLLOWING MATERIAL COMES FROM PEOPLE WHO KNOW THE DULCE (UNDERGROUND) BASE EXISTS. THEY ARE PEOPLE WHO WORKED IN THE LABS; ABDUCTEES TAKEN TO THE BASE; PEOPLE WHO ASSISTED IN THE CONSTRUCTION; INTELL PERSONAL (NSA, CIA, FBI etc.). THIS INFORMATION IS MEANT FOR THOSE WHO ARE SERIOUSLY INTERESTED IN THE DULCE BASE. FOR YOUR OWN PROTECTION, "USE CAUTION" WHILE INVESTIGATING THIS COMPLEX, even on the net. An ongoing investigation: "THE DULCE BASE" by Jason Bishop III This facility is a "GENETICS LAB" and is connected to Los Alamos via a "Tube-Shuttle." In the revised September 1950 edition of "THE EFFECTS OF ATOMIC WEAPONS" prepared for and in cooperation with the U.S. On page #381: "There are apparently no fundamental difficulties in construction and operating underground various types of important facilities. CAUGHT IN THE GAME -- Centuries ago, "surface people" (some say, Illuminati) entered into a pact with an "Alien Nation" (hidden within the Earth). WHOSE PLANET IS THIS? The U.S.

Paranormal, UFOs, Cryptids and Unexplained Phenomena Norman Muscarello, a teenage Navy recruit, was walking down a quiet country highway at night, when suddenly, a huge object loomed above him. Thus began the "Incident at Exeter," a series of sightings officially qualified as "unidentified." The encounters that night took special precedence over other UFO sightings because of the credibility of two Exeter police officers who also saw the UFO, as well as that of the dispatcher and supervising officer who first heard Muscarello's account. Printed in the The Portsmouth Herald (Portsmouth, NH), Sept. 2, 2005 - Engulfed in the blackness of a late summer night, a teenage Navy recruit walked down the quiet country highway. The time was around 2 a.m. In September and October 1965, several sightings in New Hampshire were carefully investigated and documented by local and federal offices. A similar report substantiated his story. Bertrand saw nothing but a bright star and sent her home. The teen led him back to the site where he'd seen the craft.

The Dulce Files - DULCE NEW MEXICO AND A COSMIC CONSPIRACY? UFO Photograph : Unknown - Unknown hello, thought you might like to see these pictures that my wife found on a website a few years ago. sorry i have no further information but i do know that i haven't been able to find any background info on these as i cannot find them anywhere and my wife cannot remember where she found them. they look alot like the gulf breeze photo's to me but i can't find these particular photos on any website related to gulf breeze. jack The following information was submitted by a reader: "...these were taken in Wisconsin by a different person (Paul Scheeler) instead of Florida (Ed Walters)." Source / Credit: Jack Nethering / UFO Evidence Photograph ID: 328 ID: 328 FAIR USE NOTICE: This page may contain copyrighted material the use of which has not been specifically authorized by the copyright owner.

3 Very Large Objects In Space Flying To Earth - Canada ufo E.T. does not need to phone home anymore, someone, or something is on it’s way to earth. SETI Astrophysicist Craig Kasnov ( not to be confused with Craig Kasnoff ) has announced the approach to the Earth of 3 very large, very fast moving objects. The length of the "flying saucers" is in the range of tens of kilometers. Landing, according to calculations of scientists, should be in mid-December 2012. A few very large objects rapidly approaching the Earth - says SETI astrophysicist Craig Kasnov. 19 25 12 -89 46 03 - the first large object 16 19 35 -88 43 10 - a cylindrical object 02 26 39 -89 43 13 - the object as a circle The project participants are assured that the facilities are absolutely real, and the American space agency NASA is trying to conceal important information. None of these objects can be seen from the northern hemisphere. In any case, the only thing we can do now - wait for it - says Kasnov. - Soon celestial objects will be visible in a good telescope.

UFO Photograph : unknown - January 8, 2003 The following email was received by iwasabducted.com: FROM: Jack DATE: Sat, 9 Aug 2003 21:38:09 -0700 (PDT) TO: Pictures SUBJECT: First three of five triangle UFO pictures... I forward these pictures from a friend (first three of five). Here is what he says about these pictures... I had purchased a cheap digital camera and had cannibalized it to make an inexpensive CCD imaging system for my telescope. That morning I had gotten up early in the AM to try and get some pictures of Mars - which was rising early in the morning that time of year. If you ever used a telescope you know that you have to constantly readjust the direction that it is pointing because as the earth turns the object that the telescope is pointing at quickly moves out of view. It was quite difficult to maintain the telescope so that it remained pointed at the moving object (as you can imagine). Thanks, (I've deleted my friend's name per his request) Thanks,Jack Source / Credit: iwasabducted.com Photograph ID: 313 ID: 313

A.D. After Disclosure UFO Photograph : Green Bay, Wisconsin, USA - January, 2007 Here's a couple of photo's of what I think is the same object as the Weyauwega ufo. As I've now gotten quite a few photos in my investigations and most are just dust and lense flairs, this one intrigues me. An email contact of mine sent them. Jack Nethering. Source / Credit: Jack Nethering / UFOEvidence.org Photograph ID: 416 ID: 416 FAIR USE NOTICE: This page may contain copyrighted material the use of which has not been specifically authorized by the copyright owner.

3 mysterious objects discovered coming right at Earth... Well, this is an interesting story... An Astrophysicist from SETI has announced that he had made a rather startling discovery out on deep space... Three of them, to be precise... Astrophysicist Craig Kasnov has announced that he has discovered the large objects out in deep space that seem to be making a B-line for the Earth. Speechless... I don't know about you, friends, but my skin has goose bumps. If this is true... But don't base your sentiments on my reactions to this news... Follow this link to Skymap, load in the coordinates and see for yourself: Coordinates 19 25 12 -89 46 03 - the first large object16 19 35 -88 43 10 - a cylindrical object02 26 39 -89 43 13 - the object as a circle Due to the direction of their approach, Kasnov says that they will never been seen from the Northern Hemisphere, but that in the near future the three objects will be visible to residents in the Southern Hemisphere with the aid of only a decent telescope. Pants = RUINED