Startling new finding: 600 million years ago, a biological mishap changed everything. Ken Prehoda, a biochemist and director of the University of Oregon's Institute of Molecular Biology, discusses his research identifying the mutation that led to multicellular animals. 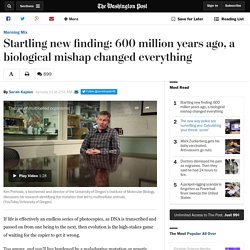 (YouTube/University of Oregan) If life is effectively an endless series of photocopies, as DNA is transcribed and passed on from one being to the next, then evolution is the high-stakes game of waiting for the copier to get it wrong. Too wrong, and you’ll live burdened by a maladaptive mutation or genetic disorder. Worse, you might never live at all. Evolutionary history of life. A New Thermodynamics Theory of the Origin of Life. Why does life exist? 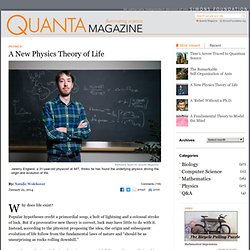 Popular hypotheses credit a primordial soup, a bolt of lightning and a colossal stroke of luck. But if a provocative new theory is correct, luck may have little to do with it. Instead, according to the physicist proposing the idea, the origin and subsequent evolution of life follow from the fundamental laws of nature and “should be as unsurprising as rocks rolling downhill.” From the standpoint of physics, there is one essential difference between living things and inanimate clumps of carbon atoms: The former tend to be much better at capturing energy from their environment and dissipating that energy as heat. Jeremy England, a 31-year-old assistant professor at the Massachusetts Institute of Technology, has derived a mathematical formula that he believes explains this capacity.

Kristian Peters. Ungulate Evolution. CRACKED: 7 Animals That Are Evolving Right Before Our Eyes. People who doubt evolution tend to have one main argument: "If evolution is true, why do we still see monkeys running around today, all chimp-like? 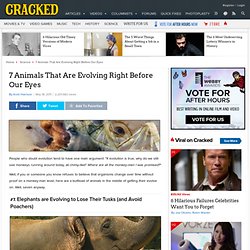 Where are all the monkey-men I was promised? " Well, if you or someone you know refuses to believe that organisms change over time without proof on a monkey-man level, here are a buttload of animals in the middle of getting their evolve on. Well, seven anyway. Elephants are Evolving to Lose Their Tusks (and Avoid Poachers) Here's a joke: What did the elephant say to the poacher? Getty"Stop! Sorry about that. GettyAnd ever since animal rights got involved, unemployment has shot up 300 percent. So elephants have decided to take matters into their own hands ... or trunks or weirdly rounded three-toed feet or whatever. By 2005, it was estimated that the tuskless population had risen to between 5 and 10 percent. GettyJust like your debilitating lisp after reading that out loud Russian Dogs are Evolving to Learn the Subways Getty Check it: Via MSNBC.

Evolution of life's operating system revealed in detail. Posted June 30, 2014 | Atlanta, GA The evolution of the ribosome, a large molecular structure found in the cells of all species, has been revealed in unprecedented detail in a new study. 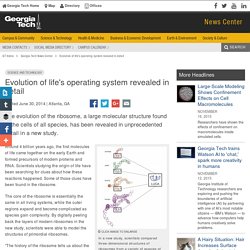 Click image to enlarge In a new study, scientists compared three-dimensional structures of ribosomes from a variety of species of varying biological complexity, including humans, yeast, bacteria and archaea. The researchers found distinct fingerprints in the ribosomes where new structures were added to the ribosomal surface without altering the pre-existing ribosomal core, which originated over 3 billion years ago before the last universal common ancestor (LUCA) of life. Orcas are first non-humans whose evolution is driven by culture. John Durban, NOAA Southwest Fisheries Science Center; research authorised by NMFS (US) By Colin Barras You could call it a culture shock. 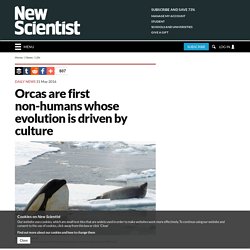 Many researchers accept that cultural experiences have helped shape human evolution – and evidence has now emerged that the same may be true of killer whales. Human genomes have evolved in response to our cultural behaviours: a classic example is the way that some human populations gained genes for lactose tolerance following the onset of dairy farming.

But whether genomes and culture co-evolve in other animal species has been unclear. Deep sea 'mushroom' may be new branch of life. 3 September 2014Last updated at 17:43 ET By Paul Rincon Science editor, BBC News website The bizarre creatures were collected from the deep sea in 1986 during a research cruise off Tasmania A mushroom-shaped sea animal discovered off the Australian coast has defied classification in the tree of life. 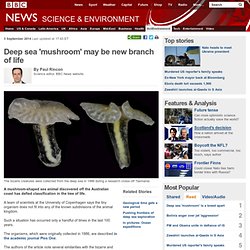 Evolution of Life. Theropod Dinosaur evolution into Birds. Sea anemone: genetically ½ animal, ½ plant. A team led by evolutionary and developmental biologist Ulrich Technau at the University of Vienna has discovered that sea anemones display a genomic landscape with a complexity of regulatory elements similar to that of fruit flies or other animal model systems. 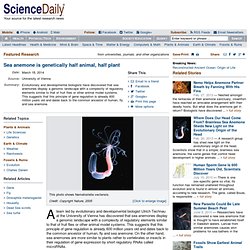 This suggests that this principle of gene regulation is already 600 million years old and dates back to the common ancestor of human, fly and sea anemone. On the other hand, sea anemones are more similar to plants rather to vertebrates or insects in their regulation of gene expression by short regulatory RNAs called microRNAs. These surprising evolutionary findings are published in two articles in the journal Genome Research. Cetacean Palaeobiology. The archaeocetes are a paraphyletic group of primitive cetaceans that include the earliest, terrestrial 'whales'. 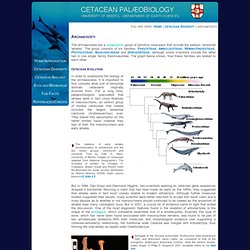 The group consists of six families: Pakicetidae, Ambulocetidae, Remingtonocetidae, Protocetidae, Basilosauridae and Dorudontidae, although some scientists include the latter two in one single family Basilosauridae. The graph below shows, how these families are related to each other. Cetacean Evolution In order to understand the biology of the archaeocetes, it is important to first consider what sort of terrestrial animals cetaceans originally evolved from. "Evolution is Fact" The 6 Weirdest Ways Wild Animals Are Having to Adapt to Us. Humanity's track record with animals has never been stellar. 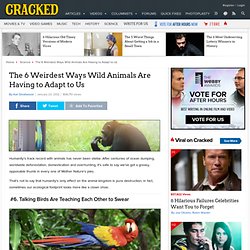 After centuries of ocean dumping, worldwide deforestation, domestication and overhunting, it's safe to say we've got a greasy, opposable thumb in every one of Mother Nature's pies. That's not to say that humanity's only effect on the animal kingdom is pure destruction; in fact, sometimes our ecological footprint looks more like a clown shoe. #6. Talking Birds Are Teaching Each Other to Swear Probably the only thing you know about parrots and cockatoos is that they can talk. After all, the pets that are raised among humans and learn (or learn to imitate) dozens of words sometimes either escape or are released into the wild.

That's why people around Sydney, Melbourne and other big cities in Australia have found wild cockatoos using English phrases. Now imagine how crazy you'd think you were going if one day you were walking through the woods and you suddenly heard a disembodied bird voice tell you to eat a dick. #5. . #4. Tree of Life Web Project. The Tree of Life Web Project (ToL) is a collaborative effort of biologists and nature enthusiasts from around the world. 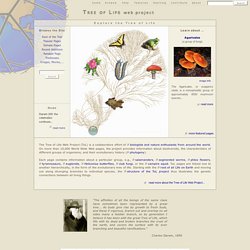 On more than 10,000 World Wide Web pages, the project provides information about biodiversity, the characteristics of different groups of organisms, and their evolutionary history (phylogeny). Each page contains information about a particular group, e.g., salamanders, segmented worms, phlox flowers, tyrannosaurs, euglenids, Heliconius butterflies, club fungi, or the vampire squid. ToL pages are linked one to another hierarchically, in the form of the evolutionary tree of life.

Starting with the root of all Life on Earth and moving out along diverging branches to individual species, the structure of the ToL project thus illustrates the genetic connections between all living things. The Great Tree of Life. 10 Animals You Won't Believe Are Closely Related. Thanks to the know-it-all from second grade, we're all aware that dolphins and whales are mammals, not fish.

But it's probably been a while since you've pondered just how incredibly, mind-blowingly weird it is that you and whales were the same animal more recently than whales and sharks. Or to put it in chart form, you and whales split up somewhere in the big tangle of bio diversity up top labeled "Age of Mammals" while whales and fish haven't been the same animals since way the hell down ... ... here where you see the word Selacchi.

So how is it that our evolutionary cousins ended up with flippers and fins exactly where fish have them and we ended up needing swimming lessons? Ediacaran Fauna.