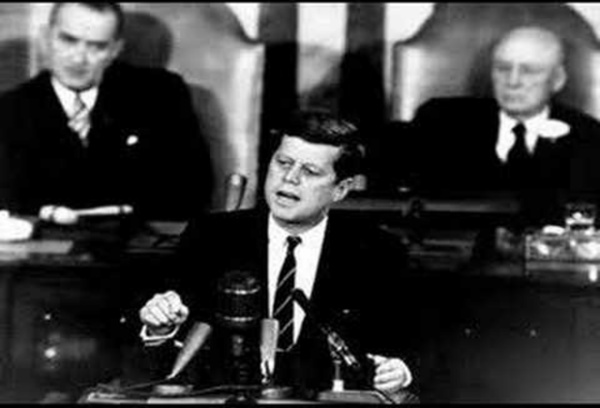 Executive Order 11110 Executive Order 11110 was issued by U.S. President John F. Kennedy on June 4, 1963. Background[edit] On November 28, 1961, President Kennedy halted sales of silver by the Treasury Department. Kennedy repeated his calls for Congress to act on several occasions, including his 1963 Economic Report, where he wrote:[3] I again urge a revision in our silver policy to reflect the status of silver as a metal for which there is an expanding industrial demand. Public Law 88-36[edit] The House of Representatives took up the president's request early in 1963,[4] and passed HR 5389 on April 10, 1963, by a vote of 251 to 122.[5][6] The Senate passed the bill on May 23, by a vote of 68 to 10.[7][8] Text of Executive Order[edit] President Kennedy's Executive Order (E.O.) 11110 modified the pre-existing Executive Order 10289 issued by U.S. The order then lists tasks (a) through (h) which the Secretary may now do without instruction from the President. SECTION 1. Revocation[edit] Conspiracy theory[edit]

Exclusive: ‘The Fourth Estate is dead,’ former CIA analyst declares | Raw Story By Friday, December 10, 2010 12:53 EDT ‘The Empire’ is ‘being threatened by a slingshot in the form of a computer’ Traditional lines of communication between the people and the press have fallen into such disrepair in America that a whole new approach is necessary to challenge the military-industrial-governmental complex, according to a former CIA analyst sympathetic to WikiLeaks. “The Fourth Estate is dead,” Ray McGovern, of Veteran Intelligence Professionals for Sanity, told Raw Story in an exclusive interview. ”The Fourth Estate in his country has been captured by government and corporations, the military-industrial complex, the intelligence apparatus. Captive! McGovern explained that the term the “Fourth Estate,” known today as the news media in the US, was first coined by 18th century British statesman Edmund Burke. “That was very powerful back then,” McGovern said. McGovern said that modern people can now become informed through what he termed “The Fifth Estate.”

Wikileaks During the 2016 US presidential election campaign, WikiLeaks released emails and other documents from the Democratic National Committee and from Hillary Clinton's campaign manager, John Podesta.[14] These releases caused significant harm to the Clinton campaign,[citation needed] and have been attributed as potential contributing factors to her loss.[15] The U.S. intelligence community expressed "high confidence" that the leaked emails had been hacked by Russia and supplied to WikiLeaks, while WikiLeaks denied their source was Russia or any other state.[16] During the campaign, WikiLeaks promoted conspiracy theories about Hillary Clinton and the Democratic Party.[17][18][19] In private conversations from November 2015 that were later leaked, Julian Assange expressed a preference for a GOP victory in the 2016 election, explaining that "Dems+Media+liberals woudl [sic] then form a block to reign [sic] in their worst qualities. History Staff, name and founding Purpose Administration Financing

Three Books To Quell Your Quarter-Life Crisis iStockphoto It's 7:50 a.m., and you've indulged the snooze button for longer than you'd planned. You're not terribly excited about work, but feel better once you've thrown on your crisp, collared shirt and dress pants; donning your professional uniform still evokes a feeling of purpose, even now, two years out of college. So what if your work get-up is the only part of the job that makes you feel important? It pays the bills, it's better than living with Mom and Dad, and while you have inklings of what you might want to do — write, go to grad school, make movies, start a business — none of that feels overwhelmingly right or certain, so until it does, why rock the boat? (Even if the boat is, at best, mediocre.) So you stick with it. We are today's recent college graduates; we have virtually limitless opportunities, but that freedom can breed indecision — and complacency. All In The Timing: Fourteen Plays By David Ives, paperback 336 pages, Vintage, list price: $15.95 Sometimes A Great Notion

Buergerinitiative bedingungsloses Grundeinkommen Berlin Romance for rent For young, single city professionals, the Spring Festival holidays present many reasons to be fearful: standing in line for hours to get a train ticket, exhausting long journeys, stuffing red envelopes with cash. Arguably the No 1 reason is the prospect of turning up at home alone. Not only does it give parents the opportunity to nag - "Your classmates and cousins are married and have children. On Dec 14, Tang Yongxue stood on a street in Chengdu, capital of Sichuan province, and waved a placard that read: "Fake boyfriend needed for Spring Festival - 10,000 yuan ($1,500) for five days' work." Although dismissed as a publicity stunt by many people, the incident highlights the huge pressure on China's growing population of single urbanites to marry. Tang's tactic has been widely adopted online by desperate bachelors and bachelorettes. "It's a fun idea to help another person temporarily release the pressure of getting married," said netizen "Howe.C", who declined to give his real name.

Kabul War Diary Twenty Minutes with the President Reported by Charlie Sheen Infowars Tuesday, September 8, 2009 Related: Sheen Blasts Cowardly Corporate Media Refusal to Debate 9/11 Facts Charlie Sheen’s Video Message to President Obama Alex Jones interviews Charlie Sheen. I recently had the pleasure of sitting down with our 44th President of the United States of America, Barack Hussein Obama, while he was out promoting his health care reform initiative. Charlie Sheen – Good afternoon Mr. President Barack Obama – My pleasure, the content of your request seemed like something I should carve out a few minutes for. CS – I should point out that I voted for you, as your promises of hope and change, transparency and accountability, as well as putting government back into the hands of the American people, struck an emotional chord in me that I hadn’t felt in quite some time, perhaps ever. PBO – And I appreciate that Charlie. CS – Sir, I can’t imagine when you might find the time to actually watch my show given the measure of what you inherited.