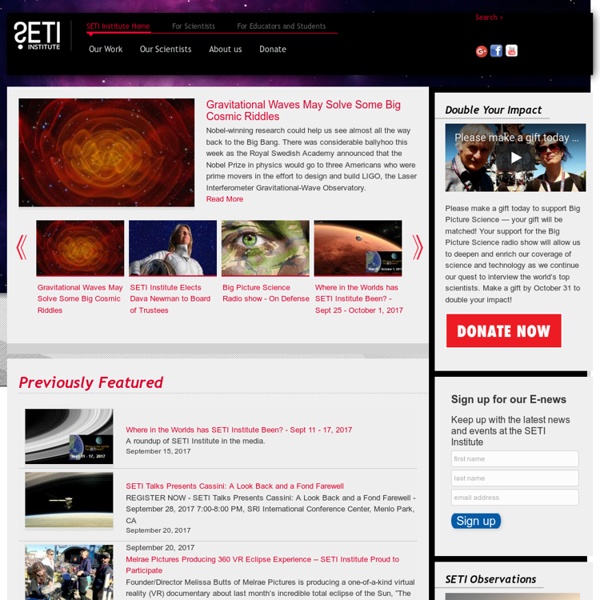 Alien Earths: why life on other worlds would be far weirder than us - The Verge Last month, the American Astronomical Society's 223rd meeting featured the announcement of a few breakthroughs: Using the Kepler space observatory, researchers had discovered a planet roughly the mass of Earth orbiting a star beyond our solar system, and with the Hubble telescope they had provided the first detailed look at the weather of a "super Earth" — a planet larger than ours but smaller than Neptune — in our galactic neighborhood. Astronomers found that GJ 1214b, like much of the Earth on any given day, is cloudy. These similarities to Earth are tantalizing. How to Grow a Blog  Last month, in preparation for my K12Online Conference presentation , I re-read Mihaly Csikszentmihalyi’s Good Business. Leadership, Flow, and the Making of Meaning . In it, he states that the experience of flow – when the person is totally immersed in an activity and genuinely enjoying the moment – comes from “the steps one takes toward attaining a goal, not from actually reaching it.” He adds that: People often miss the opportunity to enjoy what they do because they focus all their attention on the outcome, rather than savoring the steps along the way. Where does the pleasure in singing come from – finishing the song, or producing each note or phrase?

Project Daedalus – Interstellar Mission Daedalus Interstellar Probe - image copyright Adrian Mann This was a thirteen member volunteer engineering design study conducted between 1973 and 1978, to demonstrate that Interstellar travel is feasible in theory. The project related to the Fermi Paradox first postulated by the Italian Physicist Enrico Fermi in the 1940s.

Search for life suggests solar systems more habitable than ours Public release date: 3-Dec-2012 [ Print | E-mail Share ] [ Close Window ] Contact: Pam Frost GorderGorder.1@osu.edu 614-292-9475Ohio State University SAN FRANCISCO—Scattered around the Milky Way are stars that resemble our own sun—but a new study is finding that any planets orbiting those stars may very well be hotter and more dynamic than Earth. That's because the interiors of any terrestrial planets in these systems are likely warmer than Earth—up to 25 percent warmer, which would make them more geologically active and more likely to retain enough liquid water to support life, at least in its microbial form. The Alien Intervention in the World Today - Begin to Explore the New Message An [Alien] Intervention is what is happening. It is a reality of life. If you can face it, then love will become stronger. If you deny it, then fear will become stronger.

Essential Oils Are a Resource for Easing Work Related Stress Essential Oils Are a Resource for Easing Work Related Stress (Aromatherapy and Essential Oil articles are listed at the bottom of this page, and on the Essential Oil Index) Stress Created on the Job It was not too long ago in American history that a majority of citizens made their living as farmers. All that has changed now. For most Americans, including much of the world, jobs require long hours in front of a computer and far removed from soil. Hercules A November 29, 2012 Credit: NASA, ESA, S. Baum and C. O'Dea (RIT), R. New Planet 2016: Complete Coverage of Proxima b’s Discovery On Aug. 24, astronomers announced they had found a possibly Earth-like planet orbiting Proxima Centauri, the closest star to the sun. The planet, called Proxima b, is about 1.3 times the mass of Earth and is 4.22 light-years away. Main Story: Found! Potentially Earth-Like Planet at Proxima Centauri Is Closest Ever Scientists have found clear evidence of a planet around Proxima Centauri, the closest star to our sun.

Amino Acids and DNA Ingredients found in Space February 28, 2013 Contact: Dave Finley, Public Information Officer Socorro, NM (575) 835-7302 dfinley@nrao.edu 7 new Earth-like exoplanets discovered, NASA announces Talk about lucky number seven. Astronomers have discovered not one, not two, but seven Earth-sized planets orbiting a star called TRAPPIST-1. What’s more, three of them are in the habitable zone— the happy place where liquid water can exist on the surface of rocky planets, as it’s not too hot or cold. (Although liquid water could potentially exist on any of the seven, NASA said, it likes the odds on those three best.)