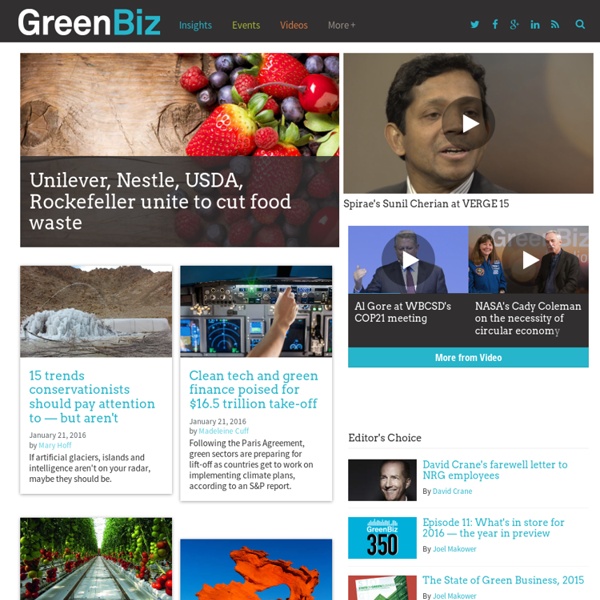 Six Transportation Trends That Will Change How We Move Since the British pioneered “road locomotives” more than a century ago, people have traveled from point to point in largely the same way. That’s changing. Six technologies are converging on the transportation industry, and investors have taken note. Venture investors put $5.7 billion into transportation businesses last year, more than twice the level of investment in the previous two years combined. Uber was the big winner, raising $3B. But other startups also raised significant funds, like GrabTaxi ($334 million), Lyft ($250 million), BlaBlaCar ($100 million), and INRIX ($65 million). Rocky Mountain Institute - Driving the Efficient Use of Resources Creating Better Buildings Achieving deeper levels of energy savings will require a scaling up of investment in energy efficiency. RMI’s new practice guide on how to calculate and present value from deep energy retrofits can help drive that investment.

Using TimeBanking to provide respite for caregivers UNDESA Population Div., World Population Prospects, the 2012 Revision, 2013 By Hannah Lobb (Intern at TimeBanks USA) WDSU News in New Orleans recently ran a story on the NOLA Timebank. In the news clip, Gretchen Zalkind, founder of NOLA Timebank, explained how timebanking is both important to the community and her personally. Towards a low-carbon future — SETIS The Information System for the European Strategic Energy Technology Plan (SET-Plan) The European Strategic Energy Technology (SET)-Plan aims to transform energy production and use in the EU with the goal of achieving EU worldwide leadership in the production of energy technological solutions capable of delivering EU 2020 and 2050 targets. The move towards a low-carbon Europe requires innovative research, effective strategic planning and an emphasis on timely and appropriate action. SET-Plan and SETIS Overview

Tesla Motors, Inc. Has a New $9 Billion Ally (NRG, TSLA) Source: Tesla Motors, Inc. Tesla Motors, (NASDAQ: TSLA ) is roaring ahead with electric vehicle innovation -- but it's not the only one. EV's need infrastructure, and Tesla Motors has found an unlikely new ally with the power to push electric vehicle feasibility to the next frontier. Here's what you need to know. Recharge RevolutionNRG Energy, (NYSE: NRG ) isn't an auto manufacturer. The Emerging Climate Technology Consensus Update (Jul 16, 2010): Expanding on a Washington Post op-ed, Vinod Khosla delineates his argument "about the deficiencies of an isolated cap-and-trade or carbon-pricing bill," and joins the climate technology consensus. Khosla writes, "If we want to make a significant difference, we need to get on the path to reducing carbon worldwide by 80 percent now by focusing on what I call "carbon reduction capacity building" -- in other words, we need to develop radical carbon-reduction technologies. A utility cap (or a carbon price) won't build capacity -- it will just increase our utility costs and decrease our manufacturing competitiveness without any increase in our technological competitiveness. Update (Jul 14, 2010): Other observers have reached similar conclusions about the faltering pollution paradigm.

Ithaca, NY Launches its Own Digital Currency to Boost Local Economy A startup local currency has just launched the Ithaca dollar in Ithaca, NY, designed to not only promote investment in local businesses and bring the community together, but to also pick up where one of the most successful alternative currency experiments in the US, the Ithaca HOURs, has left off. Ithaca Dollars The new Ithaca dollar is produced by a company called Ithacash, and for the moment is exclusively in digital form. The company founder, Scott Morris, is keen to keep local money within the local community. Local currencies “generate a lot of social and economic wealth,” said Morris to CNYcentral. The new currency has a one to one parity with the US dollar, although when an individual buys into the scheme they receive 125 Ithaca dollars for their first $100 deposit.

Opencities Open Cities challenges are designed around four themes: open data, crowdsourcing, urban labs and fiber-to-the-home. The challenges are open for individuals and organizations and aim to foster the development of products and services based on the platforms provided by the participating cities. The Innovation Challenge

Global Calculator shows how the world can 'prosper' while tackling climate change 28 Jan 2015, 07:20Simon Evans The world's population could live a prosperous, European-style lifestyle by 2050 at the same time as avoiding dangerous climate change, according to a new Global Calculator developed by the UK's Department for Energy and Climate Change (DECC). The online tool shows how global prosperity can increase, even as emissions fall by 60 per cent from current levels in line with climate targets. This feat, according to the calculator, would require a series of massive changes to how we use energy, such as a shift from fossil fuels towards nuclear and renewables, and much wider use of electric heat and transport.

Update! 15 PowerPoint Slides That Shook the Earth : Greentech Media If you attend enough cleantech events or are pitched by enough startups, you start to see the same few PowerPoint slides over and over again. Here is a collection of the best or at least the most notorious and historically significant slides in our industry. This collection has been one of our most popular pieces and I'm taking the opportunity to update some of the charts and add some additional commentary.

See Ya Later, Capitalism — the Collaborative Economy Is Taking Over — Backchannel The old model of unwieldy behemoths is giving way to a new one of collaboration. Welcome to the world of Peers. Compare the phone you had as a kid to the one in your pocket now. The first was a telephone owned by a monopoly that you used at most only minutes a day. The latter is a smart networked device you refer to hundreds of times. The difference? by Stanza. The Global soundmaps project. An online open source database of city sounds field recriding and soundmaps from around the world. Initially all sounds by Stanza you can now contribute your own found sounds. Soundcities is an online database of t The soundmaps and the database can be listened to, used in performances, or played on mobiles via wireless networks. Initially all sounds by Stanza, you can now contribute your own found sounds. Special feature if you go to the world soundmap you can click to go via KML files onto google earth. New installation uses 170 speakers in spatialised system see New Soundmaps software uses new system to mix and gather the sounds online see. Soundcities is an open online database of the thousands of sounds from around the world and you can visits the various cities and create soundmaps..

The Scientific Breakthrough That Will Completely Change The Electric Vehicle Market Tesla's Model S is the only car approaching a 300-mile range, but improving technology could change that quickly. Image owned by The Motley Fool. From an research perspective, the drive to build high-density batteries for electric vehicles is just starting. Sure, research on better batteries has been going on for years, but until the last year or two the electric-vehicle market was so small that universities, much less large battery manufacturers, didn't see it as a priority.