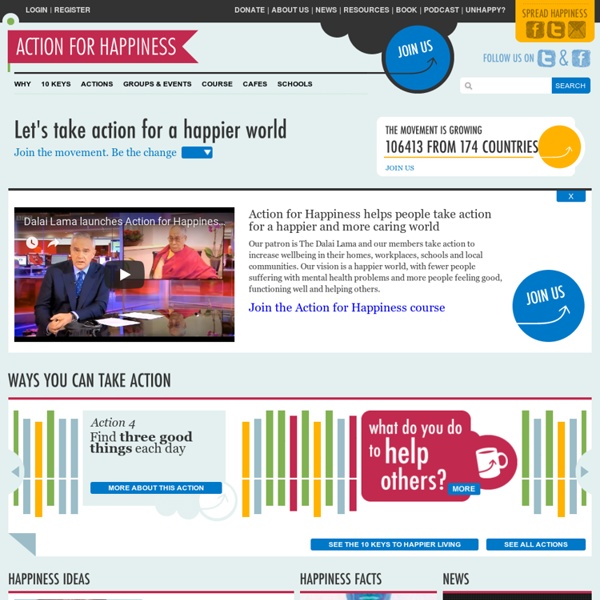 Harvard School of Public Health examined 200 separate research studies on psychological wellbeing and cardiovascular health. Optimism and positive emotion were found to provide protection against cardiovascular disease, to slow progression of heart disease and reduce risk, by around 50%, of experiencing a cardiovascular event, such as a heart attack. Recent research has shown that an 8 week mindfulness meditation class can lead to structural brain changes including increased grey-matter density in the hippocampus, known to be important for learning and memory, and in structures associated with self-awareness, compassion and introspection. Western neuroscience has now confirmed what Eastern wisdom has known for a long time: happiness is a skill we can learn. Research shows that happiness, compassion and kindness are the products of skills that can be learned and enhanced through training, thanks to the neuroplasticity of our brains.

The Ten Most Revealing Psych Experiments Psychology is the study of the human mind and mental processes in relation to human behaviors - human nature. Due to its subject matter, psychology is not considered a 'hard' science, even though psychologists do experiment and publish their findings in respected journals. Some of the experiments psychologists have conducted over the years reveal things about the way we humans think and behave that we might not want to embrace, but which can at least help keep us humble. That's something. 1. 'Lord of the Flies': Social Identity Theory

Psychology: Adult temper tantrums - by Robert Grice Robert Grice's image for: "Adult Temper Tantrums" Caption: Location: Image by: Psychology: Adult Temper Tantrums 47 Mind-Blowing Psychology-Proven Facts You Should Know About Yourself I’ve decided to start a series called 100 Things You Should Know about People. As in: 100 things you should know if you are going to design an effective and persuasive website, web application or software application. Or maybe just 100 things that everyone should know about humans! The order that I’ll present these 100 things is going to be pretty random. So the fact that this first one is first doesn’t mean that’s it’s the most important.. just that it came to mind first.

Scenario thinking (Step 1) « Divergent Ahead Introduction Ok, the boss has asked you to rally your team mates to formulate a three year fundraising strategy. What a task! The Top 10 Psychology Studies of 2010 The end of 2010 fast approaches, and I'm thrilled to have been asked by the editors of Psychology Today to write about the Top 10 psychology studies of the year. I've focused on studies that I personally feel stand out, not only as examples of great science, but even more importantly, as examples of how the science of psychology can improve our lives. Each study has a clear "take home" message, offering the reader an insight or a simple strategy they can use to reach their goals , strengthen their relationships, make better decisions, or become happier. If you extract the wisdom from these ten studies and apply them in your own life, 2011 just might be a very good year. 1) How to Break Bad Habits If you are trying to stop smoking , swearing, or chewing your nails, you have probably tried the strategy of distracting yourself - taking your mind off whatever it is you are trying not to do - to break the habit.

Psychology: Adult temper tantrums - by Elizabeth M Young Elizabeth M Young's image for: "Psychology Adult Temper Tantrums" Caption: Location: Acts of Kindness Ideas: Thirty Kind Deeds for Personal Growth Personal growth and development is a conscious plan for becoming a better human being. Kindness and generosity are easy qualities to nurture in oneself. Doing kind acts costs little or nothing, no special training is required, and there's no need to buy a self-help book for instruction. Kindness is a way of being, a way of behaving that is easily habituated and brings outstanding benefits to the giver, as described in Positive Psychology Studies on Happiness. Following are more than 30 acts of kindness that anyone can utilize.

Learned Helplessness The Misconception: If you are in a bad situation, you will do whatever you can do to escape it. The Truth: If you feel like you aren’t in control of your destiny, you will give up and accept whatever situation you are in. In 1965, a scientist named Martin Seligman started shocking dogs. He was trying to expand on the research of Pavlov – the guy who could make dogs salivate when they heard a bell ring.

Problem Solving Introduction - MindTools © iStockphoto/PerlAlexander Problems are only opportunities in work clothes. – Henry Kaiser (American industrialist) Having good strong problem solving skills can make a huge difference to your career. Problems are at the center of what many people do at work every day. Mindfulness (psychology) Mindfulness as a psychological concept is the focusing of attention and awareness, based on the concept of mindfulness in Buddhist meditation.[1] It has been popularised in the West by Jon Kabat-Zinn.[2] Despite its roots in Buddhism, mindfulness is often taught independently of religion.[3][4] Clinical psychology and psychiatry since the 1970s have developed a number of therapeutic applications based on mindfulness for helping people suffering from a variety of psychological conditions.[5] Several definitions of mindfulness have been used in modern psychology.

Locus of control In personality psychology, locus of control refers to the extent to which individuals believe that they can control events that affect them. Understanding of the concept was developed by Julian B. Rotter in 1954, and has since become an aspect of personality studies. A person's "locus" (Latin for "place" or "location") is conceptualized as either internal (the person believes they can control their life) or external (meaning they believe that their decisions and life are controlled by environmental factors which they cannot influence, or by chance or fate).[1] Individuals with a high internal locus of control believe that events in their life derive primarily from their own actions: for example, when receiving test results, people with an internal locus of control would tend to praise or blame themselves and their abilities, whereas people with an external locus of control would tend to praise or blame an external factor such as the teacher or the test.[2]

Problem Solving Skills How to develop and demonstrate your problem-solving skills We all solve problems on a daily basis, in academic situations, at work and in our day-to-day lives. Some of the problems that are typically faced by students include: Putting together an argument for an essay Debugging a computer program Dealing with an awkward customer when working part-time in a shop or restaurant Thinking about how you are going to manage your budget to keep you going until the end of term Working out why your printer won’t respond Developing a strategy to reach the next level of a computer game. Any job will also bring problems to be faced.