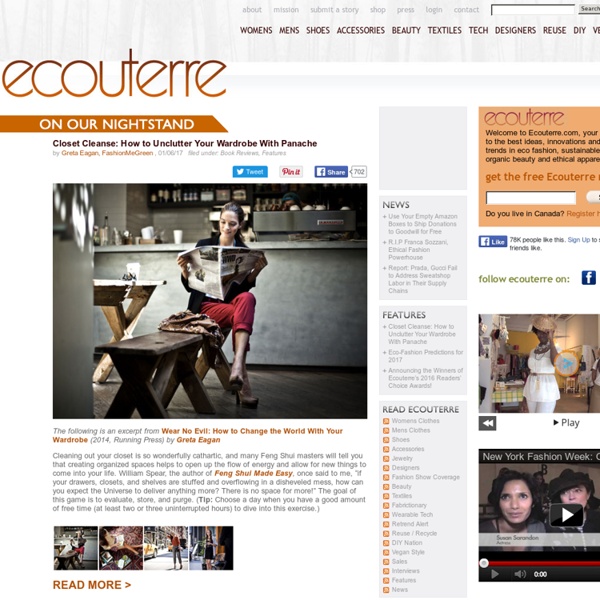 The International Princess Project doesn’t just make great loungewear. The California-based nonprofit also helps rebuild lives torn apart by sexual slavery. Handmade in an after-care facility in India, its “Punjammies” offer formerly trafficked women and girls a fresh start, a place to heal, and a new trade. Each woman receives a higher-than-fair wage, housing options, medical care, and where applicable, education for her children. Even better: 100 percent of the company’s proceeds are reinvested in the program, allowing more women and girls a chance at a new life. Want to be part of this narrative of hope?

CxC - Childfree by Choice — Faith Popcorn's BrainReserve Redefining Tomorrow’s Family The nuclear family is detonating “As American as Mom and apple pie,” the saying used to go. But now, a societal tsunami is underway, changing the way we see motherhood and questioning its primacy in the fabric of our culture. The U.S. birthrate has plunged to unprecedented lows: In the 1970s, 1 in 10 American women were childless.

British Fashion Council - Estethica - About Estethica - Introduction to esthetica The British Fashion Council founded Estethica to showcase the growing movement of cutting edge designers committed to working eco sustainably. Estethica has evolved to become the hub of London's ethical fashion industry. The success of this initiative, the internationally strongest of its kind, is evident in its rapid growth. Blackfoot Indians (Blackfeet, Siksika) Blackfoot chief Father and son Is the name of the tribe "Blackfoot" or "Blackfeet"? Where did this name come from?

Surface Design + Inspiration Interiors | Pillow Talk It seems like these days the throw pillow craze has reached new heights. No longer are we looking for our couch decorations just to blend in and stay still, we have begun to ask our couch art to positively pulse with creativity. And that’s where artists like Tyler Spangler step in. His collection of vibrant and color flooded art prints are available as throw pillows on Society 6, in case your couch is looking a bit plain. s Trend Briefing covering "7 Consumer Trends To Run With In 2014" Growing numbers of consumers can no longer escape an awareness of the damage done by their consumption: to the planet, society, or themselves. But a mixture of indulgence, addiction and conditioning mean that most can’t substantially change their consumption habits. The result? A never-ending guilt spiral.

The Detox Catwalk the detox catwalk It’s time to find out which clothing companies are walking the talk to a toxic-free future. Over the past 24 months hundreds of thousands of activists, fashionistas, bloggers and consumers came together to call for fashion without pollution. From record-breaking strip teases to social media storms, people power brought about Detox commitments from 18 major textile companies.

Satin Flower Headbands Satin Flower Headbands Remember this post about the pettiskirt? Well, many of you asked about the headband……. I have posted about the satin flowers before…….hmmmm, maybe a year or so ago, but didn’t give a step-by-step and didn’t show it on a headband. But these little satin flowers really are a fun little thing to put on anything. Clothing, bags, headbands, etc. Five graphs that explain the EU 2030 energy and climate deal David Cameron joins other EU leaders on Thursday to decide a new set of energy and climate targets for Europe for the first time in half a decade. On the table are three new targets for 2030. The big one is a binding goal of getting Europe’s emissions down 40% on 1990 levels, a cut that international observers and environmentalists say is unambitious. Here’s the chart that explains why – the pink line is what the bloc’s 28 countries are already on track for, and the green is where emissions should end up with the target:

International Trend Interpretation Agency Babyboomers are the biggest, wealthiest and most dominant generation. They are still very active, especially when compared to the generations before them. Kids start moving out, careers and working hours are toned down and self exploration is high. They have time, money and the network to optimally profit from their new free time.