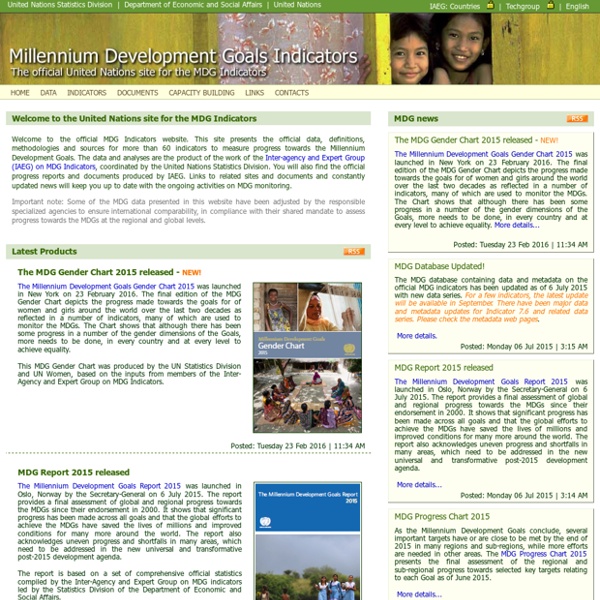 The Millennium Development Goals Report 2013 was launched in Geneva by the Secretary-General on 1 July 2013. The report presents the yearly assessment of global and regional progress towards the MDGs. With the deadline for the MDGs on the horizon, this year's report examines where the targets have been met and where redoubled efforts are needed urgently to accelerate the progress. It also reveals that our attention needs to focus on disparities across geographical areas and population groups within countries. The report is based on comprehensive official statistics compiled by the Inter-Agency and Expert Group on MDG indicators led by the Statistics Division of the Department of Economic and Social Affairs. The report is available in all UN languages.

Analyzing the Concept of Planetary Boundaries from a Strategic Sustainability Perspective: How Does Humanity Avoid Tipping the Planet? Copyright © 2013 by the author(s). Published here under license by The Resilience Alliance. Go to the pdf version of this article The following is the established format for referencing this article: Robèrt, K. Millennium Development Goals Report 2012 - United Nations Department of Economic and Social Affairs The report presents the yearly assessment of global progress towards the MDGs, highlighting several milestones – three important MDG targets have been met well ahead of the target date of 2015. The report says that meeting the remaining targets, while challenging, remain possible – but only if Governments do not waiver from their commitments made over a decade ago. Based on a master set of data compiled by the Inter-Agency and Expert Group on MDG indicators led by DESA’s Statistics Division, the 2012 report outlines gains in poverty reduction and access to safe drinking water, and an improvement in the lives of slums dwellers in urban areas.

Sustainable city A sustainable city, or eco-city is a city designed with consideration of environmental impact, inhabited by people dedicated to minimization of required inputs of energy, water and food, and waste output of heat, air pollution - CO2, methane, and water pollution. Richard Register first coined the term "ecocity" in his 1987 book, Ecocity Berkeley: Building Cities for a Healthy Future.[1] Other leading figures who envisioned the sustainable city are architect Paul F Downton, who later founded the company Ecopolis Pty Ltd, and authors Timothy Beatley and Steffen Lehmann,[2] who have written extensively on the subject. The field of industrial ecology is sometimes used in planning these cities. There remains no completely agreed upon definition for what a sustainable city should be or completely agreed upon paradigm for what components should be included. It is estimated that over 50%[4] of the world’s population now lives in cities and urban areas.

The Social Dimension of Strategic Sustainable Development (Licentiate by Merlina Missimer) - Electronic Research Archive @ Blekinge Institute of Technology (BTH) Sustainable development most prominently entered the global political arena in 1987 in a report from the United Nations Commission on Environment and Development, also known as the Brundtland report. In response to the concept of sustainable development, a vast array of ideas, concepts, methods and tools to aid organizations and governments in addressing the socio-ecological problems has been developed. Though helpful in many contexts, the multitude of such support also risks creating confusion, not the least since there is no generally endorsed overriding and operational definition of sustainability.

Millennium Development Goals In September 2000, 189 member states of the United Nations came together at the Millennium Summit and adopted the Millennium Declaration, including commitments to poverty eradication, development, and protecting the environment. Many of these commitments were drawn from the agreements and resolutions of world conferences and summits organized by the United Nations during the preceding decade. A year later the UN Secretary General’s Road Map for implementing the Millennium Declaration formally unveiled eight goals, supported by 18 quantified and time-bound targets and 48 indicators, which became known as the Millennium Development Goals (MDGs). The MDGs focus the efforts of the world community on achieving significant, measurable improvements in people's lives by the year 2015. The eight MDGs listed below guide the efforts of virtually all organizations working in development and have been commonly accepted as a framework for measuring development progress: See also

Data science We’ve all heard it: according to Hal Varian, statistics is the next sexy job. Five years ago, in What is Web 2.0, Tim O’Reilly said that “data is the next Intel Inside.” But what does that statement mean? Why do we suddenly care about statistics and about data? The Great Transition “There is enough food, water, energy and natural resources on the planet for every human being. There is just not enough money to pay for it. There never was, and there never will be. Together humanity is marching forward towards a new world, one of absolute equality for every human being, where the illusion known as money is discarded, swept aside for a true currency called love”. - Gary Mitchell Weinstein by Gary Mitchell Weinstein Contributor