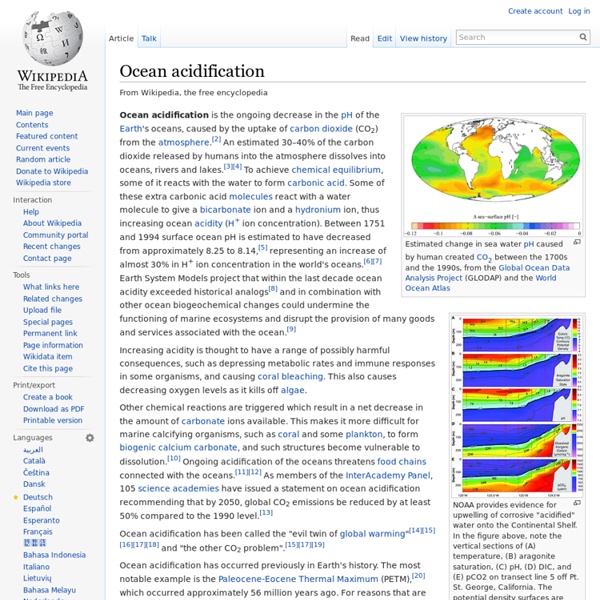 NOAA provides evidence for upwelling of corrosive "acidified" water onto the Continental Shelf. In the figure above, note the vertical sections of (A) temperature, (B) aragonite saturation, (C) pH, (D) DIC, and (E) pCO2 on transect line 5 off Pt. St. George, California. Ocean acidification is the ongoing decrease in the pH of the Earth's oceans, caused by the uptake of carbon dioxide (CO2) from the atmosphere.[2] An estimated 30–40% of the carbon dioxide released by humans into the atmosphere dissolves into oceans, rivers and lakes.[3][4] To achieve chemical equilibrium, some of it reacts with the water to form carbonic acid. Increasing acidity is thought to have a range of possibly harmful consequences, such as depressing metabolic rates and immune responses in some organisms, and causing coral bleaching. Other chemical reactions are triggered which result in a net decrease in the amount of carbonate ions available. Ocean acidification has occurred previously in Earth's history.

Why the world is running out of helium - Science - News Scientists have warned that the world's most commonly used inert gas is being depleted at an astonishing rate because of a law passed in the United States in 1996 which has effectively made helium too cheap to recycle. The law stipulates that the US National Helium Reserve, which is kept in a disused underground gas field near Amarillo, Texas – by far the biggest store of helium in the world – must all be sold off by 2015, irrespective of the market price. The experts warn that the world could run out of helium within 25 to 30 years, potentially spelling disaster for hospitals, whose MRI scanners are cooled by the gas in liquid form, and anti-terrorist authorities who rely on helium for their radiation monitors, as well as the millions of children who love to watch their helium-filled balloons float into the sky. Liquid helium is critical for cooling cooling infrared detectors, nuclear reactors and the machinery of wind tunnels. What helium is used for *Airships *MRI scanners *Rockets *Dating

Can civilisation reboot without fossil fuels? – Lewis Dartnell Imagine that the world as we know it ends tomorrow. There’s a global catastrophe: a pandemic virus, an asteroid strike, or perhaps a nuclear holocaust. The vast majority of the human race perishes. Our civilisation collapses. The post-apocalyptic survivors find themselves in a devastated world of decaying, deserted cities and roving gangs of bandits looting and taking by force. Bad as things sound, that’s not the end for humanity. Popular now Could we make our home on a rogue planet without a Sun? Should we be suspicious of the Anthropocene idea? What can we do to save the Universe from certain death? Let’s make the basis of this thought experiment a little more specific. So, would a society starting over on a planet stripped of its fossil fuel deposits have the chance to progress through its own Industrial Revolution? It’s easy to underestimate our current dependence on fossil fuels. In fact, the problem is even worse than that. But my topic here is not what we should do now. Related video

Solutions Summit These Skyscrapers Will Clean Pollution From The Surrounding Water And Air Two towers almost a kilometer high have been announced for Wuhan, China. But they won't just be special because of their height - the towers will actually clean the polluted lake next to which they will sit. At 830m high the Burj Khalifa has been the world's tallest building since 2010. Tall buildings require a lot of power, particularly for lifts, but Adele Peters of business magazine Fast Company reports “Wind turbines, lightweight solar cladding, and hydrogen fuel cells running on the buildings’ waste will generate all of the power used by the towers, plus a little extra for the rest of the neighbourhood.” Moreover, the designers propose to tackle Wuhan's notorious pollution. “The water goes up through a series of filters,” explains architect Laurie Chetwood. Only the taller tower will have a wind turbine, allowing it to not only meet its own energy needs, but supply power to the other tower as well.

Further evidence that nature is not the opposite of technology Clearly they should grind up the xylem into pure water, and dilute it several times over until the whole of the water as absorbed the cleansing essence of the wood. Now that's real science. Now you are on the right track. But it still leaves the essence of the wood on the particles of the water. That is even more deadly because now the toxins have been transferred to all of the water in your solution, not just what you wanted to drink. Because of you you just killed everyone on the planet. Everyone knows that hand washing gets rid of all of the germs on your hand. Simple really. /s /hypocrisy /iwouldnotbersurprisedsomeoneactuallythoughtofthisasarealthing

The economic impacts of carbon pricing When you start talking about economics, the eyes of many a climate science geek (present company included) begin to glaze over. However, this is a critical subject. When you ask a climate contrarian why they won't support climate action just in case they are wrong, the contrarians will invariably assert that pricing and reducing carbon emissions will harm the economy. However, this assertion is in direct contradiction with the body of climate economics literature, which actually shows the opposite is true. For example, a new paper by Johnson and Hope 2012 evaluates the overall cost of carbon emissions via climate change damages, and finds that when these costs are taken into consideration: The social cost of carbon (SCC) is effectively an estimate of the direct effects of carbon emissions on the economy - it estimates how much damage our emissions cause via climate change, or how much it will cost us to adapt to climate change. Johnson and Hope 2012 (JH12) notes that the U.S. Summary

Overshoot Day: Living too Large on a Finite Planet | Global Conservation Jon Hoekstra is chief scientist for the World Wildlife Fund (WWF). This article is adapted from one that first appeared on Hoekstra's WWF blog, Science Driven. He contributed this article to LiveScience's Expert Voices: Op-Ed & Insights. August 20, 2013, marks Earth Overshoot day— the estimated date when the people on Earth have used up the planet's annual supply of renewable natural resources and reached its carbon-absorbing capacity. After that point, people are using more than the planet can sustain. It's a one-day reminder of a year-round problem — humans are living too large on a finite planet. You probably have a general sense of why. According to the Global Footprint Network, Earth Overshoot day became an issue around 1975. Before that, people's ecological footprint — measured as the area required to supply the food, fish, fiber and energy we consume every year — was within what the planet could sustain. By 2050, the human population is projected to be about 9 billion people.