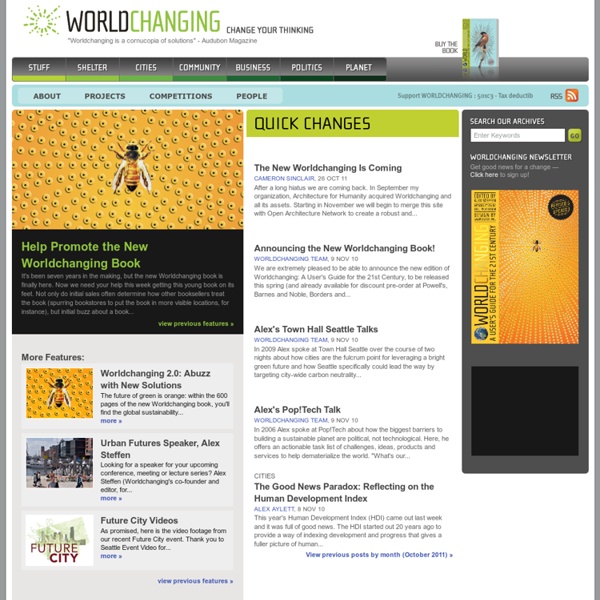 The One-Straw Revolution Masanobu Fukuoka (1913-2008) was a farmer and philosopher who was born and raised on the Japanese island of Shikoku. He studied plant pathology and spent several years working as a customs inspector in Yokohama. While working there, at the age of 25, he had an inspiration that changed his life. He decided to quit his job, return to his home village and put his ideas into practice by applying them to agriculture. Over the next 65 years he worked to develop a system of natural farming that demonstrated the insight he was given as a young man, believing that it could be of great benefit to the world. He did not plow his fields, used no agricultural chemicals or prepared fertilizers, did not flood his rice fields as farmers have done in Asia for centuries, and yet his yields equaled or surpassed the most productive farms in Japan.

Environmental Biology Sequence - Ecosystems Overview Roles of Organisms Energy Flow Through Ecosystems Food Chains and Webs Pyramids - Biological Magnification Antarctica Sea Creatures - Bizarre Sea Creatures of Antarctica Also called a sea cucumber or Holothuroid, this truly deserves the name sea pig. This was one of the most common and abundant animals caught off the coast of Antarctica by the international research team aboard the BAS Royal Research Ship James Clark Ross. Sea cucumbers are important in processing the sediment (like earthworms on land) but their numbers worldwide have been threatened by recent fisheries.

Digital Designs for Physical Objects Days Remaining: 0 Could you live on Mars? Certainly not without great design and engineering. That's why we, in cooperation with NASA's Jet Propulsion Laboratory, are excited to present the Makerbot Mars Base Challenge. Taking Mars’ extreme cold, high radiation levels, lack of oxygen, and frequent dust storms into consideration, design a utilitarian Mars base that can withstand the elements and maybe even make you feel at home, despite being 140 million miles away from Earth, on average. Learn more about Mars and what kind of home could actually sustain life there on {*style:<a href=' Imagine Mars website{*style:</a>*}.Upload your design to Thingiverse with the tag #MakerBotMars between May 30th and June 12th.

The Earth Bank: A Living Building System Vertical gardening is a fun, creative way to grow plants in urban spaces! Below is just a sample of what you can create with ready-to-go planters and kits. The first few images are of GroVert Vertical Gardening Systems by Bright Green. There are two different sized panels (10 and 45), and each are planted, then hung on the wall using their included mounting bracket. The last images are of living walls made from felt pockets.

Nature’s matrix: Linking agriculture, conservation and food sovereignty An important book argues that conservationists who focus on creating nature preserves are undermining their own cause. To truly protect biodiversity, environmentalists must support the global struggle of peasant farmers for human rights, land, and sustainable agriculture. NATURE’S MATRIX Linking Agriculture, Conservation and Food Sovereignty by Ivette Perfecto,John Vandermeer,and Angus Wright Earthscan, 2009 reviewed by Ian Angus Japanese breakthrough will make wind power cheaper than nuclear NOTE: Some major wind projects like the proposed TWE Carbon Valley project in Wyoming are already pricing in significantly lower than coal power -- $80 per MWh for wind versus $90 per MWh for coal -- and that is without government subsidies using today's wind turbine technology. The International Clean Energy Analysis (ICEA) gateway estimates that the U.S. possesses 2.2 million km2 of high wind potential (Class 3-7 winds) — about 850,000 square miles of land that could yield high levels of wind energy. This makes the U.S. something of a Saudi Arabia for wind energy, ranked third in the world for total wind energy potential. The United States uses about 26.6 billion MWh's, so at the above rate we could satisfy a full one-third of our total annual energy needs. Now what if a breakthrough came along that potentially tripled the energy output of those turbines?

FingerReader Roy Shilkrot, Jochen Huber, Meng Ee Wong, Pattie Maes, and Suranga Chandima Nanayakkara. "FingerReader: a wearable device to explore text reading on the go". To appear in the proceedings of the International Conference on Human Factors in Computing Systems (CHI). 2015 ACM [PDF] Roy Shilkrot, Jochen Huber, Connie K. Liu, Pattie Maes and Suranga Nanayakkara. "FingerReader: A Wearable Device to Support Text-Reading on the Go". Precautionary List Home Page What is this about? It is our belief that products that are harmful to humans, animals, and the environment should not be used in our projects, and to that end, we seek to inform our clients of available alternatives so as to permit them to make informed decisions. The substances listed all have been classified by multiple regulatory entities as being detrimental to the health of humans and the environment. These lists are evolving documents that will be updated as new relevant data emerges. Rather than use products which contain these substances, we will seek out alternatives, in keeping with the precautionary principle, in an effort to be responsive to reported health effects, and thereby to protect our health and the health of future generations too. These lists are compilations of available data, and are not an endorsement of any of the referenced studies, articles, or data.

Cradle to Cradle: Remaking the Way We Make Things One of the most influential recent books on design and environmentalism.” —Alice Rawsthorn, The New York Times [McDonough] point[s] to a path out of the seemingly un-winnable trench war between conservation and commerce.” —James Surowiecki, The New Yorker A rare example of the ‘inspirational’ book that actually is.”