Queen Nefertiti may hide inside Tutankhamun’s tomb. Is this Nefertiti? 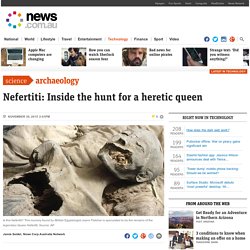 This mummy found by /British Egyptologist Joann Fletcher is speculated to be the remains of the legendary Queen Nefertiti. Source: AP Jamie SeidelNews Corp Australia Network STRANGE echoes, indentations and touched-up artwork inside Tutankhamun’s famous tomb have revealed secret chambers that may belong to his notorious mother — Queen Nefertiti.

She was Egypt’s most beautiful woman. Together, they attempted to change the world with their notion of a single god. But when God-King died, Egypt’s nobility set about erasing the heretical couple from history. Nefertiti once again soared to fame a century ago when her incredibly fine featured face was pulled from Egypt’s desert sands. Exquisite art ... It has since become one of the most copied works of art in the world. The queen is an object of fascination, both for her beauty and the incredibly complex family and religious politics in which she played a pivotal part. Deep scan ... Will it lead to Nefertiti? Play Video. Nefertiti Still Missing: King Tut's Tomb Shows No Hidden Chambers. Radar scans conducted by a National Geographic team have found that there are no hidden chambers in Tutankhamun's tomb, disproving a claim that the secret grave of Queen Nefertiti lurks behind the walls. 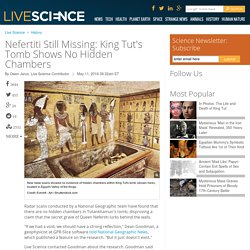 "If we had a void, we should have a strong reflection," Dean Goodman, a geophysicist at GPR-Slice software told National Geographic News, which published a feature on the research. "But it just doesn't exist. " Live Science contacted Goodman about the research. Goodman said that though he prepared a response, a nondisclosure agreement with the National Geographic Society meant that he needed the society's permission to release that statement. [See Photos of King Tut's Burial and Radar Scans] The society refused this permission, sending a statement to Live Science this morning (May 10), explaining that the society's agreement with Egypt's antiquities ministry prevents it from granting media access. 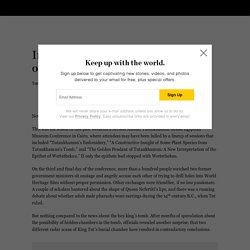 This was the lesson of this past weekend’s Second Annual Tutankhamun Grand Egyptian Museum Conference in Cairo, where attendees may have been lulled by a lineup of sessions that included “Tutankhamun’s Embroidery,” “A Constructive Insight of Some Plant Species from Tutankhamun’s Tomb,” and “The Golden Pendant of Tutankhamun: A New Interpretation of the Epithet of Wertethekau.” If only the epithets had stopped with Wertethekau. On the third and final day of the conference, more than a hundred people watched two former government ministers sit onstage and angrily accuse each other of trying to drill holes into World Heritage Sites without proper permission. 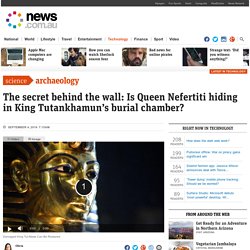 Photo: Getty Dr Chris Naunton says it’s not completely crazy to think there could be a hidden doorway in the Egyptian pharaoh’s tomb. IT’S probably one of the world’s greatest mysteries. Is Egyptian pharaoh Tutankhamun buried alone, or is there a secret lurking behind the walls of his burial chamber? The Egyptian king is one of the most famous, yet in the Valley of the Kings his tomb appears to be minute, which created intrigue among Egyptologists. Research from Egyptologist Dr Nicholas Reeves suggests a wall in the Egyptian king’s burial chamber is a secret door that leads to a whole new passage and to the missing body and intact tomb of Queen Nefertiti.

Egyptologist and director of the Egypt Exploration Society Dr Christopher Naunton doesn’t know if he believes it to be true, but he thinks the theory should be explored. King Tut tomb: Archaeologists clash over ‘secret chambers’ theory. Play Video Sorry, this video is no longer available Radar scans suggest a hidden tomb sits behind Egyptian pharoah King Tutankhamun's tomb. 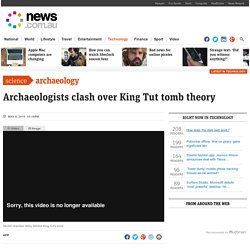 Some doubt has been raised over the existence of the secret chambers. (Photo: Kenneth Garrett). ARCHAEOLOGISTS can’t seem to agree on the possible existence of a secret chamber in King Tut’s tomb, in a mystery that has piqued national interest in Egypt. Egyptian Antiquities Minister Khaled al-Anani said on Sunday new technology is needed to determine whether Tutankhamun’s tomb contained hidden chambers which a British archeologist believes may hide queen Nefertiti’s remains. Anani spoke to archaeologists and reporters at a conference in Cairo dedicated to King Tutankhamun and his world-famous golden funerary mask. The mood at Sunday’s conference was sceptical months after former minister Mamduh Damati said the secret chambers probably existed, raising expectations of another historical find. Damati himself said more tests were needed.