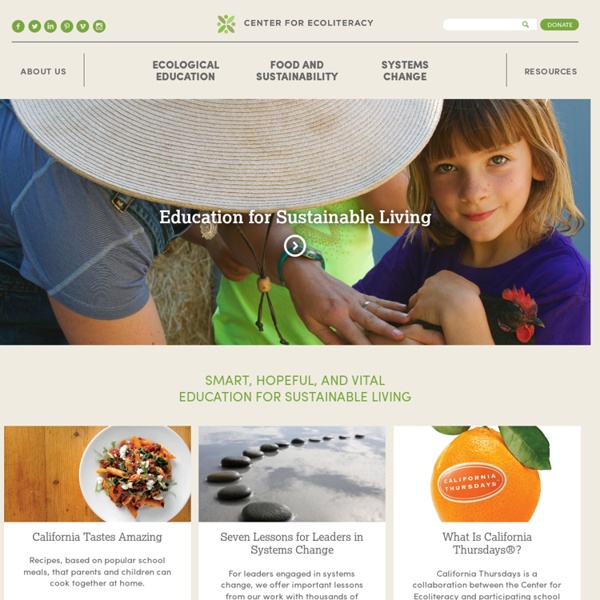 Sustainable Development – Earth Charter Initiative Principle 14 of the Earth Charter emphasizes the importance of “Integrating into…education and life-long learning the knowledge, values, and skills needed for a sustainable way of life”. Education is fundamental to the mission of Earth Charter Initiative. ECI has therefore created the Earth Charter Center for Education for Sustainable Development at the University for Peace in Costa Rica. The Center deepens students’ and program participants’ understanding of sustainability vision and practice, and build the knowledge, skills, attitudes, and values they need to shape a sustainable future.

International Biodiversity Day: How the Svalbard Seed Vault defends plants against future outbreaks More recently, wheat rust—a set of fungal diseases known as the “polio of agriculture”—have been slowed by resistant genes found in the wheat collection stored and bred at CIMMYT, the International Maize and Wheat Improvement Center in El Batán, Mexico. The fungus has been around since the mid-1900s but, in 1999, a “super-race” of wheat rust surfaced in Uganda. That strain “had the ability to take out most of the resistance that was being used in wheat throughout the world,” CIMMYT senior scientist Dave Hodson explained, on the Cornell University podcast Plantopia, “It was capable of complete crop loss in just a few weeks.”

A Systems Perspective Systems thinking presents a different lens through which to understand the complexity of the world. Thinking systemically entails a number of shifts in perception, which lead to different ways to teach, and to different ways to organize institutions and society. These shifts offer opportunities for teachers to present material in more holistic ways, in context rather than as isolated facts, consistent with the way students encounter the natural and social worlds in their own experience.

The Trials & Travails Of Sheltering Suburban Mom Ah, we all know the type: the nosy next-door neighbor with a panache for telling you your own business (and everyone else’s, for that matter). The type of person who somehow missed the page about judgment in the Bible even though she claims to be a born-again Christian. And so we present to you the Sheltering Suburban Mom meme: Proposal for MIT Global Environment Initiative seeks public comment As the world’s population continues to expand, our natural resources will become increasingly strained. In an effort to find sustainable solutions for the planet’s growing population while minimizing environmental impacts, MIT’s Environmental Research Council (ERC) has put forward a detailed implementation plan to establish a Global Environmental Initiative to complement the MIT Energy Initiative (MITEI). The interdisciplinary, faculty-led council presented the plan to the MIT community last Thursday in a forum held at the Kirsch Auditorium in the Stata Center. Council members outlined an initiative that would bring together MIT’s “core strengths” across campus to help solve the world’s pressing environmental challenges, from mitigating climate change to curbing contamination and maintaining fresh water supplies. In the areas of climate and oceans, MIT already has a strong foundation of interdisciplinary collaboration.

World Game World Game, sometimes called the World Peace Game, is an educational simulation developed by Buckminster Fuller in 1961 to help create solutions to overpopulation and the uneven distribution of global resources. This alternative to war games uses Fuller's Dymaxion map and requires a group of players to cooperatively solve a set of metaphorical scenarios, thus challenging the dominant nation-state perspective with a more wholistic "total world" view. The idea was to "make the world work for 100% of humanity in the shortest possible time through spontaneous cooperation without ecological damage or disadvantage to anyone",[1] thus increasing the quality of life for all people. History and use[edit] Fuller first publicly proposed the concept as the core curriculum at the (then new) Southern Illinois University Edwardsville. He proposed it again in 1964 for the 1967 International and Universal Exposition in Montreal, Quebec.

Core Ecological Concepts Understanding the patterns and processes by which nature sustains life is central to ecological literacy. Fritjof Capra says that these may be called principles of ecology, principles of sustainability, principles of community, or even the basic facts of life. In our work with teachers and schools, the Center for Ecoliteracy has identified six of these principles that are important for students to understand and be able to apply to the real world. Recognizing these core ecological concepts is one of the important results of our guiding principle, "Nature Is Our Teacher," which is described in the "Explore" section of this website. We present them again here for the guidance they can provide to teachers as they plan lessons as part of schooling for sustainability. NetworksAll living things in an ecosystem are interconnected through networks of relationship.

World Game In the 1960's Buckminster Fuller proposed a “great logistics game” and “world peace game” (later shortened to simply, the “World Game”) that was intended to be a tool that would facilitate a comprehensive, anticipatory, design science approach to the problems of the world. The use of “world” in the title obviously refers to Fuller's global perspective and his contention that we now need a systems approach that deals with the world as a whole, and not a piece meal approach that tackles our problems in what he called a “local focus hocus pocus” manner. The entire world is now the relevant unit of analysis, not the city, state or nation. For this reason, World Game programming generally used Fuller's Dymaxion Map for the plotting of resources, trends, and scenarios essential for playing.

What System? The pop-culture application of systems thinking and chaos theory is described as the Butterfly Effect -- how tiny variations can affect giant and complex systems, like weather patterns. The term "Butterfly Effect" suggests that wing movements of a butterfly might have significant repercussions on wind strength and conditions throughout the weather systems of the world, and theoretically, could cause tornadoes halfway around the world. The implication? The prediction of any large system's behavior is virtually impossible without accounting for a multitude of tiny factors -- surely too many to account for -- any one of which might have a minute but significant effect on the system.

New Opportunity to Join the Zapatista Freedom School A few days ago, Zapatista Subcomandante Moises sent a communiqué with updates about the upcoming Zapatista Freedom School, to be held from August 12-16 in the Zapatista Autonomous Communities (“caracoles”, which is the Spanish name of “snails’ conchs” referring to the spiral of History). A total of 1,700 students from across all the continents will be attending, from South Africa to Canada, as far away to Brazil or Germany. Due to the high demand, new School cycles will be opened in December. Earth Has Less Water Than You Think Want to stay on top of all the space news? Follow @universetoday on Twitter All the water on Earth would fit into a sphere 860 miles (1,385 km) wide. (Jack Cook/WHOI/USGS) If you were to take all of the water on Earth — all of the fresh water, sea water, ground water, water vapor and water inside our bodies — take all of it and somehow collect it into a single, giant sphere of liquid, how big do you think it would be?

Glossary: Systems Thinking Definition Lack of systems thinking produces a mental model based mostly on what you can physically see. This tends to give a shallow understanding of the way a system works. For example, when pouring a glass of water we usually think only in terms of turning on the faucet until the glass is full, and then turning it off. ucation Resources Information Center NotesFAQContact Us Collection Thesaurus AdvancedSearch Tips