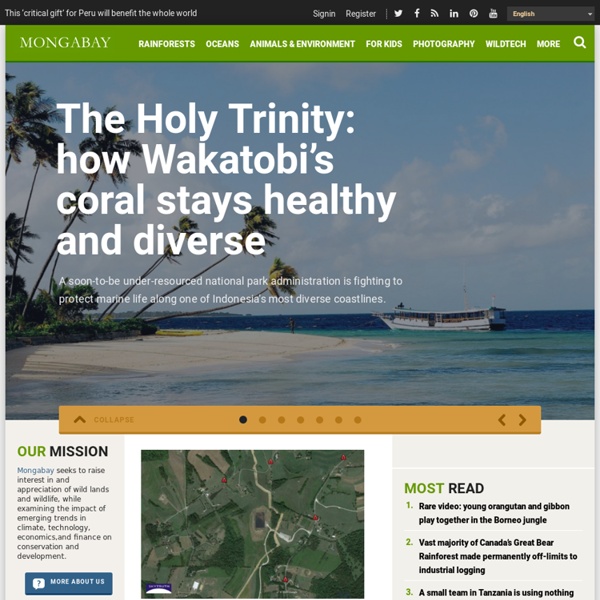 Behind of the scenes of Showtime's blockbuster series on climate change (04/18/2014) For years climate change activists and environmentalists have been clamoring for a high-profile, high-impact TV series about climate change to make Americans more aware of an issue that will affect billions of people around the globe in coming decades. This week they finally got it when Showtime released the first episode of Years of Living Dangerously, a big-budget TV series featuring a number of Hollywood's biggest stars as reporters and corespondents. Rainforests on fire: climate change is pushing the Amazon over the edge (04/18/2014) From 1999-2010, nearly three percent of the Amazon rainforest burned, and climate forecasts indicate dry conditions conducive to fire will only become more commonplace in the future.

Why are we a nation of tree-huggers? 3 February 2011Last updated at 15:44 By Jon Kelly BBC News Magazine Plans to transfer ownership of many public forests in England have provoked a huge row. But why are we so protective of our woodlands? It's about the rustling of the leaves and the crunch of twigs underfoot. It's the sensation of the rough bark on your hands and the light dappling into a clearing. New global maps detail human-caused ocean acidification A team of scientists has published the most comprehensive picture yet of how acidity levels vary across the world's oceans, providing a benchmark for years to come as enormous amounts of human-caused carbon emissions continue to wind up at sea. "We have established a global standard for future changes to be measured," said Taro Takahashi, a geochemist at Columbia's Lamont-Doherty Earth Observatory who published the maps with his colleagues in the August issue of the journal Marine Chemistry. The maps provide a monthly look at how ocean acidity rises and falls by season and geographic location, along with saturation levels of calcium carbonate minerals used by shell-building organisms. The maps use 2005 as a reference year and draw on four decades of measurements by Lamont-Doherty scientists and others. The oceans have taken up a quarter of the carbon dioxide humans have put in the atmosphere over the last two hundred years.

Convention on Biological Diversity (CBD) - National CHM for the Republic of Zambia Zambia has ratified more than twenty (20) Global Environmental Conventions that play an important role in influencing the country's policies, laws and actions so as to attain sustainable socio-economic development through the environment and natural resources management. In order for key players in environmental protection and natural resources management including the local communities to acquire basic knowledge and understanding on these conventions, there is need to disseminate issues related to different conventions to which Zambia is a party. Zambia lies at the heart of the Miombo Ecoregion and it is listed as the World Wide Fund (WWF) Global 2000 Ecoregion because of its high species richness. The Miombo Ecoregion supports important populations of fauna, particularly large mammals. Zambia is floristically diverse and has 8,500 plant species, of which about 54% are endemic. According to WWF-SARPO (2002) there are 26 areas of special biodiversity importance within the Ecoregion.

Data-driven Insights on the California Drought (12/8/2014 8:33:13 AM) A newly released interactive California Drought visualization website aims to provide the public with atlas-like, state-wide coverage of the drought and a timeline of its impacts on water resources. The U.S. Geological Survey developed the interactive website as part of the federal government's Open Water Data Initiative. The drought visualization page features high-tech graphics that illustrate the effect of drought on regional reservoir storage from 2011-2014.  [Official website] »  KNX  » What is KNX? KNX: Introduction More convenience, more safety, higher energy savings: The demand for building management systems is continuously increasing. Whether in a single-family house or in an office complex, the demand for comfort and versatility in the management of air-conditioning, lighting and access control systems is growing. At the same time, the efficient use of energy is becoming increasingly important. More convenience and safety coupled with lower energy consumption can however only be achieved by intelligent control and monitoring of all products involved.

Dutch Study Says Wi-Fi Makes Trees Sick A recent study by Dutch scientists found that Wi-Fi radiation could be responsible for sickness in urban-populated trees. Image: baltimoresun What would life be like without Wi-Fi, bringer of high speed internet access? Probably pretty inconvenient considering that millions of computer users around the world use it at home, at work and other public places to get online. Having access to wireless networks makes our lives easier, but according to a Dutch study from Wageningen University, this access may be compromising the health of trees.

Design Science Primer Comprehensive, anticipatory design science is “the effective application of the principles of science to the conscious design of our total environment in order to help make the Earth’s finite resources meet the needs of all of humanity without disrupting the ecological processes of the planet.” The term “design science” was coined by Buckminster Fuller to characterize his unique approach to solving complex problems. A number of important features characterize Fuller’s design science approach. As a process, it must be comprehensive - driven by holistic systems thinking; it must be anticipatory - needs driven and future oriented; it must be aligned with nature - reflecting nature’s underlying processes and principles; and, it must be science based - subject to rigorous concepts, testing and empirical verification. A world that works for 100% of humanity

Lists of environmental topics The natural environment, commonly referred to simply as the environment, is all living and non-living things that occur naturally on Earth or some part of it (e.g. the natural environment in a country). This includes complete ecological units that function as natural systems without massive human intervention, including all vegetation, animals, microorganisms, rocks, atmosphere and natural phenomena that occur within their boundaries. And it includes universal natural resources and physical phenomena that lack clear-cut boundaries, such as air, water, and climate, as well as energy, radiation, electric charge, and magnetism, not originating from human activity. General lists[edit] Lists of countries[edit] Global Justice Ecology Project: GlobalJusticeEcology.org , Hinesburg, VT Israeli biotech firm says its modified eucalyptus trees can displace the fossil fuel industry by John Vidal, environment editor, The Guardian, Thursday 15 November 2012 GM eucalyptus trees at five-and-a-half years old, grown in a field trial. FutureGene claims GM species grow thicker and faster than the natural plant, making it possible to be grown for energy generation.It's a timber company's dream but a horrific industrial vision for others: massive plantations of densely planted GM eucalyptus trees stretching across Brazil, South Africa, Indonesia and China, engineered to grow 40% faster for use as paper, as pellets for power stations and as fuel for cars. The prospect is close, says Stanley Hirsch, chief executive of the Israeli biotech company FuturaGene.

The Freedom Tower Was Supposed to Be the Greenest Building in America. So What Went Wrong? Under pressure to get a publishing giant into the iconic tower, the site's developers may have sacrificed a core part of its green plans. —James West on Mon. December 8, 2014 6:00 AM PDT

Press Releases December 1999 - KENYA ADOPTS FRAMEWORK ENVIRONMENTAL MANAGEMENT AND COORDINATION ACT, 1999 Nairobi, 22 December 1999 - Klaus Toepfer, Executive Director of the United Nations Environment Programme (UNEP), today commended the Parliament and Government of Kenya on the approval of an Act which provides for the establishment of an appropriate legal and institutional framework for the management of the environment. The adoption of the new law is a milestone in the cooperation and collaboration between UNEP and the host country. The Act covers virtually all diverse environmental issues which require a holistic and coordinated approach towards its protection and preservation for the present generation without compromising the interests of the future generation to enjoy the same. Consequently, the Act provides for the legal regime to regulate, manage, protect and conserve biological diversity resources and access to genetic resources, wetlands, forests, marine and freshwater resources and the ozone layer to name a few.